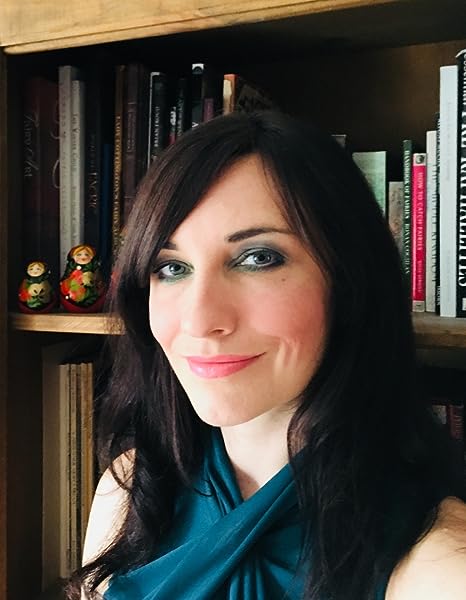 "A page-turning mystery in a world jammed with human and fairy secrets that produce danger and treachery."―VOYA

Michelle Harrison is the author of the 13 Treasures trilogy (13 Treasures; 13 Curses; 13 Secrets) which was inspired by her extensive research on fairy lore and her love of classic children's books. She lives with her family in Essex, England.
Start reading The Thirteen Secrets (13 Treasures Book 3) on your Kindle in under a minute.

4.8 out of 5 stars
4.8 out of 5
329 global ratings
How are ratings calculated?
To calculate the overall star rating and percentage breakdown by star, we don’t use a simple average. Instead, our system considers things like how recent a review is and if the reviewer bought the item on Amazon. It also analyses reviews to verify trustworthiness.
Top reviews

sonia
5.0 out of 5 stars Five Stars
Reviewed in India on 21 November 2017
Verified Purchase
A good read for those who enjoy fantasy!
Read more
Helpful
Report abuse
See all reviews

S
5.0 out of 5 stars Very exciting and thrilling all through to the end!
Reviewed in the United Kingdom on 16 April 2020
Verified Purchase
I finished The Thirteen Secrets book this morning, I have now read all the books in the series and i feel so sad to have finished them. It was in my opinion very well written, brilliant characters, great plot, so exciting and thrilling all through out! I will say this one has been my favourite book ever, so far and also my favourite out of the four in the series including the prequel (One Wish) , i just could not put this book down and recommend to anyone who wants a magical gripping fantasy page-turner with lots of excitement.
Read more
One person found this helpful
Report abuse

Phoebe Case
5.0 out of 5 stars Fabulous Gripping Mystery
Reviewed in the United Kingdom on 6 April 2020
Verified Purchase
I was gutted to put this book down. I have read the whole series and this finale really brought it to a great end. This is a super read for any age from 8 upwards. At first I wasn't that intrested in reading this series I thought it was all frilly faries but this book really shows a different side to the faries. This book got you asking questions like any good mystery but they were more like:Who has killed so and so?or Why did she do that?Michelle Harrison has written one of my favourite series ever! I would recommend to really engross yourself in this book although make sure you have read all of the others first!Have a good time with this book the murders and excitement are my favourite part Michelle describes the characters really well and this book.This series is ……AMAZING!!!!!!!!!!!!!
Read more
Report abuse

Ms. J. Clarke
5.0 out of 5 stars Such a same its the last one
Reviewed in the United Kingdom on 22 March 2011
Verified Purchase
I am well aware that I am much older than the target audience for this type of book! But I don't care, I
lead a pretty dull adult life and sometimes its nice to be able to escape into a magical story filled with
magical characters. I have decided (though I realise it is not possible) that I want my very own Brunswick
living in my garden!

The 13 series kind of reminds me of the magic faraway tree stories by Enid Blyton that I read over and over
again when I was kid, books I still own and read from time to time. (R J Andersons series is similar and
I love them just as much) I love all the characters so much, especially Tanya as she's the heroine and I
can sympathise so much with things she's experienced (not the being able to see faeries part I'd like to add)
but divorce and split families and secrets. I loved witnessing her grow and accept her abilities and responsibilities
throughout the 3 books, she really is a wonderful character and it is such a shame that this is the last we shall
hear about her.

I really don't like to say too much about plot in a review, otherwise whats the point in someone reading the book?
But I will say that the final battle that Tanya, her friends both human and fey and her family face is immense.
It far exceeded my expectations for this book. It really has matured as a series and I felt that the final
instalment really did it justice. I was not at all disappointed, and as sad as I am that the series is finished
I am sure I will read the books time and again and I eagerly await Michelle Harrisons next work.

Lovely Treez
5.0 out of 5 stars A Fabulous Finale
Reviewed in the United Kingdom on 8 February 2011
Verified Purchase
The Thirteen Secrets is the final instalment in Michelle Harrison's wonderful trilogy involving the relationship between faeries and humans. I adored her first two books, The Thirteen Treasures and The Thirteen Curses and I anticipated the latest novel with a mixture of sorrow, excitement and dread - sad because it was the signalling the end of my interaction with well-loved characters, excited to see how these characters would develop and the tiniest hint of dread that I might be disappointed. Fear ye not as the author does a fabulous job of bringing events at Elvesden Manor to a close whilst introducing us to some intriguing new characters.

I don't want to give away too much of the plot but suffice to say that you are in for a real treat. Rowan (Red) is living at Elvesden Manor and she is doing her utmost to lead a "normal" life with Tanya, Fabian and co. Of course "normality" is off the menu when you live in a fairy-infested house, fairies in the grandfather clock, a tea caddy brownie in the kitchen complete with walking stick and a drain dweller in the bathrooom whose belches smell like rotten eggs. However, Rowan is haunted by nightmares from the past and it would appear that everyone, human and fairy alike, is harbouring some sort of secret, some of which have dreadful consequences.

This is an even darker tale than the preceding novels, perhaps due to the increasing maturity of the characters who have already experienced the dark and light side of faeries. We have already seen the malevolence of the Unseelie Court, the random removal of human children replaced by changelings, the vindictive nature of Tanya's faerie guardian but things take an even more sinister turn in this volume with the battle between good and evil becoming a fight between life and death. Some scenes are reminiscent of the Chronicles of Narnia, especially the battle between Aslan's followers and those of the White Witch - stirring stuff which doesn't pander to those of an overly sensitive nature so expect tears amidst the smiles and rejoicing!

So, the feeling of dread has vanished but there is still some residual sadness that the 13 series is over. At least I will have the pleasure some day of reading the trilogy aloud to my daughter (who, at 7, is still at the Tinkerbell stage..) I highly recommend this whole series to children of all ages (9-99) who believe in some sort of magic and who don't automatically attribute those odd noises in the bathroom to faulty plumbing!
Read more
3 people found this helpful
Report abuse

L. R. Pritchett
5.0 out of 5 stars A fantastic ending to a brilliant series!!!
Reviewed in the United Kingdom on 1 July 2011
Verified Purchase
If your children haven't read this series, then they really should. All of the characters are very well written, intriguing and larger then life. This entire series is really good fun to read. There's plenty of magic, danger, excitement, suspence and plot twists to keep kids interested right the way through. An ancient society of humans and fairies is being hunted down, one by one, by forces unknown. If they aren't stopped soon then there will be none of them left. Red is deeply involded in the danger. Tanya, Fabian and the others are drawn in along with her. I think that this whole series if fantastic, but this is the best book yet. I liked the way that the book was left open at the end, to suggest that one day the author may come back to elvesden manor and its enhabitants to begin yet another story...
Read more
Report abuse
See all reviews
Back to top
Get to Know Us
Connect with Us
Make Money with Us
Let Us Help You
EnglishChoose a language for shopping.
© 1996-2021, Amazon.com, Inc. or its affiliates