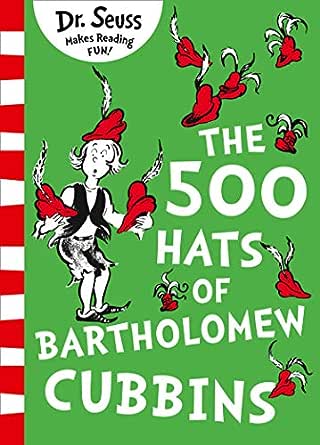 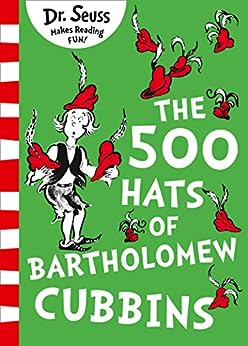 The haughty ruler of Didd, King Derwin (who would foolishly go on to summon green goo from the sky in his later years) showed the first signs of his silly self-importance back in this 1938 Seuss classic, The 500 Hats of Bartholomew Cubbins.

When Bartholomew visits town one day, selling cranberries at the market for his parents, the King's procession screeches to a halt in front of him; King Derwin then leans out of his coach, demanding to know why Bartholomew hasn't respectfully removed his hat. "But, Sire, my hat is off." He shows the king the hat in his hands that he's just doffed, but sure enough, another identical one sits atop his head. He takes that hat off only to reveal another... and another, and another, and another. Poor Bartholomew goes through 45 hats, then 136, then 233, as the angry king calls in every expert in the kingdom, from Sir Snipps the haberdasher to the Father of the Father of Nadd. In the end, Bartholomew barely gets away with his head (forget about the hats!), as Seuss spins this weird and wacky tale, a strange thing that "just happened to happen and was not very likely to happen again." (Ages 4 to 8) --Paul Hughes --This text refers to an alternate kindle_edition edition.

Illus. in color. A read-aloud telling what happened when Bartholomew couldn't take his hat off before the king. --This text refers to an alternate kindle_edition edition.

"A lovely bit of tom-foolery which keeps up the suspense and surprise until the last page."--"The New York Times."

" A lovely bit of tom-foolery which keeps up the suspense and surprise until the last page." --"The New York Times." --This text refers to an alternate kindle_edition edition.

THEODOR SEUSS GEISEL--aka Dr. Seuss--is one of the most beloved children's book authors of all time. From "The Cat in the Hat" to "Oh, the Places You'll Go!," his iconic characters, stories, and art style have been a lasting influence on generations of children and adults. The books he wrote and illustrated under the name Dr. Seuss (and others that he wrote but did not illustrate, including some under the pseudonyms Theo. LeSieg and Rosetta Stone) have been translated into thirty languages. Hundreds of millions of copies have found their way into homes and hearts around the world. Dr. Seuss's long list of awards includes Caldecott Honors for "McElligot's Pool," "If I Ran the Zoo," and "Bartholomew and the Oobleck," the Pulitzer Prize, and eight honorary doctorates. Works based on his original stories have won three Oscars, three Emmys, three Grammys, and a Peabody. --This text refers to an alternate kindle_edition edition.

Illus. in color. A read-aloud telling what happened when Bartholomew couldn't take his hat off before the king. --This text refers to an alternate kindle_edition edition.
Read more

4.8 out of 5 stars
4.8 out of 5
621 global ratings
How are ratings calculated?
To calculate the overall star rating and percentage breakdown by star, we don’t use a simple average. Instead, our system considers things like how recent a review is and if the reviewer bought the item on Amazon. It also analyses reviews to verify trustworthiness.

PR
4.0 out of 5 stars Four Stars
Reviewed in India on 16 November 2014
Verified Purchase
the quality of print/paper can be better
Read more
Helpful
Report abuse
See all reviews

VIVIENNE STUBBS
4.0 out of 5 stars Four Stars
Reviewed in the United Kingdom on 13 February 2016
Verified Purchase
it's great I think I should have ordered it in hardback though
Read more
Report abuse

S. B. Fraser
3.0 out of 5 stars The dark side to Dr. Seuss
Reviewed in Canada on 23 April 2019
Verified Purchase
I had this sent to my granddaughter because I have very strong memories of reading this when I was in kindergarten. I felt a twinge of nostalgia when I saw it offered on Amazon. What I forgot was that in kindergarten I could not read - I just looked at the pictures. Apparently, the story involves a king threatening the beheading of Bartholomew Cubbins, the main character - I just thought it was about a guy with lots of hats. Ooops! Dr. Seuss could get dark sometimes.
Read more
Report abuse

Leslie
1.0 out of 5 stars Very DARK story.
Reviewed in Canada on 5 August 2020
Verified Purchase
This is the book for you grandchildren IF you want them to read about a boy being abducted by a king, having arrows shot at him (by an archer and by the king’s nephew), being brought to a dungeon to have his head cut off, and almost being pushed over the castle turret by the king’s nephew. The good news is that the king bought the boy’s hat for a pittance and the boy went home happy.
Read more
Report abuse
See all reviews
click to open popover
Back to top
Get to Know Us
Connect with Us
Make Money with Us
Let Us Help You
EnglishChoose a language for shopping.
© 1996-2021, Amazon.com, Inc. or its affiliates