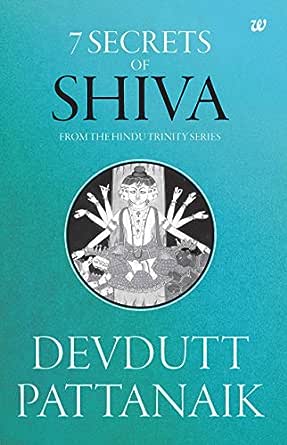 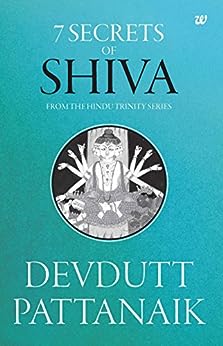 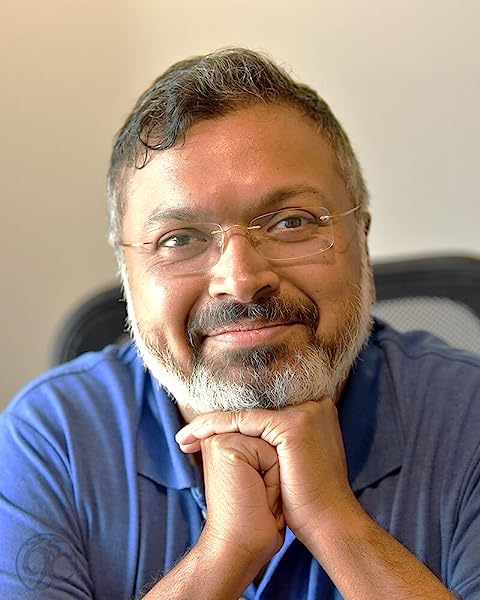 Dr. Devdutt Pattanaik is an Indian physician turned leadership consultant, mythologist and author whose works focus largely on the areas of myth, mythology and also management. He is former chief belief officer of Future Group, one of India’s largest retailers. He writes a column for the newspaper Mid-Day. --This text refers to the paperback edition.

An amazing book by Devdutt. After watching videos of devdutt on the net,was curious on his literature.This was my first book and he has impressed me a lot.Am a fan of devdutt. The simplicity,language,To The Point description,the depth,Meanings inferred and the authenticity of the content is just marvellous.This book takes you pretty deep into spirituality and lot more things that you didnt know but were following, become clear highlighting it's purpose. Having read 6 books of his(at the moment), i must say he's the one who has made mythology/Spirituality simple to understand. Hats off to him and his work !! --Abhay Vijaykumar Sep 5, 2012

Read Dr. Pattanaik's few books earlier and this one too is one of his best writings. The new channel Life Ok is airing a serial on Lord Shiva " MAHADEV" and the producers give due credits to Dr Pattanaik's writings for being the inspiration of the serial. I am neither a Shiva sadhika nor an expert in mythology but reading this great book was a soothing experience. Shiva's various aspects as Kaal Bhairav, Sundareshwar, Kashi Vishwanath, Gore Bhairav have been wonderfully ellaborated in different chapters leaving the readers spell bound and surrendered before Mahadev. Shiva's Nivratti marg as compared to Narayan's Pravritti Marg has been justified aptly leaving it to the readers to decide which is the greatest of both. --Geetha Sunil Pillai Dec 19, 2011

A really must read for everybody who wants to understand Hindu mythology or would like to classify it as erratic and out of world stories of Gods who are absent at the time of need. While i have always understood spirituality and dismissed mythology as interesting stories for kids. I find these should be the best piece of literature. Such abstract concepts are so beautifully laden that they demonstrate abstract concepts, through mundane materialistic things. Book is good but concepts concepts could be better categorized to give clearer picture --Priyanka Srivastav Apr 16, 2012 --This text refers to an alternate kindle_edition edition.

4.4 out of 5 stars
4.4 out of 5
1,025 global ratings
How are ratings calculated?
To calculate the overall star rating and percentage breakdown by star, we don’t use a simple average. Instead, our system considers things like how recent a review is and if the reviewer bought the item on Amazon. It also analyses reviews to verify trustworthiness.

KushReborn
5.0 out of 5 stars Myth breaker from a master researcher !!!
Reviewed in India on 14 May 2016
Verified Purchase
I brought the kindle version of this book. Was not sure how this would be, as the Amazon reviews were mixed. After I started reading this book I couldn't simply leave it. I read it twice, amazing research work and factual information. Those who have given this book a negative comment, in my opinion are either not ready to let go of their personal beliefs in which their culture (Sanskriti) has groomed them up or are simply defiant to accept the amazing truth behind nature (Prakriti) and mind (Purusha). Believe me, this work is a real mind changer, powerful enough to change many of your world views if you are open and ready to accept it. One of the best research work on Hindu mythology that I ever read !!! I would definitely categorize this as excellent !
Read more
97 people found this helpful
Helpful
Report abuse

This book clears the misconceptions about what Shiva is all about. Today it is easier to concentrate on the spirit of Lord Shiva, that it was earlier. Earlier it was a search for the concrete form.
Read more
23 people found this helpful
Helpful
Report abuse

Rahul Joshi
5.0 out of 5 stars Stupendous experience in experiencing Lord Shiva.
Reviewed in India on 20 September 2018
Verified Purchase
The detailed story narrative added with the anecdotes help understand why things are the way they appear. It gives in depth insight about all forms of Lord Shiva and a subtle message towards attaining Liberation. I have read many other books by Mr. DEVDUTT PATTANAIK and with every work he keeps surprising you. It has certainly left me with good knowledge about Lord Shiva at the same time also lil desire to know more about mystical ways of Lord Shiva
Read more
14 people found this helpful
Helpful
Report abuse

Sreejani
5.0 out of 5 stars Engaging one!!
Reviewed in India on 1 September 2019
Verified Purchase
Excellent words on mythology from Devdutt Pattanaik once again.. That keeps you glued to the diverse shades of shiva and the unknown stories and tes of the past.. Its a must one time read.. Engaging.. Interesting and beautifully written
Read more

5.0 out of 5 stars Engaging one!!
By Sreejani on 1 September 2019
Excellent words on mythology from Devdutt Pattanaik once again.. That keeps you glued to the diverse shades of shiva and the unknown stories and tes of the past.. Its a must one time read.. Engaging.. Interesting and beautifully written
Images in this review

Tanku
5.0 out of 5 stars Getting to know Shiva the person!
Reviewed in India on 20 December 2018
Verified Purchase
A fabulous book as expected of Devdutt!

This time his focus is on this hermit who is totally ditached from society yet gradually becomes a part of it with the help of his wife.

Books on Shiva always impressed me and overall the metaphors used for his wife and children are indeed very very impressive.

I would recommend this book to anyone who has read the other two of the trilogy or whoever is interested in knowing the deep metaphors about this hermit god.

A must for Shiva fans!

Amazon Customer
2.0 out of 5 stars Not worth the money & time
Reviewed in India on 27 October 2016
Verified Purchase
The books starts with authors note that promises to bridge the gap between Western scholars' criticism of Hindu mythology and beliefs of Hindu devotees. That Western scholars only looked at objective reality ( lingam & yoni) and overlooked the more subtle, spiritual meaning hidden in these myths. The writers effort is to explore these subtle meanings.
While this prolougue is intriguing, authors fails to deliver in the pages that follow. He takes isolated mythological stories and tries to uncover spiritual meaning in them. The meanings given are more of an individuals view. The books lacks consistency of thought and is more like jumbled representation of stories. Every page has picture ( some are really outrageous )on one side and text on the other without adequate relation between the two.

It's more of a commercial product than scholarly. Purchase if you want to read a few stories and undigested thoughts.
Read more
12 people found this helpful
Helpful
Report abuse

rahul
5.0 out of 5 stars Well explained.
Reviewed in India on 16 March 2021
Verified Purchase
A book which beautifully, gracefully and logically explain the concept of Shiva. Love the book. Finished Devdutt's Trinity series in 3 days. Love the books, i must read them again. But Amazon pls send Bookmarks with each book, don't be miser.
Read more
Helpful
Report abuse

Shivansh Yadav
5.0 out of 5 stars Jai Bholenath.
Reviewed in India on 21 November 2020
Verified Purchase
1.The packaging was not very good as tgere are two to three long vertical wrinkles as you can see.
2. This book is just amazing as you will get to know a lot about Lord Shiva and will learn many many things from it.
3. Looking for some good read? Go for it.
Read more

5.0 out of 5 stars Jai Bholenath.
By Shivansh Yadav on 21 November 2020
1.The packaging was not very good as tgere are two to three long vertical wrinkles as you can see.
2. This book is just amazing as you will get to know a lot about Lord Shiva and will learn many many things from it.
3. Looking for some good read? Go for it.

SM
4.0 out of 5 stars The concepts of Shiva is well explained
Reviewed in the United Kingdom on 2 September 2017
Verified Purchase
A book which takes you to a new perspective. Stories well narrated and logic well explained. Could have helped if the actual Devanagari scripts was used for the Sanskrit words, as an option.
Read more
Report abuse

Navindran
5.0 out of 5 stars good for some to start their spiritual journey
Reviewed in the United Kingdom on 21 February 2015
Verified Purchase
Good source material for someone who wants to know about shiva. Definitely getting book about Vishnu too. Bless you brother
Read more
One person found this helpful
Report abuse

Mohan
5.0 out of 5 stars The Mythology behind Shiva
Reviewed in Australia on 23 February 2020
Verified Purchase
This book was my introduction to Devdutt Pattanaik. He has helped me understand Shiva and for that I am most grateful. His writing is beautiful and shows deep understanding into this subject. I have become a disciple of his and now addicted to elegant style by reading more of his great works. I am indebted to him for clearing my mind of confusion regarding Indian Mythology and look forward to the next book.
Read more
Report abuse

Nani
5.0 out of 5 stars For a good understanding
Reviewed in Germany on 25 October 2018
Verified Purchase
Just great. I love that book. It is so interesting. It gives you a good and easy understanding. I do read it bit by bit because ther is so much info on one single side.
Read more
Report abuse

readable
3.0 out of 5 stars Not for the mature reader, under 18's only
Reviewed in the United Kingdom on 29 June 2013
Verified Purchase
I'm sure there's more detailed books with a better understanding, not for the mature reader. I strongly recommend this book for under 18's only. Not all written here I believe to be true in this day and age, possible Mis-conceptions along the way.
Read more
2 people found this helpful
Report abuse
See all reviews
Back to top
Get to Know Us
Connect with Us
Make Money with Us
Let Us Help You
EnglishChoose a language for shopping.
© 1996-2021, Amazon.com, Inc. or its affiliates