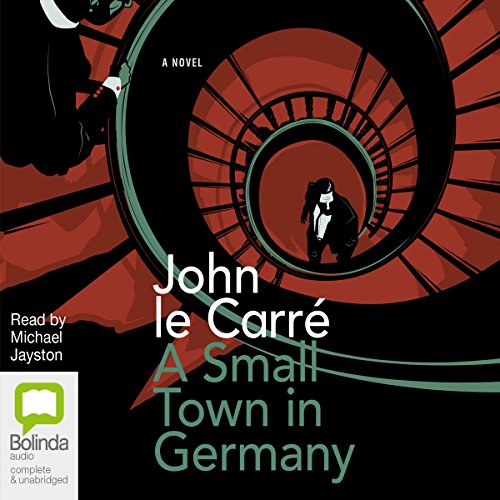 A Small Town in Germany

By completing your purchase you agree to Audible’s Conditions Of Use Amazon's Privacy Notice.
Sold and delivered by Audible, an Amazon company
Share

Luke Dennison
5.0 out of 5 stars Untouchable
Reviewed in the United Kingdom on 28 November 2019
Verified Purchase
Le Carre is untouchable as far as I am concerned. He it's not only my favourite spy writer, he is most probably my favourite writer, full stop. I had recently read the night manager and although I really liked it, I didn't love it. This however, I loved. It got me thinking, what is it about some Le Carre novels that make them greater than others and what particularly for me makes the earlier cold war novels better than the more recent output. After all, the night manager and it's ilk are surely more relevant to the modern world, they have more action.and more exciting characters don't they? So what do the earlier books have? I think what they have is a style and a slow unfurling of stories that show the great man's writing. In this case the book starts slowly and if anything it's a tad overwrought with detail and then about 50 pages in, it clicks into place and it didn't let me go. The way this man writes is genius. It's so detailed, not in action or plot but in what is said, which the plot feeds into. It covers so many themes, the characters seem so real even if the narrative explains something that most of us will never experience first hand and the level of detailing in the background just overwhelms me with its excellence. This book is a undisputed classic in my mind.
Read more
18 people found this helpful
Report abuse

Graham of Watton
4.0 out of 5 stars Beautifully crafted
Reviewed in the United Kingdom on 8 March 2020
Verified Purchase
Like all John le Carré novels, 'A small town in Germany' is beautifully crafted, but while some of his books feel a little longer than necessary, this does not. Set in the late 1960s in Bonn, the capital of West Germany, it's the story of the hunt for a missing British Embassy official , Leo Harting, along with some files which have disappeared with him. The person sent by London to investigate is Alan Turner, who is dogged in his pursuit of the truth, no matter how many people he upsets along the way.
Although much has changed since this book was written - in particular the end of the Cold War and the re-unification of Germany - this makes 'A small town in Germany' a more, rather than less interesting book to read. For example, I found it slightly ironic that at the time, Britain was desperate to join the Common Market (as it then was) whilst Germany was far from enthusiastic about such a move.
Like many people, I happen to think the George Smiley books are le Carré's most enjoyable, but this is one of his others which I would definitely recommend.

Jippu
2.0 out of 5 stars Le Carre is much overrated
Reviewed in the United Kingdom on 10 November 2020
Verified Purchase
I have recently returned to reading Le Carres older works which I remember reading and liking very much when they appeared. They have not aged well. Now I find le Carres baroque constructions annoying. Nothing is straightforward, a lot is very opaque, the characters are very vague and the plots are really not very logical. Take the Honourable Schoolboy (second book of the Karla Trilogy). Here we have in the first part an interesting revelation of a a money pipeline, but then it is completely forgotten in the second part where a mysterious brother comes from China (what has he been doing there?) and is caught by the Americans thanks to the very complicated legwork by Smiley. And then we have the "honourable schoolboy" who complicates the situation and errs impossibly around Cambodia, Vietnam, Laos during the chaotic last days of Saigon and Phnom Penh. And Karla is almost invisible here. So it is very unclear, to say the least.
Read more
Report abuse

Glyndower
5.0 out of 5 stars 1960s Atmosphere
Reviewed in the United Kingdom on 26 September 2020
Verified Purchase
Although the plots of le Carre's early novels are rather thin, his brilliance as a writer lies in his abiliity to evoke period atmosphere and detail. Although written over 50 years ago, 'Small Town' remains relevant to a post-Brexit world and is worth reading by anybody with an interest in modern literature.
Read more
3 people found this helpful
Report abuse

Jl Renals
4.0 out of 5 stars A good old fashioned mystery
Reviewed in the United Kingdom on 29 September 2017
Verified Purchase
I liked this story. Sometimes I'd find a paragraph hard to follow (e.g. if the character had been beaten up the narrative style reflected his confusion). However, Le Carre spends most of the book building up a patchwork picture of the apparent defection of an embassy worker in Bonn, and then brings it together with a satisfying reveal - one which asks moral questions as you'd expect. Worth reading twice.
Read more
6 people found this helpful
Report abuse
See all reviews
Back to top
Get to Know Us
Connect with Us
Make Money with Us
Let Us Help You
EnglishChoose a language for shopping.
© 1996-2021, Amazon.com, Inc. or its affiliates