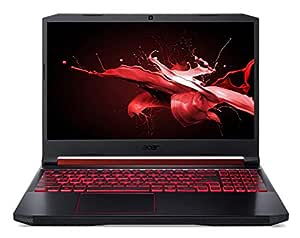 Visit the Acer Store
4.3 out of 5 stars 146 ratings
| 113 answered questions
7 Days Replacement
Warranty Policy
Warranty Policy
One-year International Travelers Warranty (ITW)
Currently unavailable.
We don't know when or if this item will be back in stock.
› See more product details

This product is available as Certified Refurbished.

The Key to Victory

Commands are just a touch away with the dedicated NitroSense Key, while the WASD and arrow keys are highlighted for easy location. Enjoy the tactile feel of keys with a travel distance of 1.6 mm. Add some excitement to your gaming and play in dimly lit environments with the red backlit keyboard.

When heavy use requires an added boost, chill out with twin fans, Acer CoolBoost technology and a dual exhaust port design. CoolBoost increases fan speed by 10% and CPU/GPU cooling by 9% compared to auto mode. Monitor and manage your system in real time with NitroSense, covering temperatures, fan speeds and more.

Plug all your peripherals into the full range of ports, including HDMI 2.0, USB Type-C Gen 1 and more.

4.3 out of 5 stars
4.3 out of 5
146 global ratings
How are ratings calculated?
To calculate the overall star rating and percentage breakdown by star, we don’t use a simple average. Instead, our system considers things like how recent a review is and if the reviewer bought the item on Amazon. It also analyses reviews to verify trustworthiness.

Harshit
5.0 out of 5 stars Well, exactly what you should expect.
Reviewed in India on 6 October 2020
Verified Purchase
OK, here I should clean up some confusion.
The storage is PCIe NVME, and this is exactly that device that's shown and described. No, the display is a 60 hz panel only, its not 144Hz, which is to be expected. I did try to overclock the refresh rate using CRU to 75 but display went black, so you can try, but on your own risk, I had to roll back to 60.
There's a lot of bloatware removal and updates to do, which I do as I type this, also, talking of software, windows 10 home will come pre-installed activated, its not pro, so, if you need some features like enhanced bitlocker and stuff, you can upgrade. The office 365, however, is only trial version.
Though this is a gaming laptop, the build is not too flashy, which I like. There's quite a bit of screen flex, and whole thing is a fingerprint and smudge magnet, though cleaning it off is very easy. Even though it has a 8 gigabyte stick, only 6 is usable by default, that Amd vega do take up system memory, which I think can be disabled, by some trick that I yet don't know. So, I am just going to push in another 4gb module, it has two slots.
.
Edit: After around a week or so of use, I played only two games and pushed CPU hard through some applications. Battery life is excellent, around 5-6 hours on non gaming average use with wifi and Bluetooth on because Nvidia GPU remains off when not needed, so that 2 gb ram capture by Vega 8 is, I think worth it. The main bottleneck of the default configuration will be ram though, so it is highly recommended that you increase it by using other slot, additionally using benefits of dual channel. With 6 gb ram, PUBG lite for PC goes easily upto 140 FPS in High settings, view distance and texture set to Ultra, and this machine can easily run PUBG and Warzone too, around 40-50 fps in medium settings, but if you use second stick, you'll get a better performance. Cities Skylines was super smooth without any stutters.
Photoshop is a breeze, and on premiere pro, well, 6 GB ram isn't enough, straight away. You can edit 1080p videos easily, maybe 4k, but you need more ram for even a 15 minute video, if you work with raw footage. Coding, on lighter programs like visual studio is nice, well, it doesn't takes up much resources. I also tried stacking 4 gigabytes of Raw picture data of deep sky on DSS, and this machine took around 20 minutes to render the image. I am happy with the performance, and with these light tasks, I saw no thermal throttling whatsoever as of now, but then again these were not very heavy tasks and I physically live at a much cooler place than rest of India, in lower Himalayas. Fans get loud when gaming or in cpu intensive tasks, but usually they are very silent, also, you can manually monitor the temps and fan through nitrosense, which oddlg enough has a dedicated key. Laptop has great ventilation with vents on side, back and bottom, so if you use this slightly lifted off of the ground or table, I think it'll help.

anisha
1.0 out of 5 stars Confusing Description of Specs.
Reviewed in India on 9 October 2020
Some specs in the description are wrong and create confusion. One review says that the refresh rate is only 60hz, when the description mentions higher refresh rate. In another section it mentions a one TB HDD, and in title it says a 512HB SSD. I suggest the seller to kindly update them.
Read more
94 people found this helpful
Helpful
Comment Report abuse

Sonu S
5.0 out of 5 stars Value for money... Great performance at this price
Reviewed in India on 6 October 2020
Verified Purchase
Value for money....
Great spec at this price....
Boot up speed is some what like magical for me...because of nvme ssd..
Only 6gb of ram can be usable out of 8 gb ram... Because of the reservation of two gb ram for the integrated GPU.. so you have to upgrade it...

saikiran
4.0 out of 5 stars Impressed!!!
Reviewed in India on 14 October 2020
Verified Purchase
Well I have to say I'm impressed with this machine. The one I liked the most in this laptop is thermals. It cools down the system very well and also the best when compared to competition like Asus tuf or pavilion gaming 15. One of my friend recently purchased HP 15 pavilion gaming and trust me it throttles very high and thermals are poor in Hp. This made me to choose acer for me. Also acer has colorful display than Hp. Acer has 275 brightness nits where as Hp pavilion has only 250 nits so does acer tuf 250 nits. Nitro 5 is clear winner in regards to thermals and display. SSD boots my like flash in 2-3 seconds. Played Doom eternal, witcher 3, Valorent, rocket league, GTA 5 all are giving good refresh rates.
Read more

Niket Kumar
5.0 out of 5 stars Worthy to buy and value for money 🙂
Reviewed in India on 26 October 2020
Verified Purchase
I would not waste my and your time by mentioning the specs already mentioned in the description.
Let me talk point to point : -
1) Performance : 5/5 The AMD and Gtx 1650 are a beast in this budget. U can't expect getting ryzen 7 / i7 performance or gtx 1660ti/2060 in this budget !!

2) Thermals : I would must say best in this segment. The temps are constantly below 35 on normal use. I have asus tuf fx505 but the thermals sometimes seems to inadequate. So far this one has the best laptops so far.

3) Battery🔋 : Again one of the best in the budget considering it is a gaming laptop. U can easily expect 5 to 6 hours on normal usage with 50 % brightness. Personally I never game on a laptop without plugged in. I recommend u to game while the charger being plugged in for best performance.

I also got a cool sticker along with the lappy ! So thnx to Acer for that !

The only and only con I found is the usable ram which is around 5.94 Gb out of 8 Gb (Around 2 gb is taken by the integrated graphics vega which helps in saving the battery !). I would be upgrading it in future , as my present requirements are met with 6 gigs of memory!

Would be regularly updating this review in future !
Hit the helpful button 😇😇
Read more

Prem
5.0 out of 5 stars Awesome
Reviewed in India on 10 October 2020
Verified Purchase
The Laptop comes in a proper packing & inside is this premium laptop there . Everything is top notch. 1650 gtx graphics and 8gb with 500 SSD approx. Can expand ram to 32 gb and ssd to 2tb. Worth the prize. Note- this model doesn't comes with a rgb keyboard but have a red backlit keyboard which makes up the difference as the other features are up to date. Worth buying .
Read more