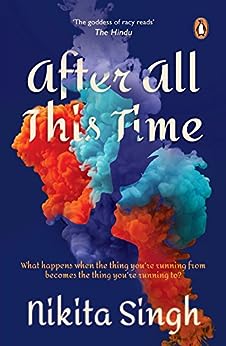 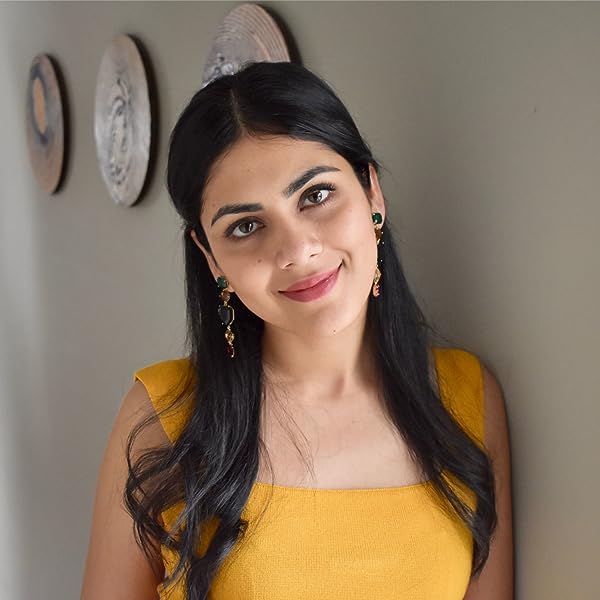 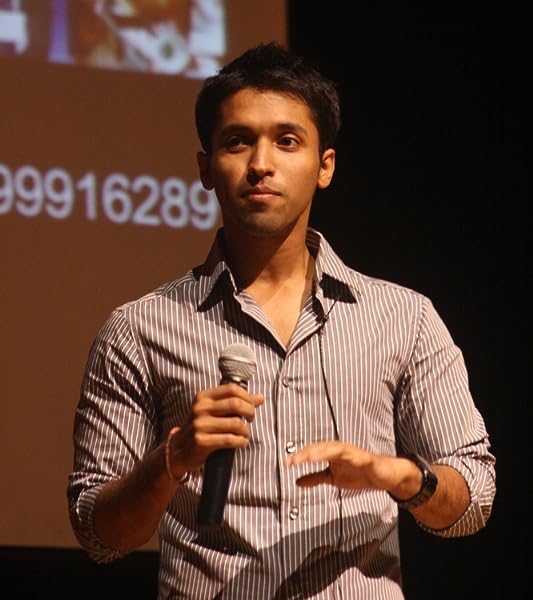 After All This Time Kindle Edition

this book will make u happy.It is not that great like other writings of Nikita Singh.honestly i should give *** to this book but i like nikita singh writtings that's y i give ****. Must read. --Rojesh Mishra on Jul 8, 2015

Its a good read but not a great one. If compared with Nikita Singh's other books this has yet to reach that level. The ending turned out to be a quick wrap up of the story. --Anandhu Mohan on Jul 2, 2015

What an awesome book Nikita,I received book yesterday and finished it today.I am a big fan of your writing and have read all your books.This is one of the finest and interesting book i ever have read. Lavanya's character is well portrayed.well done,keep up the good work! --Sindhu on Jun 24, 2015 --This text refers to an alternate kindle_edition edition.

Nikita Singh is the bestselling author of six novels, including Love@Facebook, Accidentally in Love and The Promise. She has coauthored two books with Durjoy Datta, titled If It's Not Forever and Someone Like You. She has also contributed to the books in The Backbenchers series. She was born in Patna and grew up in Indore, from where she graduated in pharmacy. Nikita received a Live India Young Achievers Award in 2013. With a library stocked with over 12,000 books, she is a voracious reader and adores her collection of fantasy novels. She is a cricket enthusiast and enjoys a good cardio workout. --This text refers to an alternate kindle_edition edition.

4.2 out of 5 stars
4.2 out of 5
111 global ratings
How are ratings calculated?
To calculate the overall star rating and percentage breakdown by star, we don’t use a simple average. Instead, our system considers things like how recent a review is and if the reviewer bought the item on Amazon. It also analyses reviews to verify trustworthiness.
Top reviews

Rahul Rai Khatri
4.0 out of 5 stars Leaves The Reader With a Smile !
Reviewed in India on 3 June 2015
Verified Purchase
Woooooo ! A Complete Emotion pack Book which led the reader on journey from Sorrows , worries , depression , happiness, friendship , betrayal , cheating and true love . Author has presented the story in a promising way . Every single line leaves the thread that the story is pen down by a Mature but young author which She is .
Begininng with Front Cover - Book has a beautifully done cover with Dark Bluish Colour on upper row and lightend as coming in the bottom with Author's name written on the bottom , then beneath it comes Praise from the Hindu and beneath is the Name " After All This Time " in yellow and an artistic view of a landscape portraying a Guy and a girl standing on the horizon staring at stars with their bike parked along . This artistic view had been taken from a prose inside the book .

Back Cover worked with same background colour over which is a short transcript about the inside story .

Coming to writting . Whole plot is written in third person and As i wrote above , Being a mature author , she'd put some difficult words too in order to ensure that reader not just enjoy but also get benefited in term of his/her vocabulary .
The story revolves around Shourya and Lavanya as main protagonist and started with lavanya , a harvard graduate , who was working in a company named PSM in Newyork under a ruthless boss Carter and events revolved in a manner that a day comes when she was diagnosed with HIV and with same erupts her anger over Mr. carter for exploiting her and Days later , she fly down to her hometown New Delhi .Shourya on otherside working as well as studying for further courses , passed out from UCB . He flied down to californis years ago with her girlfriend Deepti to pursue higher studies . In Delhi he tutored his gf for harvard and even left the chance to study at harvard because she wasn't able to make it to harvard . He satisfied himself with UCB , which was the only common college they were able to place and years later settling to US , he found out that her gf cheated on him and had a affair with his roomie . Few months later , he visited back to New Delhi for his Sister's wedding and its revealed that lavanya and Shourya were best friends since KG and they pick up relationship from where they left as best friends . Time pass and as the day of return of Shourya gets nearer , they felt they are nothing without each other .
With this sweet love story , Author also revealed a harsh relationship of a Daughter and a father . A daughter who hate her father for being in a extra-maritial affair with a teacher which cost her lot of embarassment in school years later which later soughted out as both Lavanya and her father settled to talk . This instance was put to let the reader know that People do mistake but if they are truly sorry for that , then they deserve another chance too .
Another interesting instance that author had put in the book is " Toughy " , lavanya's dog who lost one leg while fighting from dogs when he was of few days . Toughy was portrayed as cheerful and enjoying throughout the book and lavanya's love .
This book let the reader believe that everything happens for a reason and even bad things too happen for a reason which ultimately is for our own good in future . We usually ignore the people who truly care for us and run for those who are good in pretending things . So SHOULD NOT LET TRUE PEOPLE SLIP YOUR HAND
In short its a Emotion pack book . Must Read and
" ... wondered if there was anything better than being married to her best friend "
Read more
5 people found this helpful
Helpful
Report abuse

Arvind Menon
5.0 out of 5 stars The Best Book Of Nikita
Reviewed in India on 8 March 2018
Verified Purchase
To
When the book "THE PROMISE" by the same author was released, I bought it with a dual mindset of how the whole plot would go and how it would make me feel. In the end, I felt it wasn't just a book. It was a journey of emotions, a path of love and a story so flawlessly told that you will never want the story to end, like EVER!
AFTER ALL THIS TIME
I have read numerous books. Never I saw a plot which grips me till the end continuously. I love reading books slowly. I love feeling the emotions told by the author. Anger, I would feel angry. Love, I would feel extremely happy. I would take each and every emotion and this is one of such kind. It was so beautifully taken and you can literally relate yourself with the world portrait in it.
Lavanya, what a beautiful name firstly. I started loving this book even more.
Trust me when I say this, If you are a reader who loves Romance, Twist and a plot which revolves across cultures, then this book is the bestest of best of all!
LOVED IT
Read more
3 people found this helpful
Helpful
Report abuse

Shilpa
5.0 out of 5 stars Impeccable book..
Reviewed in India on 15 June 2019
Verified Purchase
A very nice piece of writing by Nikita Singh. She has beautifully described every incidents which happend in character's life. Also a very good description about Lavanya's relation with her father n the happy climax is something I was expecting. Family came together n so does Lavanya n Shaurya.
Read more
Helpful
Report abuse

Gaurav Gupta
5.0 out of 5 stars Just Loved It From The Core Of My Heart!!
Reviewed in India on 7 July 2015
Verified Purchase
First thing it was a personally signed copy by Nikita so it was a special one.
It is a beautiful journey which is filled with all the emotions possible. Lavi and Kapoor both are just 2 gud and I like to mention that writing on HIV is not was to kudos to Nikita Singh for that. When it was about end I felt sad that it must be going on . And the author just portrait all the characters and sequences so beautifully and it is the best work by Nikita Singh. I just loved reading this one and it has all bags of love and emotion.

It's dedicated to all those who refuse to lose faith in love , despite the pain and horror and torment that accompany it.

Binoy
5.0 out of 5 stars 10 out of 10 in the story
Reviewed in India on 11 June 2015
Verified Purchase
Nikita ma'am has wrote a full on dramatic,heart sobering book... the plot was really good ....HIV!! ...who could have thought it as a main plot!! really you rock on it!!!....... it seems as if it is season of friendship... all u authors are writting well on friends,best friends!! first sudeep sir's YATPTML,then Durjoy sir's WBB,then sumrit's NKYBF then AFTER ALL THIS TIME its your book.... which was as awesome as those.... i loved reading it...even i have recomended it to my best friends...
cheers!! keep writting awesome books
Read more
One person found this helpful
Helpful
Report abuse

Sweta Kunwar
5.0 out of 5 stars Engrossing!
Reviewed in India on 25 June 2015
Verified Purchase
I loved reading it. It was such a page turner that I felt bad that I finished it already. Nikita has the charm. It made me smile so many times, Shourya’s good sense of humour and Lavanya’s crave for adventure and ticking off her to-do-list and the bond of friendship they shared. Other than this, it was emotional, both the protagonists had a tangled life, one was running away constantly while the other messing up into the same situation and couldn’t get certain thoughts out from the head. And also Toughy is the best character, so adoring lovable and Mr. Cather, the exact opposite.

P.S: I wanted to add more about the book, but it would give away half the story or full. It’s recommended to everyone who believes in love and wants to have a good time.
Read more
2 people found this helpful
Helpful
Report abuse

Gayatri M Das
4.0 out of 5 stars Amazing book!
Reviewed in India on 20 June 2019
Verified Purchase
This is one of the best books written by Nikita Singh. The story is written soo beautifully that one can feel the emotions while reading. I recommend it for all the book lovers. #personallylovedit
Read more
Helpful
Report abuse

Aman Parihar
4.0 out of 5 stars Good Read
Reviewed in India on 28 July 2015
Verified Purchase
first of all the delivery was quick and good. Thank you Amazon and the seller for that.
Nikita Singh's novels in general are good and pleasure to read but, this one is better than the rest. It has the depth needed for the topic and i am in love with the both characters. Lovely writing. Keep up the good work.
Read more
Helpful
Report abuse
See all reviews
Back to top
Get to Know Us
Connect with Us
Make Money with Us
Let Us Help You
EnglishChoose a language for shopping.
© 1996-2021, Amazon.com, Inc. or its affiliates