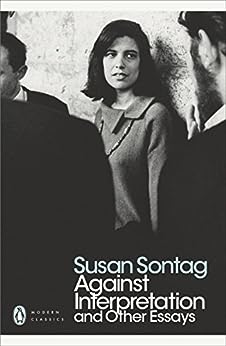 Against Interpretation and Other Essays (Penguin Modern Classics) Kindle Edition

'A dazzling intellectual performance.' Vogue --This text refers to an alternate kindle_edition edition.

llection of essays by the brilliant critic and writer to be published in book form, containing her best writings between 1961 and 1965. --This text refers to an alternate kindle_edition edition.

The first collection of essays by the brilliant critic and writer to be published in book forrn, containing her best writings between 1961 and 1965. --This text refers to an alternate kindle_edition edition.

Susan Sontag was born in Manhattan in 1933 and studied at the universities of Chicago, Harvard and Oxford. Her non-fiction works include Against Interpretation, On Photography, Illness as Metaphor, AIDS and its Metaphors and Regarding the Pain of Others. She is also the author of four novels, a collection of stories and several plays. Her books are translated into thirty-two languages. In 2001 she was awarded the Jerusalem Prize for the body of her work, and in 2003 she received the Prince of Asturias Prize for Literature and the Peace Prize of the German Book Trade. She died in December 2004. --This text refers to an alternate kindle_edition edition.

Against Interpretation was Susan Sontag's first collection of essays and made her name as one of the most incisive thinkers of our time. Sontag was among the first critics to write about the intersection between 'high' and 'low' art forms, and to give them equal value as valid topics, shown here in her epoch-making pieces 'Notes on Camp' and 'Against Interpretation'. Here too are impassioned discussions of Sartre, Camus, Simone Weil, Godard, Beckett, Lévi-Strauss, science-fiction movies, psychoanalysis and contemporary religious thought. Originally published in 1966, this collection has never gone out of print and has been a major influence on generations of readers, and the field of cultural criticism, ever since.

4.7 out of 5 stars
4.7 out of 5
196 global ratings
How are ratings calculated?
To calculate the overall star rating and percentage breakdown by star, we don’t use a simple average. Instead, our system considers things like how recent a review is and if the reviewer bought the item on Amazon. It also analyses reviews to verify trustworthiness.
Top reviews

christo
1.0 out of 5 stars Copy not good
Reviewed in India on 20 October 2020
Verified Purchase
They have taken a print of the original copy.
Read more
One person found this helpful
Helpful
Report abuse
See all reviews

Cliente Amazon
5.0 out of 5 stars Amazing Sontag book
Reviewed in the United Kingdom on 27 January 2019
Verified Purchase
One of the most fascinating reflection on the art critic!! Still updated!!
Read more
Report abuse

Tufnell Paul
3.0 out of 5 stars Notes from a Bygone Age
Reviewed in the United Kingdom on 13 August 2016
Verified Purchase
I am old enough to remember the early 1960s. Looked at in retrospect, one of the surprising things about the late 1950s and early 1960s is just how superior we were given to believe French culture was. It had the best food and wine; cuisine was after all a French word. They knew more about sex than other nations and, moreover, knew how to enjoy it, lots of it allegedly. The nouvelle vague was then at its height and consequently their film industry was the last word in cool. Then there was Jacques Brel and Edith Piaf. And perhaps, above all, their intellectuals had a sophistication and popularity the intellectuals of other nations could not match. They were left-wing; they smoked and hung around in bars and cafes on the Left Bank, discussing the meaning of meaning; they listened to cool jazz; and they had theories that were so complicated that they burst through the boundaries of everyday language into the most abstruse abstractions.
So it was that, when in 1957 clever, young Susan Sontag decided that the tweediness of Oxford University did not suit her, she went to Paris. This was a turning point in her life and, after returning to New York, she devoted much of the remainder of it in the wholesale import of French ideas into North America. This book of essays is the earliest expression of this.
The French intellectual that leaves the largest trace on Against Interpretation is Roland Barthes. In fact, so well did Sontag learn at the foot of the master that Notes on “Camp”, the stand-out essay in this book, could almost be a chapter from his own classic collection of essays Mythologies.
The key French ideas are all here. The title essay is a plea for a work of art not having to mean anything; it should just be. She rejects old ideas of narrative structure – no more beginning, middle and end. She speaks for form over substance. But she is smart. She knows her audience. She does not try to épater la bourgeoisie as the French intellectuals did. Prior to 1968, the French liberal classes did not seem to mind being the butt of the intellectuals’ rhetoric; in fact with typical French sophistication they seemed to find it amusant. Wealthy American readers of the high-brow literary New York magazines were not so indulgent. So Sontag plays down the left-wing politics, to point of invisibility. Moreover, in deference to the stylistic requirements of these magazines, she uses short sentences and crystal clear prose, and, tellingly, avoids jargon, philosophical, critical or political. This takes her a long way from her French masters, who loved obfuscatory jargon, buried their ideas in impenetrable prose to give them more weight and were above all else engagé.
On at least one occasion, Sontag allows her Francophilia to cloud her judgement. Bresson, she writes, “is a far greater director than” Bunuel, Bergman and Fellini. I confess that I nearly dropped my tablet when I read this. From a viewpoint of 50 years later, I have the latter three, along with Kurosawa and Welles, in my list of the five greatest film directors of my lifetime and I have Robert Bresson somewhere in the late forties just behind Tony Scott. I think Sontag may have been being deliberately provocative, but, since this assertion appears very early in the first essay of the film section (The book is divided into five sections, each covering essays on the same general theme: critical theory, writers, theatre, film and other.), I lost faith in her credibility as a film critic from the outset.
A book of literary and philosophical essays from 50 years ago naturally becomes dated. Actually the film section stands up rather well, dealing with Godard and Resnais as well as Bresson, although, unless you are an extreme Warholian or a Velvet Underground completist, you probably will not know of Jack Smith. But the section on writers really shows how times have moved on. I did not know of Michel Leiris or Nathalie Sarraute. Who reads Cesare Pavese now? Simone Weil or Georg Lukács, once so all pervasive, are less and less read and even poor Albert Camus seems to be going the same way. As for Jean Genet, he is in the dustbin of history, where he probably should have remained in the first place.
Notes on “Camp” aside, I cannot recommend this book unless you are trying to (re-)connect with the early 1960s. This world of self-conscious intellectualism, where middle-aged French academics were kings, was swept aside by “pop” in all its meanings – the Beatles, Bob Dylan, Andy Warhol, Easy Rider and all the rest. Jean-Paul Sartre and others tried to save themselves by hitching onto the 1968 événements. In the event, 1968 became the year of Pompidou and Nixon and the writing was on the wall for French intellectualism.
Read more
32 people found this helpful
Report abuse

Tony M
5.0 out of 5 stars S. Santag
Reviewed in the United Kingdom on 3 February 2014
Verified Purchase
Sontag was a find for me and I am gradually reading through all her non fiction works, philosophical ones!
Clear insightful writer. Great thinker!
The book arrived all well, as described, well packed etc. nice purchase and will take a second reading some time!
Read more
One person found this helpful
Report abuse