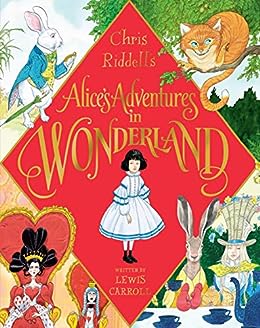 ...this reimagining is uniquely Riddell, and every bit as sumptuous as you would expect ― The Bookseller

Chris Riddell joins the crowd of illustrators who have visualized Alice since John Tenniel. Whereas ― to choose one notable predecessor ― Helen Oxenbury made the text fresh and cozy, Riddell has reinstated its oddness with his glamorous, fantastical caricatures and super-skillful line. He has also made the Mad Hatter female ― The Times and Syndicates

He has now taken on the big challenge: Alice’s Adventures in Wonderland. As with all his pictures of children, Alice is huge-eyed and delicate, but his cartoonist’s eye means he does a lovely Gryphon and Mock Turtle. This is quite a hefty hardback. ― The Spectator

Another classic gift for Christmas is Chris Riddell's Alice's Adventures in Wonderland, a brilliant full-color illustrated edition. Many great artists have drawn Alice, but I think this sumptuous hardback and jacketed version by the ex-Waterstones Children's Laureate is my personal favorite. Lewis Carroll's story is more than 150 years old, but the drawings are brand new and quite stunning. Every page has something to look at - from the map of Wonderland at the beginning to the amazingly detailed and amusing depictions of favorite characters such as Alice herself, White Rabbit, Cheshire-Cat, the Mad Hatter and Queen of Hearts. We famously follow Alice down the rabbit hole to a world full of crazy creatures, magic... and danger. Decapitation-crazed queens must be avoided at all costs! It's a very readable story for young people - a bit mad, but still great after all these years ― Bath magazine and Bristol magazine

This really is a collector’s hardback edition – the spine is about 4cm thick! – and it is a book you will treasure forever. A perfect Christmas gift! -- Picture Book Perfect

This is a treasure of a book, with a gold-foiled dust-jacket, classic endpapers, a yellow ribbon marker, and stunning illustrations (both black-and-white and full-color) on every page. There is even a full-color map of Wonderland depicting the key localities (including the White Rabbit’s House, The Queen of Hearts’ Croquet Lawn, and the Hatter’s House). Swipe through for a little peek inside. The forward by Chris Riddell discloses the huge influence that this classic book and John Tenniel’s illustrations had on his childhood, even inspiring him to become an illustrator of children’s books! He has achieved a remarkable feat in this new reimagining of Alice’s tale, and it is clear that much thought and love has gone into every detail. This new edition would make a wonderful gift for both little and big Alice fans, and is definitely one to treasure! -- Little Library Owl

Take Lewis Carroll’s eternally enchanting classic tale of Alice’s Adventures In Wonderland, bring them to life with the unique illustrations of the talented Chris Riddell, and you have this year’s dream gift book for readers of every age. First published by Macmillan in 1865, Carroll’s iconic story – starring one the most popular female characters in English literature – has been loved and enjoyed by generations of children, and this sumptuous hardback, gold-foiled and jacketed edition is brimming with Riddell’s gloriously imaginative color illustrations. And Costa Award- and Kate Greenaway Medal-winner Riddell certainly works his creative magic on this stunning edition which has been published in celebration of the 200th anniversary of the birth of the book’s original illustrator, Sir John Tenniel, who was a cartoonist for Punch. And in a pleasing stroke of serendipity, Riddell is also an exceptional artist and political cartoonist for The Observer, creating some of the best loved and instantly recognizable illustrations of the 21st century. Riddell’s rich and evocative interpretation of Carroll's world brings new light and life to Alice’s memorable journey of trials and tribulations in the company of the charming White Rabbit, the terrifying Queen of Hearts, the intriguing Mad Hatter, the grinning Cheshire Cat, and many other well-known eccentric characters. With a ribbon marker to complete the package, this is the perfect gift for families, children and all fans of an all-time classic ― Lancashire Evening Post and Regional Syndicates --This text refers to the hardcover edition.

Lewis Carroll's Alice's Adventures in Wonderland has delighted and entranced children for over a hundred years. Lewis Carroll was the pen-name of Charles Lutwidge Dodgson. Born in 1832, he studied at Christ Church College, Oxford where he became a mathematics lecturer. The Alice stories were originally written for Alice Liddell, the daughter of the dean of his college

Chris Riddell, the 2015-2017 UK Children's Laureate, is an accomplished artist and the political cartoonist for the Observer. He has enjoyed great acclaim for his books for children. His books have won a number of major prizes, including the 2001, 2004 and 2016 CILIP Kate Greenaway Medals. Goth Girl and the Ghost of a Mouse won the Costa Children's Book Award 2013. His work for Macmillan also includes the bestselling Ottoline books, The Emperor of Absurdia, and, with Paul Stewart, the Muddle Earth books, the Scavenger series and the Blobheads series. Chris has been honoured with an OBE in recognition of his illustration and charity work. He lives in Brighton with his family. --This text refers to the hardcover edition.

4.9 out of 5 stars
4.9 out of 5
117 global ratings
How are ratings calculated?
To calculate the overall star rating and percentage breakdown by star, we don’t use a simple average. Instead, our system considers things like how recent a review is and if the reviewer bought the item on Amazon. It also analyses reviews to verify trustworthiness.
Top reviews

Anunay Bhargava
5.0 out of 5 stars Good book
Reviewed in India on 28 November 2020
Verified Purchase
It has been a favourite since childhood.
Read more
One person found this helpful
Helpful
Report abuse
See all reviews

Marie Ann Rich
5.0 out of 5 stars Just what I wanted
Reviewed in the United Kingdom on 15 March 2021
Verified Purchase
Beautiful book, powerful images amongst the text. Captured the attention of my 3 year old for quite a while. Think she might come back to it when she's older, due to content of the text and nature of the story. Hardback cover feels and looks really nice. Artwork is incredible.
Read more
Report abuse

Fulk Nerra
5.0 out of 5 stars A great edition
Reviewed in the United Kingdom on 13 January 2021
Verified Purchase
A Christmas present for a life-long Alice enthusiast. She is really pleased with this addition to her collection.
Read more
One person found this helpful
Report abuse