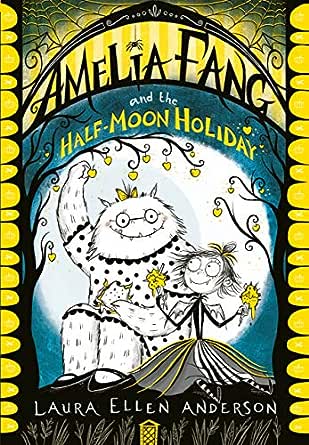 Subtotal ₹
Cart
View your cart
To add this eBook, remove any 1 eBook from your cart or buy the 25 eBooks present in the eBook cart
Review items in your cart
There was a problem adding this eBook to the cart
Kindle Edition
₹ 402.78 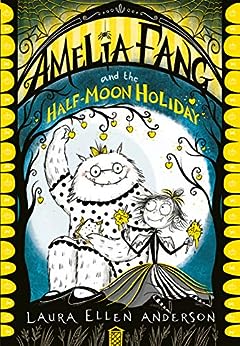 The perfect mix of funny, foul and fearful

Laura Ellen Anderson is a professional children's book author and illustrator, with an increasing addiction to coffee. She spends every waking hour creating and drawing and would quite like to live on the moon when humans finally make it possible. Laura is the creator of EVIL EMPEROR PENGUIN and illustrator of WITCH WARS, as well as many other children’s books. AMELIA FANG is her first series as author-illustrator. --This text refers to an out of print or unavailable edition of this title.

4.8 out of 5 stars
4.8 out of 5
266 global ratings
How are ratings calculated?
To calculate the overall star rating and percentage breakdown by star, we don’t use a simple average. Instead, our system considers things like how recent a review is and if the reviewer bought the item on Amazon. It also analyses reviews to verify trustworthiness.

P. Keeling
5.0 out of 5 stars New Amelia Fang and it pleases my gang!
Reviewed in the United Kingdom on 15 March 2019
Vine Customer Review of Free Product( What's this? )Verified Purchase
My daughter (9) really really really loves these books and this new one has in just a day been read from cover to cover. Old characters are still there and a few new ones too! The read is easy, with great twists and turns in the plot and the illustrations are great (as always). Even better is the fact that the author is very approachable on Twitter / Facebook and quickly responds to any questions, pictures or observations my daughter wants to share... this in itself is fantastic and we support all and any books by her!
Read more
2 people found this helpful
Report abuse

C. Donkin
5.0 out of 5 stars The sign of a great book!
Reviewed in the United Kingdom on 4 May 2019
Verified Purchase
My 7 year old daughter loves this series and has had her head in this book since she received it. It kept her bed this morning, reading until she finished it.
The story made her both laugh out loud and cry!
Read more
One person found this helpful
Report abuse

jenni
3.0 out of 5 stars Great series but poor craftsmanship of the book itself
Reviewed in the United Kingdom on 7 August 2020
Verified Purchase
Whilst my daughter is loving this series of books so much We are really disappointed with the quality of the book itself. The last two and this one as she’s turning a page it’s falling out. The bind isn’t holding the pages in. She gets really upset about it too.
Read more
Report abuse

kee
5.0 out of 5 stars Another fun read for daugther
Reviewed in the United Kingdom on 28 August 2020
Verified Purchase
My daugther is a fan of these books and she enjoyed this one as much as the others. Arrived well packed and fast.
Read more
Report abuse

Buzord
5.0 out of 5 stars 7 year old wont put it down
Reviewed in the United Kingdom on 12 January 2020
Verified Purchase
My 7 year old daughter loves this series. Any book that grips a young child and makes them want to continue reading get 5 stars from me.
Read more
Report abuse
See all reviews
click to open popover
Unlimited FREE fast delivery, video streaming & more
Prime members enjoy unlimited free, fast delivery on eligible items, video streaming, ad-free music, exclusive access to deals & more.
> Get started
Back to top
Get to Know Us
Connect with Us
Make Money with Us
Let Us Help You
EnglishChoose a language for shopping.
© 1996-2021, Amazon.com, Inc. or its affiliates