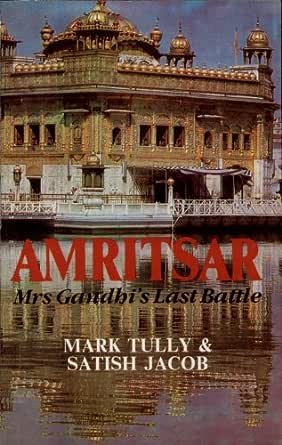 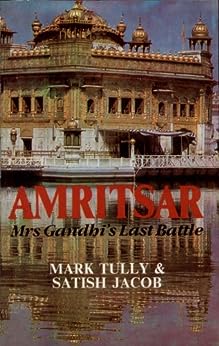 On 5th June 1984, the Indian army began its attack on the complex at Amritsar which house the two most sacred shrines Generals who had pledge to minimum force, and on no account to violate the shrines, were not prepared for the fierce and adept resistance they encountered. Having suffered severe casualties, the infantry were driven back, and as a last resorts -with approval from Delhi-tanks were ordered in. The Akal Takht was virtually reduced to rubble. Its is doubtful if Mrs Gandhi weould have initiated Operation Blue Star had she known how bloody and devastating would be the consequences of that 24- hour conflict.

Sahildeep Singh
4.0 out of 5 stars The apt title should be "Mrs Gandhi's LAST MISTAKE".
20 August 2018
Format: PaperbackVerified Purchase
I can't say more! The investigations published in the book are thought provoking, however I still believe the PM at that time was a celebrated personality and seen as mother of India, it was of the times when people can be fooled easily by obsequious persons day in and out. It comes naturally that it was a staged act by then PM and the people around him for the hunger of "Kursi" in Punjab. The author has failed to depict Jarnail Singh the way he was as known in Punjab"As a Warrior not a Victim", he was a man made by dirty Indian politics. The book do reveals spine chilling killings and Riots that have had happened in Punjab before Bhindrawale's death, but failed to show the atrocities committed by the joint forces in other parts of the Punjab. The investigations carried by the authors are because they were always surrounded by the police protection and by times hear the stories from those officials about happenings in other parts of Punjab. The title is not apt "LAST BATTLE" as it should be "LAST MISTAKE".

Summed up: This book is an interesting and intriguing take on what conspired in Punjab in 1980's that changed Punjab forever. I will strongly recommend this book to the Punjabis of my generation in particular to understand where all the parties falter and how Punjab found itself caught in the situation that left permanent scars in its illustrious history.

Sahil
5.0 out of 5 stars Well covered account of events leading to operarion bluestar & Mrs. Gandhi's assasination.
5 February 2019
Format: PaperbackVerified Purchase
This book gives detailed account of how events uncovered that lead to opration bluestar.Authors gave first hand account of some events & eye witnesses of the action on ground.They met Bhindrewala and others & took their interviews.Great book for those interested in historical events of operation bluestar & Mrs. Gandhis's assasination.
Read more

Dev
5.0 out of 5 stars Read this book to better understand the reality and not what TV debates try to feed us
17 June 2018
Format: Kindle EditionVerified Purchase
I decided to read this book after watching a documentary on bluestar and interview of satish jacob...in just 5 minutes of watching the documentary i ordered this book on amazon as i was genuinely curious to know what transpired in punjab and what led to this once in a lifetime event for our country...fantastic and unbiased work by mark tully and satish jacob...i hav so muh respect for diversity of our country that despite these momentarily set backs that were essentially bred and misused by politicians nd relidious fundamentalists, our nation stands strong. I would strongly recommend every one to read this book nd get a better understanding of events that led to rise of jarnail singh bhindrawale's ideology, khalistan movement which eventually led to operation bluestar followed by assassintion of indira gandhi..a sad state of affairs.
Read more
11 people found this helpful
Helpful
Comment Report abuse

Amazon Customer
4.0 out of 5 stars Investigative journalism at its best..
10 August 2017
Format: PaperbackVerified Purchase
I have read two books on 1984. Mark Tully and Gen. Brar have both done a good job. Mark Tully has tried to be as neutral as possible to portray the happenings of the terrorism era. Gen. Brar is honest about his approach, but you can feel he is hiding a few things and sometimes Brar is just writing a script. Overall both the books corroborate at various points and vary a few times.
Mark Tully's book gives a holistic picture and shows the politics and other factors that led to the attack on Shri Harmandir Sahib and even thereafter. A good read to understand the events of 1984.

Ashok Krishna
5.0 out of 5 stars Noteworthy Account of a Gory Chapter in Indian History
12 August 2019
Format: PaperbackVerified Purchase
1984 is one of those years in Indian history that reek of blood. The rampant killings by the secessionist terrorists, the Indian army’s entry into the holiest of places for the Sikhs – the Golden Temple itself - to capture those terrorists, subsequent assassination of Indira Gandhi to avenge that ‘insult’, and the resultant pogroms that mercilessly butchered innocent Sikhs in and around Delhi – if all these didn’t shock the Indians enough, the year wrapped up with the Bhopal gas tragedy, which wiped out more than 2000 people overnight.

I am always fascinated by history, especially Indian history. But the problem with history is that you must view it through various perspectives in order to arrive at the real, clear picture. Identifying the correct, well-informed and unbiased sources of history is a big challenge, especially in an age where fake news and misinformation campaigns have really become a threat to the very fabric of human societies. This book by Mark Tully stands out for the very reason that it tries to bring out the facts of that time without being biased to any side. It places the blame on the culprits, gives credit where it is due and states the facts without giving us any hints to judge on a particular way.

Politicians across the globe have this bad habit of creating demons to do their sayings, but such demons have inevitably ended up haunting their own masters. The world recently, and painfully, learnt this lesson for the Nth time when Osama bin Laden, CIA’s poster boy in a cause against the Russians, perpetrated the worst terror attack on the American soil. Two decades before that, India also had such a radical, fundamentalist preacher whom the Congress politicians groomed for their narrow-minded political gains. Sant Jarnail Singh Bhindranwale was a preacher with radical notions but living in oblivion. Sanjay and his coterie brought him to the limelight in order to weaken their opposition in Punjab, the Akali Dal. But soon the sant, meaning ‘saint’, accumulated a lot of followers, grew more radical and became quite a brutal force to reckon with.

With support pouring in for him in all forms, Bhindranwale started running a parallel government, terrorizing not just the common people of Punjab but the very unity of this country. The spinelessness of the government led things to the breaking point, allowing the Sant to not just occupy the holy shrine of the Sikhs but to turn it into a fortress, amassing weapons and supplies to challenge the very might of the Indian army. The rest, as they say, is well-known history.

When I searched the web for a book on Operation Blue Star, this was one of those few that topped the list of reliable accounts. Having read this book, I could understand why. From briefing us about the early history of Punjab to describing those events that led to the crescendo that shook Delhi and caused deep divides in Indian society, it is all in here. Written in simple, flowing style, without being prejudiced against any of the parties involved in the conflict, this is a must-read for any lover of Indian history!

Go to Amazon.com to see all 28 reviews 4.1 out of 5 stars
click to open popover
Unlimited FREE fast delivery, video streaming & more
Prime members enjoy unlimited free, fast delivery on eligible items, video streaming, ad-free music, exclusive access to deals & more.
> Get started
Back to top
Get to Know Us
Connect with Us
Make Money with Us
Let Us Help You
EnglishChoose a language for shopping.
© 1996-2020, Amazon.com, Inc. or its affiliates