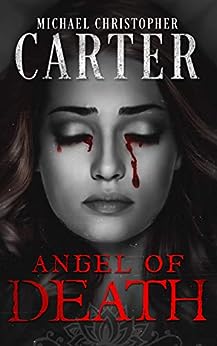 by Michael Christopher Carter (Author) Format: Kindle Edition
Part of: Nightmare Tales from Wales (2 books)
See all formats and editions
Sorry, there was a problem loading this page. Try again.

If she does, someone will die...

"I had to stay up all night to finish this! The ending was awesome"

Terrified of what her dreams will create, photography student, Becca is on the edge.

Following a nightmare of her gran dying, Becca is distraught when she wakes to discover it's true

Then another deadly dream precedes another death, then another, and another. It seems every time she closes her eyes someone dies.

Afraid she'll lose everyone she loves, Becca frantically tries to control her pestilent powers, but attempting to curb them only serves to make them even more dangerous.

Convinced her curse comes from her Indian heritage and her link to the Goddess of Death, 'Kali,' she fears her only hope of saving those she cares about is to make the ultimate sacrifice... And turn her deadly dreams on herself

Someone has to save her from a living nightmare before it's too late...

"As always, Carter gives us a brilliant psychological thriller with a paranormal twist..."

"Absolutely brilliant edge of your seat read throughout..."

"The ending was superb!"

"Paranormal suspense at its best..."

Featuring his renowned depth of character, and twists and turns at the familiar frenetic pace, Angel of Death is a novel that will have the reader on the edge of their seat, and leave them breathless.

Be warned. Once you read one, you'll want to read them all

The beautiful Pembrokeshire Coast National Park provides the inspiration for Michael's novels, giving a real sense of life in South Wales. A former top performing direct sales consultant from the leafy suburbs of England, Michael was brought up a Catholic with a burgeoning interest in alternative, New Age spirituality leading him to attain Reiki Master status in 1999.

It's from this unique perspective that he now indulges his one true passion of writing, producing paranormal novels which delight the seeker whilst paying homage to the skeptic. Described as 'Paranormal tales of the unexpected'; they won't be like anything you've read before.

4.7 out of 5 stars
4.7 out of 5
9 global ratings
How are ratings calculated?
To calculate the overall star rating and percentage breakdown by star, we don’t use a simple average. Instead, our system considers things like how recent a review is and if the reviewer bought the item on Amazon. It also analyses reviews to verify trustworthiness.

GrumpiFrog
5.0 out of 5 stars Don't dream of me
Reviewed in the United Kingdom 🇬🇧 on 14 September 2019
Verified Purchase
This book is an excellent read. It keeps you guessing.... Is she mad? Is she bad? Is any of it real? A slight touch of The Medusa Touch, but so much more.
The ending is superb!
Read more
Report abuse