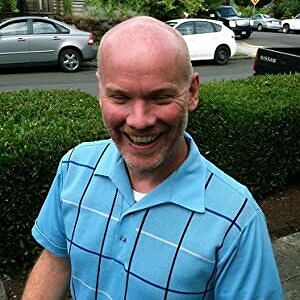 Cashback (2): Get ₹200 cashback on purchase of books, toys, video games, software, grooming or healthcare devices worth ₹2,000 or more only through prepaid payment method. See All
Bank Offer (10): 10% Instant Discount up to INR 1500 on Citibank Credit Card Transactions. Minimum purchase of INR 5000 See All
No Cost EMI: Avail No Cost EMI on select cards for orders above ₹3000 Details
Partner Offers: Get GST invoice and save up to 28% on business purchases. Sign up for free Details
See 2 more
Pay on Delivery
10 Days Replacement Only
Amazon Delivered
No-Contact Delivery
What is Pay on Delivery (Cash/Card)?
Pay on Delivery (Cash/Card) payment method includes Cash on Delivery (COD) as well as Debit card / Credit card / Net banking payments at your doorstep.
Amazon Delivered
Amazon directly manages delivery for this product. Order delivery tracking to your doorstep is available.
No-Contact Delivery

Paul Tobin is a New York Times bestselling author. His writing includes Bandette; Colder; The Genius Factor series; as well as many other comic books and works of fiction.

Bandette, drawn by Colleen Coover, was awarded the Eisner Award for Best Digital Series in 2013 and 2016; it was a finalist for the Oregon Book Award for Graphic Literature in 2016. Paul’s graphic novel I Was the Cat, created with artist Benjamin Dewey, was nominated for an Eisner in 2015. Colder, the horror comic he created with artist Juan Ferreyra, was also nominated that same year. Paul's comic book adaptations of other media include Plants Vs. Zombies, Angry Birds Comics, and The Witcher.
Tell the Publisher!
I'd like to read this book on Kindle

4.7 out of 5 stars
4.7 out of 5
45 global ratings
How are ratings calculated?
To calculate the overall star rating and percentage breakdown by star, we don’t use a simple average. Instead, our system considers things like how recent a review is and if the reviewer bought the item on Amazon. It also analyses reviews to verify trustworthiness.
Top reviews

Sleepymoo
5.0 out of 5 stars 5 year old loves it
Reviewed in the United Kingdom on 29 July 2015
Verified Purchase
My five your old loves Angry Birds & as he has just finished Reception Class I wanted to get something to keep his reading up over summer. This comic has done the trick he is a huge AB fan. A big thumbs up from him.
Read more
Report abuse

PurpleBrina
5.0 out of 5 stars great reading fun
Reviewed in the United States on 25 May 2016
Verified Purchase
my son loves these comic books.
Read more
12 people found this helpful
Report abuse

K. N.
5.0 out of 5 stars Five Stars
Reviewed in the United States on 23 April 2016
Verified Purchase
thanks
Read more
6 people found this helpful
Report abuse
See all reviews
Back to top
Get to Know Us
Connect with Us
Make Money with Us
Let Us Help You
EnglishChoose a language for shopping.
© 1996-2021, Amazon.com, Inc. or its affiliates