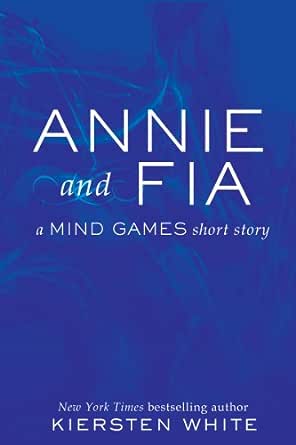 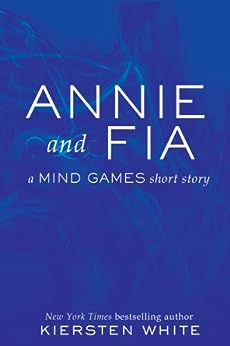 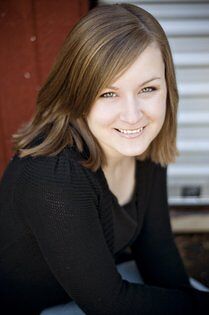 3.7 out of 5 stars
3.7 out of 5
17 global ratings
How are ratings calculated?
To calculate the overall star rating and percentage breakdown by star, we don’t use a simple average. Instead, our system considers things like how recent a review is and if the reviewer bought the item on Amazon. It also analyses reviews to verify trustworthiness.

Making Good Stories
3.0 out of 5 stars Mental Mettle
Reviewed in the United States on 10 August 2019
Verified Purchase
The bond between sisters is often strong, but in Kiersten White's Annie and Fia: A Mind Games Short Story one sister learns just how far she'll go to protect the other.

Having been blind since she was four years old, Annie was understandably startled when she suddenly was able to see for a brief moment. But what she saw was unsettling and would change the lives of her and her younger sister Fia forever. In the aftermath of their parents' untimely deaths, Fia has helped to look after Annie and help her through daily life, forging a bond between them that is rather strong. When on school skiing trip, Fia finds out what her limits are in protecting her sister when she's provided a strange task to accomplish from Annie's appointed caretaker, setting the basis for future tasks that she won't easily be able to turn back from.

As a prequel to Mind Games, which I haven't read, this story entices readers with just enough intriguing information to read on to the larger narrative to find out more. There were interesting mental abilities mentioned for various characters, which sets each character up to have their particular strengths and affiliated flaws associated with those abilities. With brief chapters within this short story, the narrative jumps randomly between different periods of time before and after Keane, which, while helping to fill out a better understanding of how the sisters came to be where they are, did have a rather disjointed feeling to it.
Read more
Report abuse

Kristi Hulsey
5.0 out of 5 stars great start to the series
Reviewed in the United States on 3 January 2015
Verified Purchase
This little novella is suppose to get me into reading mind games. The first book of the series. Which it did. My favorite character is Annie. In just 30 pages I kinda enjoyed it. Annie is blind and has telepathy. She can see the future. She saw how her parents died. I think its so cool her being blind and then seeing the future. How can a blind person see? But she gets these vivid visions. Where she sees color and pictures. I love it. Sofia is the one that takes care of her. And is fighting for her own personal life. Like really every teenager. Thats what I got out of these few pages. I cant wait to read the first book now and see what I think about it. Love Annie though.
Read more
Report abuse

Shay
3.0 out of 5 stars Jumpy
Reviewed in the United States on 3 February 2019
Verified Purchase
Although this story provides additional details to fluff out the "before Keane" life of Fia and Annie I felt like it wasn't as crisply organized as it should have been. It's still a good read it you are curious.
Read more
Report abuse

Serenity
5.0 out of 5 stars Annie and Fia: A Mind Games Short Story
Reviewed in the United States on 9 January 2014
Verified Purchase
Such a fun story to read. Loved it, since I read Mind Games and this made me love these girls so much more. Now I am just waiting for the next book Perfect Lies.

This is a great read for anyone. If you haven't read any of Kiersten's books yet, then read this and you will dive into her books!
Read more
One person found this helpful
Report abuse

Readingfreak
5.0 out of 5 stars Amazing short story to go along with an amazing book
Reviewed in the United States on 25 December 2013
Verified Purchase
This short story doesn't disappoint, as none of Kiersten White's books ever do! It gives great insight into the reasons behind the actions in Mind Games, and is well written and engaging. You get more from Annie, which is nice. It serves as a nice prequel, and leaves you wanting more, waiting for the next book!
Read more
One person found this helpful
Report abuse
See all reviews
click to open popover
Back to top
Get to Know Us
Connect with Us
Make Money with Us
Let Us Help You
EnglishChoose a language for shopping.
© 1996-2021, Amazon.com, Inc. or its affiliates