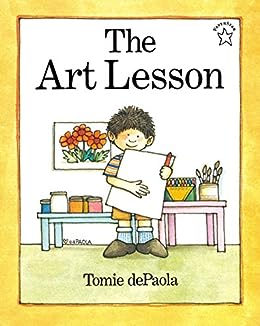 Tomie dePaola was born in Meriden, Connecticut, in 1934 to a family of Irish and Italian background. By the time he could hold a pencil, he knew what his life's work would be. His determination to create books for children led to a BFA from Pratt Institute in Brooklyn, New York, and an MFA from the California College of Arts & Crafts in Oakland, California.

He names Fra Angelico and Giotto, Georges Rouault, and Ben Shahn as major influences on his work, but he soon found his own unique style. His particular way with color, line, detail, and design have earned him many of the most prestigious awards in his field, among them a Caldecott Honor Award for Strega Nona, the Smithsonian Medal from the Smithsonian Institution, the Kerlan Award from the University of Minnesota for his "singular attainment in children's literature," the Catholic Library Association's Regina Medal for his "continued distinguished contribution," and the University of Southern Mississippi Medallion. He was also the 1990 United States nominee for the Hans Christian Andersen Medal for illustration.

Tomie dePaola has received virtually every significant recognition forhis books in the children's book world, including:

"The perennial conflict between Individual and Authority, or between Artist and Society, lies beneath this anecdote, and it's gratifying to see the small non-conformist accommodated. Everyone can enjoy dePaola's gentle autobiographical evocation of a loving family and a happy obsession". — School Library Journal

This is a charming exercise in autobiography (one of several) by the great author-illustrator Tomie dePaola. "Tommy" is consumed with a passion for drawing. Although encouraged by his family, who treat his pictures with respect and decorate their houses and workplaces with them, he encounters misunderstanding and frustration at school. Finally, an art teacher gives him a chance to do his own thing. The Art Lesson is filled with many full-page illustrations in dePaola's inimitably warm, soothing style. It's also packed with the right lessons on individuality and perseverance, especially for children who are already showing a single-minded interest or special talents that put them ahead of their peers. (Ages 4 to 8) --Richard Farr --This text refers to the hardcover edition.
Read more

4.8 out of 5 stars
4.8 out of 5
327 global ratings
How are ratings calculated?
To calculate the overall star rating and percentage breakdown by star, we don’t use a simple average. Instead, our system considers things like how recent a review is and if the reviewer bought the item on Amazon. It also analyses reviews to verify trustworthiness.

Brenda Atkinson
4.0 out of 5 stars ART Lesson for me!
Reviewed in the United Kingdom on 18 January 2013
Verified Purchase
Inspiration for teaching Art on Supply for two and a half weeks in a school for children with learning difficulties, and inspired the children to express themselves in their own way when encountering difficulty with set school and home work
Read more
Report abuse

MJ
5.0 out of 5 stars That reminded me of me
Reviewed in Canada on 1 February 2021
Verified Purchase
After I got the purchase of "The Baby Sister" I thought I check out the other story by Tommie DePuala; he made a guest appearance on Barney and explained to the kids about his book about "The Art Lesson". Not only it's a great book, but it also explains the life from his childhood, which was really shocking (not in a bad way). I too wanted to be an artist, so that gave me back a little inspiration that I have lost a long time ago.
Read more
Report abuse

AZN8TV
5.0 out of 5 stars Great book for kids and adults
Reviewed in the United States on 25 June 2019
Verified Purchase
I bought this for the second grader I was mentoring last year. He was in need of confidence.

At the beginning of the book, I wasn't sure it was good for my kid, as he had some serious behavior issues. By the time we got to the end of the book, it was clear that the message was to believe in oneself and never give up your dreams.

I noticed it was also on the 2nd to 3rd grade summer reading list.


Read more
5 people found this helpful
Report abuse
See all reviews
Back to top
Get to Know Us
Connect with Us
Make Money with Us
Let Us Help You
EnglishChoose a language for shopping.
© 1996-2021, Amazon.com, Inc. or its affiliates