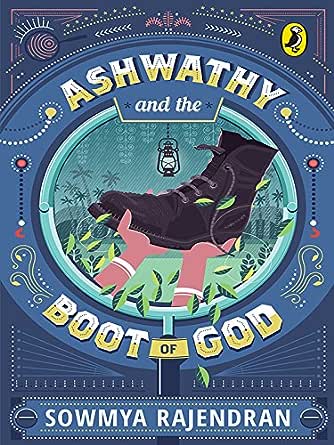 Subtotal ₹
Cart
View your cart
To add this eBook, remove any 1 eBook from your cart or buy the 25 eBooks present in the eBook cart
Review items in your cart
There was a problem adding this eBook to the cart
Kindle Edition
₹ 208.95 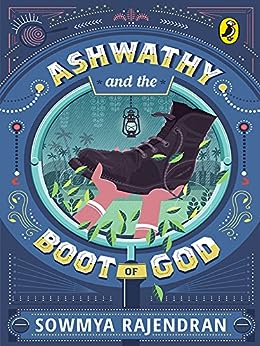 Ashwathy and the Boot of God Kindle Edition

Sowmya Rajendran has written books for children across age groups, from picture books for the tiny ones to young adult fiction. Her books are on the CBSE's recommended reading list for schools. She is a columnist with the student edition of The New Indian Express and Sify Movies. Sowmya's titles with Penguin include the graphic novel Nirmala & Normala and The Incredible History of India's Geography, a children's adaptation of Sanjeev Sanyal's Land of the Seven Rivers. She lives in Pune --This text refers to an alternate kindle_edition edition.

The Book Chief
5.0 out of 5 stars Someone please tell Sowmya Rajendran that I love her!
Reviewed in India on 14 November 2016
Verified Purchase
Another great book by the amazing Sowmya Rajendran. I hereby officially declare that I am in love with her!

Ashwathy is a 14-year old atheist living in a small town called Kuttipuram in Kerala. She is bright, curious, spunky and determined. Her simple and supportive Achan (father) is immensely proud of her and keeps her supplied with English movies (her favourite crime thrillers) so that she becomes fluent in English. He is determined that his smart daughter will be the first postgraduate in the family. Ashwathy loves her Achan and is determined to live up to his dreams for her.

So its no wonder that God (who lives in a photo inside an old discarded boot) chooses her to solve a recent case of murder that has been incorrectly classified as 'suicide' by the local police. And here we begin to see Sowmya Rajendra's unusual perspective. For God is shown as a woman, who goes on dates, likes to drink toddy and laughs at offerings like a hundred and eight coconuts ("that would make a lot of chutney, wouldn't it?") She also corrects Ashwathy's friends' wannabe urban slang (" 'Amaze' is the new 'awesome' ")

Ashwathy recruits her best friends Geeta and Malavika, and her pedantic plump classmate Radhakrishnan (RK) (who has a crush on her) to help her solve the case. God helps too, but not as the omniscient being we imagine her to be...she uses her powers to disguise the young detectives on their investigations or to help them find clues, but she doesn't outright solve the case. Apparently, God was on vacation "to visit my cousin in another universe" so she missed what really happened the night of the murder. Also she cant just "read everybody's minds to know who committed the murder" as Ashwathy suggests, because she doesn't believe in interfering with human lives.

Led by the proactive and brave Ashwathy, the four teens snoop around Kuttipuram, interrogating suspects and cross-checking facts till they crack the case. They also manage to get a written confession, being disguised as police officers(courtesy God, of course) There is also a small sub-plot featuring the sleazeball Maths teacher in Ashwathy's school, Gopalan Sir, who has tried to molest Ashwathy in the past and whom Ashwathy (in her cop avataar) scares to death and cures of his leering.

I loved Ashwathy- her independence, her confidence and her go getter attitude. Her friends are perfectly etched too- from the trembly yet loyal RK to the quick-thinking Malavika and well-read Geeta. But best of all is God, who, with her wisdom and witticisms is one amazing person whom even an atheist wouldn't mind befriending.