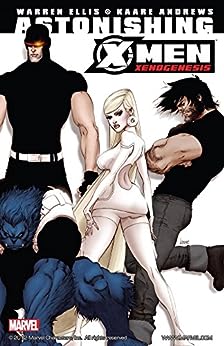 by Warren Ellis (Author), Kaare Andrews (Illustrator, Artist) Format: Kindle Edition
See all formats and editions
Sorry, there was a problem loading this page. Try again.
Collects Astonishing X-Men: Xenogenesis #1-5. Something's happening in the tiny East African city of Mbangwi. A newborn sprouts metal electrodes and explodes, taking out an entire hospital. Is this the first wave of mutant rebirth that the X-Men have been praying for ? or something very, very different? Something sinister?

Warren Ellis is an English author of comics, novels, and television, who is well-known for sociocultural commentary, both through his online presence and through his writing, which covers transhumanist themes. He is a resident of Southend-on-Sea, England. Kaare Andrews is a comic book writer and artist and filmmaker known for his cover work on Incredible Hulk and Canada's first national recognized award, "The Shuster", for his work on Spider-Man: Doctor Octopus. --This text refers to an alternate kindle_edition edition.

4.0 out of 5 stars
4 out of 5
23 global ratings
How are ratings calculated?
To calculate the overall star rating and percentage breakdown by star, we don’t use a simple average. Instead, our system considers things like how recent a review is and if the reviewer bought the item on Amazon. It also analyses reviews to verify trustworthiness.
Top reviews

L. Holdsworth
3.0 out of 5 stars Good story, Horrible Characterisation
Reviewed in the United Kingdom on 19 September 2012
Verified Purchase
I absolutely devoured the first few books in this series. The Whedon-Cassaday partnership really bore fruit with great stories, accessible art and cracking characters. Of course, Whedon nrought with him his usual sensitivity to female characters, making them tough, funny and sexy all at teh same time.

Well, this book completely jettisons that. This is particular obvious in the case of Emma Frost who seems to spend teh entire story striking physically impossible poses with her biologically impossible breasts. There is even a frame that seemingly has her thrusting them in Wolverine's face whilst he looks on appreciatively. Meanwhile Armor is reduced to a bit-part player and Storm hangs about taking naked video-phone calls from her husband before flirting with Cyclops.

What a shame that a really good story has been ruined with old-fashioned comic book sexism. I don't think Joss Whedon would approve.
Read more
3 people found this helpful
Report abuse

Matthew W. Manzo
2.0 out of 5 stars If you skip it, you won't miss much
Reviewed in the United States on 19 February 2014
Verified Purchase
I am an avid avid X-men fan, so to say I don't like book of the characters I love says A LOT.

So the storyline of this book has to do with alternate universe interacting with the X-men's in someway, and is resolved in such a way that it's almost like it didn't happen...so not really part of X-men cannon.

As for the artwork, some of it is cool and most of it is smothered by unneeded over-sexuallized panels of Emma Frost's Chest.
Now mind you she is in many X-books and ussually wearing, or not wearing, something risque, but this is a whole new level that seems to just overtake the entire book.

Anyhow I rarely sell the X-books I purchase but this one was gone as soon as I read it.

If you are going to read this book you will need to read Astonishing X-men: Ghost Boxes and Uncanny X-men: New Age Vol. 1
to grasp all the things that are being discussed with in it.
Read more
One person found this helpful
Report abuse

Greg S.
5.0 out of 5 stars Great story, amazing art
Reviewed in the United States on 10 April 2011
Verified Purchase
Astonishing X-Men: Xenogenesis collects issues #1-5 of Astonishing X-Men: Xenogenesis, as well as the Director's Cut of issue #1, all originally published between 2010 and 2011. The graphic novel is excellently produced with medium-gloss paper, finished boards in black, and a sturdy binding. There are no extras unique to this edition, but the graphic novel does reproduce those extras originally contained in the Director's Cut: the pre-colored art pages for all of issue #1, some cover sketches, and Warren Ellis's original script for issue #1.

Like most of Ellis's work, Xenogenesis is dark, wildly imaginative, and tightly plotted. For this self-contained story about the chaos caused by the birth of mutant babies in a small African town, Ellis dusts off an old--and to most readers, probably unfamiliar--set of concepts from the UK's old Captain Britain series (collected in  Captain Britain Omnibus ). The result is exciting, politically sophisticated, and a little weird--everything an X-Men comic book should be. As for the art, Kaare Andrew's handling of the X-Men, which here include Cyclops, Emma Frost, Wolverine, Beast, Armor, and Storm, is in a class of its own. His characters are at once dynamic, sexy, and slightly ridiculous (especially Emma Frost, whose breasts take on a life of their own).

If you're a fan of Ellis, the X-Men, or Alan Davis and Alan Moore's Captain Britain, you will almost certainly love this book. More casual readers looking for a good, self-contained read will also enjoy this.
Read more
8 people found this helpful
Report abuse

Sammy
3.0 out of 5 stars A Less than Stellar End to Ellis's Lackluster Run
Reviewed in the United States on 5 March 2012
Verified Purchase
I would like to first point out that I would have given this book four or even five stars, but I have been waiting for a long time for this story to come out in paperback form. The end product, while actually pretty good, is not acceptable for a book that continuously has as many delays as this one does. The good? The artwork is done by someone extremely competent, Kaare Andrews. Also, the antagonist of this book is pretty cool, and I actually hope to see him in future issues. The bad? Where do I even freaking begin? Beast says there are no such things as mutant births, which heavily contradicts the events of Messiah Complex, since Hope Summers was identified as a mutant soon after she was born. Too much of Emma Frost's cleavage is revealed by her outfit, and the outfit itself makes them look incredibly fake (which they are) and unintentionally hilarious. Also, Ellis never explained what the MSF (Mutantes Sans Frontieres) actually is. He just sort of dodges around and tries to make the book look more interesting than it actually is.
Read more
One person found this helpful
Report abuse
See all reviews
Back to top
Get to Know Us
Connect with Us
Make Money with Us
Let Us Help You
EnglishChoose a language for shopping.
© 1996-2021, Amazon.com, Inc. or its affiliates