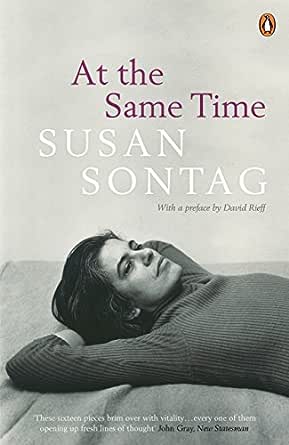 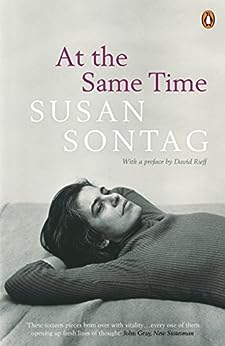 At the Same Time Kindle Edition

I know of no other intellectual who is so clear-minded, with a capacity to link, to connect, to relate (Carlos Fuentes The Times)

One of the most brilliant minds and sharpest pairs of eyes of her generation (Observer) --This text refers to the hardcover edition.

Susan Sontag was born in Manhattan in 1933 and studied at the universities of Chicago, Harvard and Oxford. Her non-fiction works include Against Interpretation, On Photography, Illness as Metaphor, AIDS and its Metaphors and Regarding the Pain of Others. She is also the author of four novels, a collection of stories and several plays. Her books are translated into thirty-two languages. In 2001 she was awarded the Jerusalem Prize for the body of her work, and in 2003 she received the Prince of Asturias Prize for Literature and the Peace Prize of the German Book Trade. She died in December 2004. --This text refers to the hardcover edition.

The world lost a brilliant, passionate, and ethical thinker and writer when Susan Sontag died in December 2004. In his moving foreword to this collection of resonant essays and speeches, Sontag's son, David Rieff, writes that his mother "was interested in everything. Indeed, if I had only one word with which to evoke her, it would be avidity." But for all her arresting insights into photography and other arts, literature was Sontag's true love, and nowhere else has she so directly addressed what literature accomplishes. Sontag was working on this book at the end of her life, and it is a generously personal volume addressing her greatest ardors and gravest concerns. Here is Sontag on beauty, Russian literature, and the art of literary translation. Here, too, are Sontag's clarion writings on Israel, 9/11, and Abu Ghraib. Although Sontag was happiest writing fiction, she never failed to celebrate the work of others or protest injustice and brutality, and in this she was both artist and hero. More posthumous works are promised. Donna Seaman
Copyright © American Library Association. All rights reserved --This text refers to the hardcover edition.
Read more

4.6 out of 5 stars
4.6 out of 5
24 global ratings
How are ratings calculated?
To calculate the overall star rating and percentage breakdown by star, we don’t use a simple average. Instead, our system considers things like how recent a review is and if the reviewer bought the item on Amazon. It also analyses reviews to verify trustworthiness.

Amazon Customer
5.0 out of 5 stars Continuing Inspiration
Reviewed in the United Kingdom on 22 May 2015
Verified Purchase
A wonderful, continually inspriring book. A great source for anyone interested or involved in writing and reading.
Read more
One person found this helpful
Report abuse

Charlus
5.0 out of 5 stars A Unique Voice
Reviewed in the United States on 16 March 2007
Verified Purchase
Reading this collection of essays is an exhilarating experience for anyone who cares about the ethical value of literature, as Sontag herself would say, the "seriousness" of literature. For Sontag was nothing if not "serious". This is not to say humorless, but always fully engaged, grappling with issues that she would return to time and again if her views changed or to clarify a point.

These issues, exemplified by this sterling collection of essays, range from the political to the moral to the literary (she would probably say the latter encompasses the former two). While her outspokeness frequently won her enemies, and her bluntness can be seen at times as insensitive, she was always looking inward to create a public person that she could admire, a strenuous egotism.

Readers of this volume can find her championing writers she feels have been neglected, criticizing the United States foreign policies and most notoriously, evaluating the attacks of 9/11 in yet further clarifications of her opinions.

The loss of this woman is incalculable; even when one disagrees with her(and at some points I am sure you will) you will never fail to find her challenging you to define your own point of view. Her aphorisms expand in widening concentric circles of thought, broadening your vistas with clarity and compassion.

GoldLeaf
5.0 out of 5 stars Essays of unique intellect and insight
Reviewed in the United States on 8 March 2014
Verified Purchase
Susan Sontag has the ability to guide us with her intellect and also touch us with her heart - it's a rare gift - but she talks to us intimately and educatively and her words are as resonant now as they were then - we miss your thought leadership Susan Sontag
Read more
Report abuse