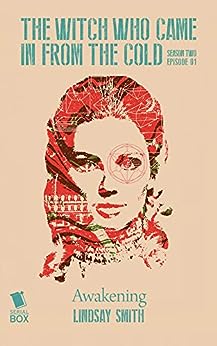 This is the 1st episode in the second season of The Witch Who Came In From The Cold, a 13-episode serial from Serial Box Publishing. This episode written by Lindsay Smith.

The spies and sorcerers of Prague face hard questions and increased oversight in the wake of last season’s explosive events. On the Vltava, a Flame op goes up in literal flames when a mysterious interloper joins the fray.

Welcome to Prague, 1970: the epicenter in a Cold War of spies and sorcerers. The streets are a deadly chessboard on which the CIA and KGB make their moves, little dreaming that a deeper game is being played between the Consortium of Ice and the Acolytes of Flame, ancient factions of sorcery.


Praise for The Witch Who Came in from the Cold:


"Those who like to mix magic, spycraft, and secret history should enjoy this—it may please fans of Stross’s Laundry series." —Locus Magazine

"Full of fast-paced, high-intensity action paired with magic at a level that has not been seen until now, with a cliff-hanger that lets readers know that the game is not over and has only just begun." —The San Francisco Book Review

"The Witch Who Came in from the Cold is a chilly evocation of a different kind of Cold War." —Charles Stross, author of the Laundry Files series

“Take a double shot of Le Carré, a dash of Deighton, a twist of Quiller, a splash of Al Stewart’s The Year of the Cat, throw in a jigger full of elemental magic, mix well … and voilà! The Witch Who Came In From The Cold.” —Victor Milán, author of The Dinosaur Lords

"The occult love child of John le Carre and The Sandbaggers." —Marie Brennan, author of A Natural History of Dragons

"As soon as I saw that, I was instantly hooked, and the pilot jacked the intrigue to the max. Two female Soviet spy witches, an American spy with something weird drilling magical holes in his head, and a world of secrets within secrets in a locale where old-world myth and the Cold War face off, pedal to the metal . . . it’s awesome. Or as we said in 1970, Far out. " —Sherwood Smith, author of Crown Duel

"The installments are easy to read one at a time, but the tangles of alliances, secrets, and shocking double-crosses will have readers up all night mumbling, “Just one more.” —Publishers Weekly, starred review