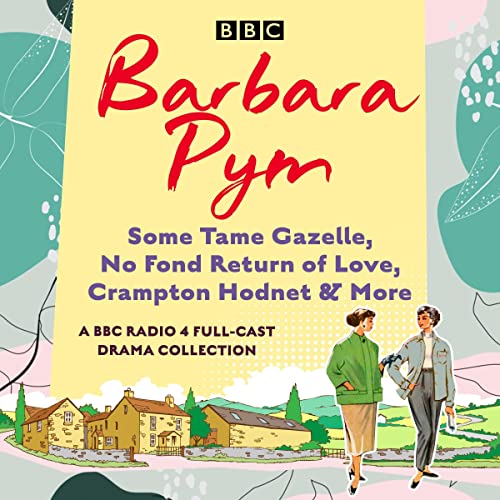 Dramatisations and a reading of selected novels by Barbara Pym - plus bonus material.

Barbara Pym is one of the 20th-century's wittiest, and most underrated, novelists. Her perceptive comedies of manners, centred around the domestic lives and loves of unassuming middle-class Englishwomen, won her many devoted readers and saw her hailed as a modern-day Jane Austen. Yet she spent 15 years out of print in the 1960s and '70s, until Philip Larkin championed her work in the Times Literary Supplement. Her seventh novel was subsequently shortlisted for the Booker Prize, and writers from Jilly Cooper to Alexander McCall Smith continue to laud her talent today.

Included in this collection are the BBC Radio dramatisations of some of her most beloved books, including her debut Some Tame Gazelle; her second novel Crampton Hodnet, published posthumously in 1985; and its sequel Jane and Prudence. Alongside them are her fifth and sixth novels, A Glass of Blessings and No Fond Return of Love; and a comic spy thriller, So Very Secret. Adapted by actress and writer Elizabeth Proud, they feature stellar casts including Miriam Margolyes, Hannah Gordon, Samantha Bond, Rebecca Front, Joanna David, Penny Downie and Amanda Root.

Her best-known novel, Excellent Women, about a clergyman's daughter whose life is disturbed by anthropologists and a handsome naval officer, is read by One Foot in the Grave star Annette Crosbie. It is followed by a bonus biographical drama, The Resurrection of Miss Pym, starring Penelope Wilton and Bill Wallis and telling the story of Barbara Pym's warm friendship with Philip Larkin, her years in the publishing wilderness and her eventual triumphant rediscovery. And in the fascinating radio talk Finding a Voice, we hear from the author in her own words as she analyses her inspiration, influences, literary style and why she kept on writing 'even in the face of discouragement'.

With thanks to the British Library for the sourcing of Crampton Hodnet.

A Glass of Blessings

No Fond Return of Love

The Resurrection of Miss Pym