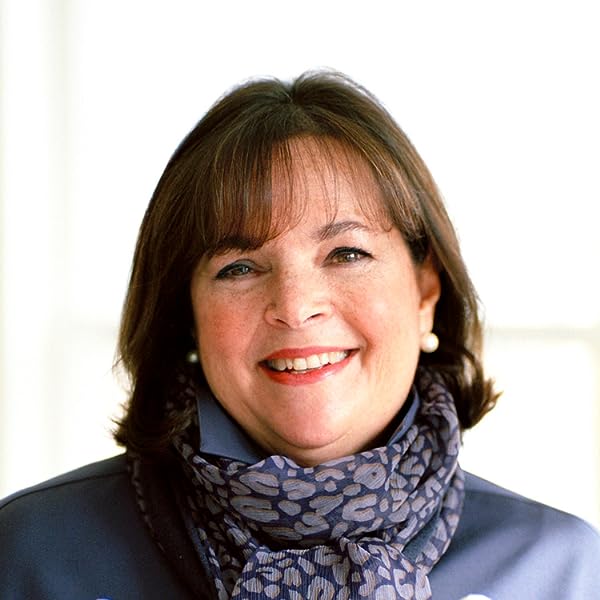 Barefoot Contessa at Home: Everyday Recipes You'll Make Over and Over Again: A Cookbook Hardcover – 24 October 2006

by Ina Garten (Author)
4.7 out of 5 stars 1,791 ratings
See all formats and editions
Sorry, there was a problem loading this page. Try again.
10 Days Replacement Only
Read more Read less
Previous page
Next page

Ina Garten is the author of four previous cookbooks, which have sold more than three million copies: The Barefoot Contessa Cookbook, Barefoot Contessa Parties!, Barefoot Contessa Family Style, and Barefoot in Paris. Ina is also the star of the Food Network Show Barefoot Contessa, and her new line of cake mixes, marinades, and condiments can now be found at specialty food stores across America. She lives in East Hampton, New York, and New York City with her husband, Jeffrey. Visit Ina at www.barefootcontessa.com.


I didn’t always know how to make a home. It took time and lots of experimentation. Over the thirty-eight years we’ve been married, I’ve tried everything—the good, the bad, and the ugly. But I’ve evolved a style that seems to work for me: big sofas for a nap on Sunday afternoon; comfy reading chairs with good light and a view out the window for daydreaming; great CDs piled up by the stereo; and my favorite old videos next to the television. I like knowing that there are twenty new magazines on the coffee table, delicious French teas in the pantry, and expensive bath bubbles next to the tub. A good home should gather you up in its arms like a warm cashmere blanket, soothe your hurt feelings, and prepare you to go back out into that big bad world tomorrow all ready to fight the dragons.

I’m basically a nester. All day long, I feel as though I’m batting back the baseballs that are being hurled at me: decisions to make, places to go, cranky people to deal with…and when I come home, I want my house to feel serene and beautiful, like the way you feel when you get into a bed piled high with down pillows: you’re safe. Jeffrey and I have moved many times in the years we’ve been married and though we’ve always had a house (or at least an apartment), I’ve never been comfortable until I’ve made it a home. When we were first married, Jeffrey was in the Army and we moved to the less-than-cosmopolitan town of Fayetteville, North Carolina, where we rented a little furnished garden apartment. It was probably fairly ordinary, but I thought it was wonderful. The first week, I rolled up my sleeves, cleaned it from top to bottom, made curtains for the windows, painted the bedroom, bought a rug for the living room, and stocked the kitchen. We made friends in the neighborhood, gave dinner parties, and very soon we felt right at home.

After the Army, Jeffrey and I moved to Washington, D.C., where he was in graduate school and I worked for the government. Each time we moved I wanted to do even more to make us feel at home. This time, I rented an unfurnished apartment so I could also choose the furniture. I seem to remember some very 1970s black and white furniture with splashes of purple and yellow. What was I thinking?? But at the time it felt just right. The next time we moved, we bought our first house, which gave me the chance to choose the furniture and decorate the house. This was starting to get really challenging. Unfortunately, I was still learning. The first thing I did in the new house was paper the bedroom with a very pretty blue and white wallpaper printed with Japanese dogwood blossoms. Only when I was finished did I realize that I’d hung the paper completely upside down. I couldn’t afford to redo it, so for years I woke up every morning to upside-down dogwood branches. More important, though, this was the first house in which I got to design my own kitchen from the ground up and it was the place where I really started to cook. Mastering the Art of French Cooking, by Julia Child, Simone Beck, and Louisette Bertholle, was my bible and my friends were my guinea pigs. I started to have parties on a regular basis and began to realize that friends were also an important part of what made a house feel like home to us.

After many years and lots of houses, we moved to the east end of Long Island. I’ll never forget New Year’s Day 1985. For the previous seven years, I’d owned a specialty food store in Westhampton Beach called Barefoot Contessa. Jeffrey and I were driving into East Hampton that day to see the new space that I had rented. As we drove down Montauk Highway on that bright, chilly morning through the double allée of ancient sycamore trees whose branches reach elegantly across the highway, past the picturesque town pond with ducks and swans, around the historic Mulford Farm with its perfectly preserved buildings dating back to the seventeenth century, I remember thinking that I was really, finally, home.

Twenty years later, I look back on that day and smile. When you find a chair that’s comfortable, you just know it. That’s how I feel about the place I live. I can’t imagine being happier anywhere else. Yes, it’s a place where Hollywood stars hang out with New York investment bankers. But that’s not my East Hampton. For me, it’s a place with a deep history and in some ways it’s not all that different from the farming community it was when it was founded in 1640. It’s a place where Jim Pike, who grew up in suburban Westchester County, New York, wanting to be a farmer, came to make his home and started an extraordinary farm in Sagaponack that sells heirloom tomatoes, sweet white corn, and the most delicious raspberries. It’s a place where Sal and Eileen Iacono inherited a farm from their family and, realizing that vegetable farming was too tough a life, instead started raising the best chickens that ever graced a Sunday dinner. It’s a place where fishermen like the Duryea family of Montauk have hauled in seafood and lobsters for three generations. Later, it became home to business people like my dear friend Antonia Bellanca, who came to set up first a flower shop and then a worldwide fragrance business called Antonia’s Flowers. And lots of people who, like my friend Barbara Libath, came here for summers as children and decided to raise their families here year-round. We all came to East Hampton and found ourselves at home.
Start reading Barefoot Contessa at Home on your Kindle in under a minute.

4.7 out of 5 stars
4.7 out of 5
1,791 global ratings
How are ratings calculated?
To calculate the overall star rating and percentage breakdown by star, we don’t use a simple average. Instead, our system considers things like how recent a review is and if the reviewer bought the item on Amazon. It also analyses reviews to verify trustworthiness.
Top reviews

EileenB
5.0 out of 5 stars Clever foolproof recipes
Reviewed in the United Kingdom on 7 August 2021
Verified Purchase
Every now and then I find a set of recipes I can’t wait to try. I’m as enthusiastic to create them as to eat them. Ina Garten’s ‘ Barefoot Contessa at home’ is a book I read at one sitting. Marvellous friendly open style, made me feel I wanted to cook up a storm! Already made Eli’s Salmon, a winner of a dinner with green, green veg and what can I say about the Ginger biscuits? Tasty & moreish. It’s as if Ina Garten is at your elbow encouraging you to play!
Read more
Report abuse

Mrs P Cooper
4.0 out of 5 stars Good to be able to get this book easily.
Reviewed in the United Kingdom on 18 December 2018
Verified Purchase
Good value second hand book. Always enjoy Barefoot Contests on TV cooking..nice to have recipes.
Read more
Report abuse

reviewsbychloe
5.0 out of 5 stars Another Great Book from Ina
Reviewed in the United Kingdom on 11 November 2013
Verified Purchase
This has been bought as a present for someone that watched Barefoot Contessa regularly on the TV, it has some great recipes and its laid out well.
It was a bit of a pantomine with the order as it got lost in the post before turning up the same day as the re-order but praise should be given to Amazon customer services who handled the delivery problems efficiently