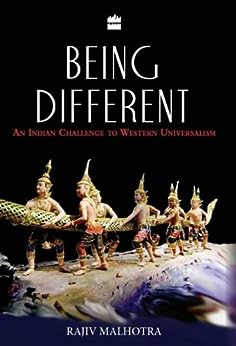 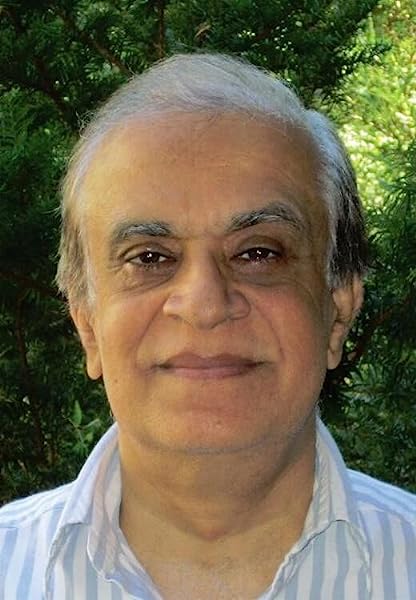 Being Different: An Indian Challenge to Western Universalism Kindle Edition

Rajiv Malhotra s insistence on preserving difference with mutual respect not with mere tolerance is even more pertinent today because the notion of a single universalism is being propounded. There can be no single universalism, even if it assimilates or, in the author s words, digests , elements from other civilizations --Kapila Vatsyayan --This text refers to the paperback edition.

After studying physics and computer science, Rajiv Malhotra worked as a senior executive in the software and telecom industries before becoming a management consultant and then launching his own ventures in twenty countries. He took early retirement in the mid-1990s at the age of forty-four and established Infinity Foundation, a non-profit organization based in Princeton, New Jersey. --This text refers to the paperback edition.

4.7 out of 5 stars
4.7 out of 5
480 global ratings
How are ratings calculated?
To calculate the overall star rating and percentage breakdown by star, we don’t use a simple average. Instead, our system considers things like how recent a review is and if the reviewer bought the item on Amazon. It also analyses reviews to verify trustworthiness.

I also liked the idea of mutual respect. That is we need a culture where all religions accepts other religions are true.

A must read for every debator and understand why we are different, and why difference must exits always.
Read more
67 people found this helpful
Helpful
Report abuse

Thiyagarajan S
5.0 out of 5 stars Do Hindus need a holy book, a messiah and a fixed practice?.... Don't be stupid, just read this book
Reviewed in India on 8 February 2018
Verified Purchase
Do you want to know the fundamental differences between oriental and occidental religions, this is the most authentic book you can get your hands to. The scholarly proficiency of the author is way too high for any of the reader to make comments. The historical and theosophical insights given in this book are of high quality content.
Read more
55 people found this helpful
Helpful
Report abuse

Akshay Malhotra
5.0 out of 5 stars Overcome Inferiority Complex and Slave Mindset
Reviewed in India on 16 August 2016
Verified Purchase
Being Different

Book gives detailed explanation on why things are the way they are in India. Before reading this book I had many questions in Mind such as Why these people are so dedicated to conversion and why do they defame Hinduism and Indian culture so much, and I also understood the basic differences between Dharmic and Adharmic way of lives. All I want to say is I got a clear picture of today's so called intellectual world.
Read more
52 people found this helpful
Helpful
Report abuse

B.N.Gururaj
5.0 out of 5 stars An Eye Opener for Indians about their Culture
Reviewed in India on 12 August 2020
Verified Purchase
"Being Different" is a highly original book. It is not based on ideas developed by others. The writer juxtaposes India's dharmas against Western culture and demonstrates in detail how Western culture, which is based on Christianity (what the writer calls as Judeo-Christian culture), distorts India's culture, deconstructs it and appropriates and digests part by part. The writer refers to different aspects such as Yoga, Ayurveda, Philosophical concepts, Indian Sciences which have been appropriated by the West since mind 17th century.

West claims to be the "universal culture" judges every other non-Western culture by that gold standard and classifies them as backward, who have to be civilized by the West. On the other hand, the writer shows, the pre-modern western culture was totally at logger heads with science, especially the church. Now, the west which includes Church and rest of the western culture tries to reposition itself as "The Remedy" for the rest of the world's ailments.

But, these cultures have given the world only strife and misery in the form of slavery, colonalism, capitalism, communism and the like. On the other hand, the culture of India, which is based on Dharma has never been aggressive in its interactions with the cultures of other countries such as south-eastern countries, central Asia, west and so on.

Due to British colonialism, English education and distorted history taught to us by leftist historians, we Indians are unable to look at ourselves from our own view point. We are also unable to look at the West from our view point. On the other hand, we look at ourselves from the perspective of the West. This book not only shows us how to look at our past from our own perspective, but also how to critically examine the Western narrative both on itself and on India. INDIA IS DIFFERENT. IT MUST REMAIN IT'S TRUE SELF AND NOT BECOME A COPY OF THE WEST. That is the message of the book.
Read more
5 people found this helpful
Helpful
Report abuse

sagar
5.0 out of 5 stars An unprecedented systematic attempt of De-colonizing of Indian Minds
Reviewed in India on 7 July 2018
Verified Purchase
What to say about this modern day Rishi Rajiv Malhotra!!..His books should be taught to colleges & also to budding politicians as well to not fall for any manipulations by the western Elites.
'Being Different' is the law of Nature & we should celebrate diversity rather than being apologetic about expressing our Dharmic ideologies Just to comply to the forced fed gimmick such as Secularism..
Read more
9 people found this helpful
Helpful
Report abuse

Amazon Customer
4.0 out of 5 stars An interesting view on Hinsuism v. western religons.
Reviewed in India on 26 January 2019
Verified Purchase
The author has presented an unique view point upholding the virtues of Hinduism vis-a-vis the Abrahamic religions. He points out that because of the uniqueness of Hinduism, the westerners find it difficult to correctly understand it as a consequence of which they misinterpret and misjudge it. He says that its uniqueness lies in the concept of unity in diversity, its belief in oneness, its belief that realization is possible in this birth itself rather that in the life hereafter. This is calls 'embodied knowing.' He argues that Hinduism is not history-centric. Worth reading!
Read more
5 people found this helpful
Helpful
Report abuse

Balasubramanian Sivanathan
5.0 out of 5 stars Secularism
Reviewed in India on 13 July 2021
Verified Purchase
Hi All,

This is a book every Hindu must read. Before reading this book, I had watched Rajiv SIr video and thought why he is not for ALL GOD IS ONE narrative, all religion is same .I thought that was secularism. I though Rajiv Sir was not for UNITY. But after reading this book, my whole perception has changed. I think I should read more of his works.
The first day I read it, I was not able to sleep. Some times facts are not easy to digest. Like many thing we take for granted. Somehow this should reach teenagers and they should feel proud for being an HINDU. But India being secular we can't bring it in CURRICULUM. Atleast in Tamilnadu

Devesh
5.0 out of 5 stars A Treasure | read this book to know your self as a part of a great civilization and how to save it
Reviewed in India on 18 June 2020
Verified Purchase
After reading this terrific book, I feel we are obliged to have a person like Rajiv Ji with us, who has not only great understanding of Bharat's cultural heritage but is one of the few who is sticking his head out when forces in India and abroad are waiting to attack (in all ways) such voices. I think I never got to know so much about my heritage and civilization and how it is systematically subjected to annihilation after desperately trying to read here and there until I read it all here in a meticulously researched and presented volume. A lot of hard work and tenacity has gone into it. This is a book to gift to near ones.
Read more
2 people found this helpful
Helpful
Report abuse
See all reviews

Prad
5.0 out of 5 stars Must read
Reviewed in the United Kingdom on 15 April 2017
Verified Purchase
A must read book by every one before trying to implement the mere materialistic beliefs all over the world.
Read more
2 people found this helpful
Report abuse

Steve
5.0 out of 5 stars A real eye opener!
Reviewed in the United Kingdom on 15 July 2013
Verified Purchase
A must read for everyone, especially those of a Dharmic tradition. This is a brilliant book because the author essentially examines the assumptions from where various conclusions have been drawn in current times.
Read more
6 people found this helpful
Report abuse

S. K. Sharma
5.0 out of 5 stars Essential reading for every Indian and every spiritual or religious practitioner interested in the geopolitics of religion
Reviewed in the United Kingdom on 9 September 2013
Verified Purchase
Refreshing and candid, based on clear observation, unimpeachabel reasoning and articulated with simple clarity so much so that even the most hidebound religious "stick in the mud" would have reson to reflect. Salutations to Rajiv for producing such a magnificent and timely work.
Read more
6 people found this helpful
Report abuse

Sid
5.0 out of 5 stars Brilliant Book ...
Reviewed in the United Kingdom on 26 January 2015
Verified Purchase
A must read for every Indian and for eastern cultures in general ..
Read more
One person found this helpful
Report abuse

Prabhakara Bhatt
3.0 out of 5 stars Three Stars
Reviewed in the United Kingdom on 9 June 2016
Verified Purchase
Interesting but very repetitive.
Read more
Report abuse
See all reviews
Back to top
Get to Know Us
Connect with Us
Make Money with Us
Let Us Help You
EnglishChoose a language for shopping.
© 1996-2021, Amazon.com, Inc. or its affiliates