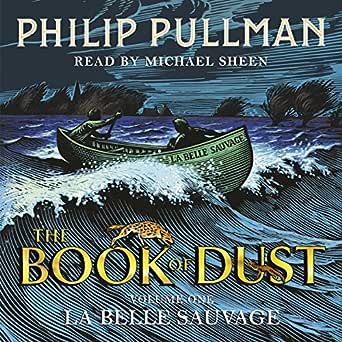 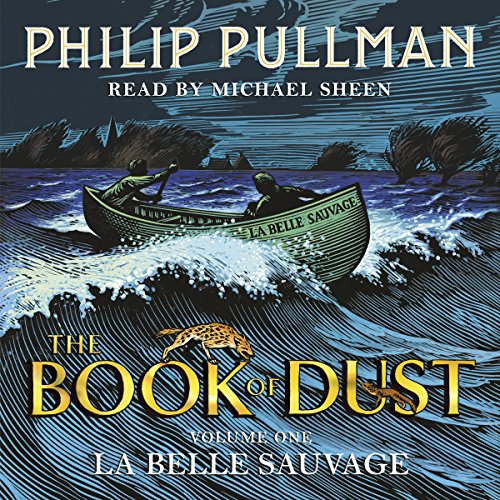 La Belle Sauvage: The Book of Dust, Volume One

4.6 out of 5 stars
4.6 out of 5
4,230 global ratings
How are ratings calculated?
To calculate the overall star rating and percentage breakdown by star, we don’t use a simple average. Instead, our system considers things like how recent a review is and if the reviewer bought the item on Amazon. It also analyses reviews to verify trustworthiness.

JUST ANOTHER ASPIRANT
5.0 out of 5 stars absolutely amazing!!
Reviewed in India on 21 November 2019
Verified Purchase
Absolutely magical, fascinating, out of the world, wild wild imagination rides, adventurous, dark, mysterious...and I am running out of words to express how amazing it is!!
Set in the alternative world of Oxford, where the church holds iron fist and the relation between rationality and religion are in bitter terms. The book is the prelude to the original magnum opus His Dark Materials so it gives a lot of detailed characterization. I accept the fact that the book is a voluminous reading of 550 pages almost but the energy and drama of the plot especially the 2nd part will ensure complete dedication.

Yashesh
4.0 out of 5 stars Loved the Paper Texture and Quality
Reviewed in India on 20 September 2019
Verified Purchase
I don't like books that have milky white paper with smooth texture. Specially when reading a book set in somewhat Victorian setting. The roughly textured paper of this book has a touch of antique that gives a proper novel reading feeling.

About the content, Lyra Silvertongue is one of my favorite characters is high fantasies, since I first read His Dark Materials in early 2000s. So, I was psyched to read the whole origin story and loved it too.

The only bummer was that they marketed the book as "darker than the original books". It isn't the case.

Meghana
3.0 out of 5 stars Book has tinted sheets.
Reviewed in India on 27 March 2018
Verified Purchase
The quality of the papers is very bad. I mean i am not a fan of old book feel. I like my novels with white sheets. Not able capture the colour in cam.
Read more

Joe
2.0 out of 5 stars Pullman pulls a fast one
Reviewed in India on 27 December 2017
Verified Purchase
The storyline is a bit disjointed. Not a compulsive read unlike his Dark Materials trilogy. Still, worth a dekko if you're a Pullman fan.
Read more
2 people found this helpful
Helpful
Comment Report abuse

Ashwin
5.0 out of 5 stars A wonderful addition to the Dark Materials universe.
Reviewed in India on 11 August 2018
Verified Purchase
I read the original trilogy many years ago as a teen and I've been waiting for more stories from this universe for a long time. This one did not let me down. Looking forward to more!
Read more
One person found this helpful
Helpful
Comment Report abuse

Amazon Customer
5.0 out of 5 stars Great writing
Reviewed in India on 9 August 2019
Verified Purchase
Waiting for the next installment of the book of dust in October. Great
Read more
Helpful
Comment Report abuse

Moushumi
5.0 out of 5 stars A story well told, a yarn well spun
Reviewed in India on 15 December 2017
Verified Purchase
To go back to the HDM universe was such a treat. Love the old world storytelling. No short cuts and no fakery or gimmicks. This is story gold.
Read more
Helpful
Comment Report abuse

M Barr
3.0 out of 5 stars Enjoyable but didn't have the magic of His Dark Materials
Reviewed in the United Kingdom on 24 June 2018
Verified Purchase
Like many other readers, I awaited this book with huge anticipation and pre-ordered it at the first chance. I felt a little underwhelmed and disappointed. It still holds the Pullman style of excellent character building, intrigue and richly detailed descriptions, but I found the story quite dull. It actually took me a little while to read the Book of Dust as I found myself switching to others (something that never happened with the other books). There were some very enjoyable cross-references to the His Dark Materials trilogy, and certainly it seems that an interesting story is building, but I felt this book was just a necessary precursor to the coming two books.
Read more
41 people found this helpful
Report abuse

PDexter
4.0 out of 5 stars Long anticipated
Reviewed in the United Kingdom on 4 November 2017
Verified Purchase
So lovely to be back in the other Oxford completely fallen in love again with the idea of daemons. Love the characters and the introduction of faerie . Couldn't quite get to grips with the idea of Lyra being a baby with a stinky nappy(ugh) but the thought of baby Pan made up for the baby stuff I'm not keen on. Didn't mind the strong language I thought it was in keeping with Alice's character and if you don't want your pre teen to read it because of a few random F' s that's their loss(in my opinion anyway).
Read more
44 people found this helpful
Report abuse

M. Mahauthaman
5.0 out of 5 stars A brilliant start to a new story
Reviewed in the United Kingdom on 14 February 2018
Verified Purchase
La Belle Sauvage is a thoroughly welcome reintroduction to the world of His Dark Materials.

While a separate and enjoyable story in its own right, several of the themes and characters have a lot more meaning if you have read the original trilogy, which I think will be more important as the series progresses (with the next books taking place after His Dark Materials, while this takes place before). That said, even a fairly rudimentary memory of the original story will more than suffice to equip readers for La Belle Sauvage, as we are thrown into the midst a catastrophic flood that seems set to alter the course of history in this alternate version of Britain.

The plot of the book itself is simple enough, but a lot of Pullman's strength lies in his character work and careful implementation of deeper themes and ideas into his stories. I believe the latter is lacking here, perhaps intentionally so as (much like Northern Lights) this is the first book in a trilogy and so serves more to simply introduce us to the major characters involved. In this, it does very well as grow gradually more attached to protaganists Malcolm and Alice as they experience numerous trials and develop as characters. I personally can't wait to read more about them, and how they tie into Lyra's world.

The scope of the book may be less ambitious than fans of the series were hoping for, but I'm glad Pullman chose to start the new trilogy on a small scale so readers could really get to know the new characters before the next books start tackle more complex themes. I loved it and cannot wait to read to more.

BookWorm
4.0 out of 5 stars Good fantasy adventure, though not in His Dark Materials league
Reviewed in the United Kingdom on 19 November 2018
Verified Purchase
La Belle Sauvage has an awful lot to live up to. It's the first of a planned trilogy of prequels to Philip Pullman's rightly celebrated 'His Dark Materials' trilogy. It's been many years since the final novel of that series was published, so for fans like me it was extremely exciting to hear we'd get another chance to inhabit the world created by Pullman for the books. But there's always an element of nervousness about such prequels - will they match the quality of the originals, or somehow undermine them?

The answer for this book at least is somewhere in between. The hero is Malcolm, a boy working at his parents' inn and helping out with oddjobs at the local nunnery. Malcolm is a nice, unassuming lad who makes a good central character as he is immediately sympathetic. He reminds me of Will, the hero in the 'His Dark Materials' trilogy. Some of the characters from the main series appear here, including Lord Asriel and Mrs Coulter, although not in major roles. Lyra, the star of the original novels, has plenty of page time but is only a small baby so doesn't get to shine in her own right.

The novel is exciting and bowls along at a good pace. The problem is that, as with any prequel, you know where it is heading. That takes away some of the tension because you know things have to turn out in a certain way. To really succeed, these books would need to find some sort of compelling subplot that doesn't have an immediate link-through the original series and thus hasn't already been spoiled for readers. There isn't that here. However, it is only the first book of three and it's quite possible the story will build and improve throughout the series, which was the case in the original as well.

It's certainly a good fantasy adventure and one you'll enjoy reading if you like this genre. It isn't outstanding and it isn't in the same league as the original set of books - but there is potential. I'll certainly want to read the next ones.
Read more
23 people found this helpful
Report abuse

Miss J. Wheeler
3.0 out of 5 stars It's OK, but I was a bit disappointed by it.
Reviewed in the United Kingdom on 11 August 2018
Verified Purchase
I'm guessing that nobody would buy this without having read His Dark Materials Trilogy....... because without having read them, this book won't really mean a great deal.
It's OK, but for me, it wasn't great. It is undoubtedly well written, but I wonder if I was expecting too much from it after having enjoyed His Dark Materials so much.
Maybe I need to wait for the other books that are yet to come..... its hard to say.
What I do know is that at the moment, I'm not planning to re-read this, whereas​ I've read His Dark Materials numerous times.
Read more
26 people found this helpful
Report abuse
See all reviews
Unlimited FREE fast delivery, video streaming & more
Prime members enjoy unlimited free, fast delivery on eligible items, video streaming, ad-free music, exclusive access to deals & more.
> Get started
Back to top
Get to Know Us
Connect with Us
Make Money with Us
Let Us Help You
EnglishChoose a language for shopping.
© 1996-2020, Amazon.com, Inc. or its affiliates