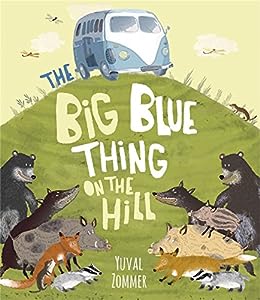 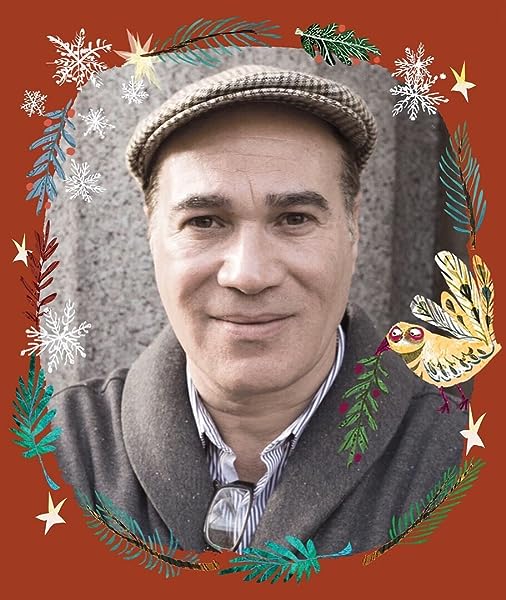 The Big Blue Thing on the Hill Kindle Edition

by Yuval Zommer (Author) Format: Kindle Edition
See all formats and editions
Sorry, there was a problem loading this page. Try again.
An outstanding debut picture book from author and artist Yuval Zommer. When the Big Blue Thing (a camper van to us humans) arrives on Howling Hill, the local wildlife all agree it has to go. First the wolves try to scare it away,then the bears, boars and foxes have a go. Finally, the wise owls suggest sending the smallest critters - the insects - to do the job. A cloud of bees, flies and dragonflies make sure that the Big Blue Thing runs away at top speed!
Read more
Previous page
Next page
Kindle e-Readers
Kindle Fire Tablets
Free Kindle Reading Apps
Available on these devices

When a mysterious "big blue thing" appears, forest animals are baffled and afraid, so they try to make it leave.Readers (or their parents) will know that the "thing" is a VW bus, but the animals don't. Nevertheless, they sense that it poses danger. After much speculation about what it might be (an elephant? a dinosaur? a thing?), the wolves suggest frightening it away. They howl at it in the night, all to no avail. The bears are equally unsuccessful in spooking it with growls, and the wild boars' huffs, puffs, pushes and shoves can't budge it either. The smaller creatures (foxes, badgers and weasels) then try to dig around it and bury it-only to have it make a noise. This frightens everyone, and they run to seek the counsel of the Wise Owls, who suggest that the very smallest of creatures form a "BIG BUG FLYING SQUAD" with "a snake or two...for good measure" to swarm the big blue thing. Lo and behold, the plan works, and the animals can enjoy their pristine wilderness in peace-until another visitor arrives to deliver a space-age punch line. While the story never explains why the thing is unquestionably a threat, it revels in its telling, and detailed, playful, digital art succeeds in heightening humor. One thing's for sure: This will be a big hit. (Picture book. 3-7) ― Kirkus Reviews Published On: 2014-10-22

Zommer makes a rousing debut with a story about forest creatures faced with a menacing adversary. "It's a meteorite!" cry the bears. "It's a spaceship!" shout the wolves. Spoiler: it's a VW microbus, and it stops right at the top of Howling Hill, the very spot where boars, badgers, bears, and foxes practice making terrifying noises at night. Several plans to defeat the so-called Big Blue Thing fail ("They huffed and puffed as they pushed and shoved with all their might") until the Wisest Old Owl instructs the animals to organize the local insects into a Big Bug Flying Squad, whose swarms achieve in short order what howling and growing could not. Zommer's digital artwork retains a cozy, painterly sense as he gives the boars splotchy coats, the insects delicate wings, and the microbus dainty white curtains (its human inhabitants never emerge). Best of all are his hilarious predators, whose cross-eyed stares, sheepish expressions, and toothy grins make them instantly loveable. Children will delight in the creatures' dogged efforts to reclaim their home, and they'll appreciate the bonus ending-after-the-ending, too. Ages 3-7. ― DL Reviews Published On: 2014-11-10

The residents of a peaceful and sleepy forest near Howling Hill are puzzled to discover a Big Blue Thing has appeared in the middle of the night. What could it be, and how can they get rid of it? In this hilarious tale the animals try all manner of mad-cap schemes to make the Big Blue Thing move on, but what IS this mysterious creature? A very clever story, beautifully illustrated. -- WRD ― WRD Books Published On: 2013-05-01

What is the blue monster on the hill, wonder all the animals. They all agree it has no place on their beautiful and peaceful hill so in turn the foxes, wolves, warthogs and even the bears try to scare it away, all to no avail. But then wise owl suggests sending the smallest creatures in - success! This is just brilliant to read aloud, with all the wonderful sounds and language for children to share. The delicate illustrations perfectly capture the beauty of nature in wondrous variety and superb attention to detail - each is a work of art in its own right. A beautiful book to treasure and enjoy over and over again. ― Parentsintouch.co.uk --This text refers to the hardcover edition.

Yuval Zommer graduated from London's Royal College of Art and went on to pursue a career as creative director for some of the UK's top advertising agencies.
His debut picture book, The Big Blue Thing on the Hill, published by Templar in 2014, was nominated for the 'Heart of Hawick' Children's Book Award 2015, in the best new picture book category, as well as for the 'Read It Again!' Cambridgeshire Children's Book Award 2015, for best debut by author/illustrator.

4.7 out of 5 stars
4.7 out of 5
42 global ratings
How are ratings calculated?
To calculate the overall star rating and percentage breakdown by star, we don’t use a simple average. Instead, our system considers things like how recent a review is and if the reviewer bought the item on Amazon. It also analyses reviews to verify trustworthiness.
Top reviews

helen
5.0 out of 5 stars love it!
Reviewed in the United Kingdom on 15 April 2014
Verified Purchase
If you are a fan of books with animal noises - and I am - you are on to a winner with this one! Fun story and plenty of sound effects as the animals try to scare away the "big blue thing". I got it as a present to go with Indigo Jamm's lovely wooden toy "Colin's camper van" and having spent AGES looking for a cool book with a blue camper van in it I was chuffed with this. Good twist at the end too! :-)
Read more
One person found this helpful
Report abuse

Jonny B
5.0 out of 5 stars This Big Blue Thing book is my favourite!
Reviewed in the United Kingdom on 15 March 2021
Verified Purchase
“Wow! This book is so good because it is very interesting. I love all of the sneaky animals. They are very clever like the foxes that tried to dig the Big Blue Thing away. My Dad likes the weasels.” Emma age 4
Read more
Report abuse

L D Rose
5.0 out of 5 stars Fun Read
Reviewed in the United Kingdom on 20 July 2014
Verified Purchase
Absolutely gorgeous, this story is packed full with witty and lovely characters.
The various insects are particularly charming and we all loved the surprise twist at the end.
Great fun for kids and grown ups (and anyone who ever owned a camper van or wish they had!)
Can't wait to get the follow up, highly highly recommended!

Yuval Zommer graduated from London’s Royal College of Art with an MA in Illustration.

He has worked as a creative director at many leading advertising agencies.

His passion for picture books has now won, and he is the author/illustrator of highly acclaimed children’s books. Yuval lives and works in an old house in Notting Hill where he overlooks a small garden which is visited by urban foxes, squirrels, birds and many insects, some of which later find their way into his stories. His other favourite places are The Natural History Museum and the Zoo.

'The Big Blue Thing on the Hill' (Templar 2014) was Yuval's debut picture book,

followed by 'One Hundred Bones' (Templar 2015) and he is currently working on a sequel.

His eagerly awaited non-fiction large format title 'THE BIG BOOK OF BUGS' (Thames and Hudson) will be published in seven languages in March 2016.