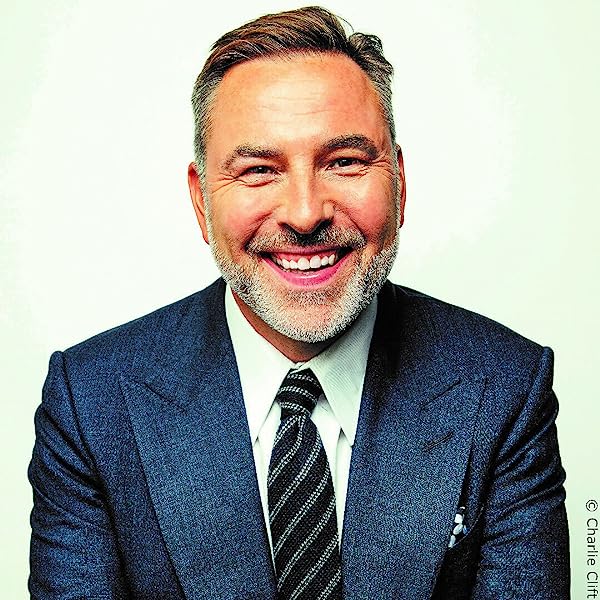 by David Walliams (Author)
4.8 out of 5 stars 4,281 ratings
See all formats and editions
Sorry, there was a problem loading this page. Try again.
FREE delivery: Friday, July 30 on orders over ₹499.00 shipped by Amazon Details

No Cost EMI: Avail No Cost EMI on select cards for orders above ₹3000 Details
Partner Offers: Get GST invoice and save up to 28% on business purchases. Sign up for free Details
10 Days Replacement Only
Amazon Delivered
No-Contact Delivery
Amazon Delivered
Amazon directly manages delivery for this product. Order delivery tracking to your doorstep is available.
No-Contact Delivery

“David William’s third book for children is a neat combination of hilarity and morality in the best spirit of the master story-teller of the genre, Roald Dahl” – Julia Eccleshare

Since 2008 David Walliams has taken the children’s literary world by storm. His most recent book RATBURGER,immediately went to no.1 in the children’s chart, while the PB of his previous title, GANGSTA GRANNY, currently dominates the UK charts and has sold over 100,000 PBs on top of 370,000+ HBs and 36,000 ebooks (Bookscan July 2013). Today, David is the fastest growing Children’s author in the UK. His books have been translated into 30+ languages and sold over 2 million copies in the UK alone.

Start reading Billionaire Boy on your Kindle in under a minute.

4.8 out of 5 stars
4.8 out of 5
4,281 global ratings
How are ratings calculated?
To calculate the overall star rating and percentage breakdown by star, we don’t use a simple average. Instead, our system considers things like how recent a review is and if the reviewer bought the item on Amazon. It also analyses reviews to verify trustworthiness.

SR Rout
4.0 out of 5 stars Another one in the unbeatable style!
Reviewed in India on 3 March 2017
Verified Purchase
It has a lot of humour! There are many small surprises in this story but all are not the end of the book. Like other David Walliams books,this one also has one main thought convied through the story. If you get the passage to depths of the Billionaire Boy then you will get the message too!
Read more
8 people found this helpful
Helpful
Report abuse

Anu Arora
4.0 out of 5 stars A great book
Reviewed in India on 30 September 2018
Verified Purchase
It is very interesting and has a big moral value but it is also full of humor. I really liked it and I think it is David William’s best book 📖
Read more

4.0 out of 5 stars A great book
By Anu Arora on 30 September 2018
It is very interesting and has a big moral value but it is also full of humor. I really liked it and I think it is David William’s best book 📖
Images in this review

sreeja
5.0 out of 5 stars Great book!!!
Reviewed in India on 22 December 2020
Verified Purchase
It teaches you that even if you have a LOT of money you should still be humble!!!!!! This is a very good book
Read more
Helpful
Report abuse

Mr. D. Mayson
2.0 out of 5 stars Mr Walliams needs a better editor
Reviewed in the United Kingdom on 16 January 2019
Verified Purchase
I realise this will not be a popular opinion, since David Walliams seems to be inexplicably flavour of the moment, but I don't like his books. Others have commented on the unnecessary, inappropriate content - and no I didn't particularly want to have to explain page 3 girls to my son either - but I guess everyone is entitled to different notions of what is morally correct.

But his writing style is terrible, to the point where he would not be published, in a million years, if his celebrity wasn't guaranteeing sales. It's inconsistent in the sense that the vocabulary, and sentence construction, slip between being for a 3 year old and a 15 year old. And giant chunks of the book consist of long, long, long lists that he believes to be very funny. For instance he talks about the awful meals served by the school's dinner lady. A couple of examples - perhaps dandruff soup and bat-vomit pie - would have served to illustrate the level of surrealism, but he insists on devising the entire week's menu , with starters, main courses, desserts and alternatives for each - running to 5 or 6 pages. Similarly, after the 'hilariously' named Peter Bread starts work at the school, Walliams makes the point that some names are just not good if you want to have control of a class - and invents several pages of them. There are several more such exhaustive lists in the book - and indeed all his books that I've read so far - and they're a massive yawn. It's the kind of writing every primary school kid produces, believing completeness to be necessary, and obsessing over details they think are hilarious. Half decent writers know to work in just enough detail to create ambience, whilst also pushing on the story.

Walliams produces reasonably imaginative stories - nothing to write home about - but would be better off working with a ghost writer and a better editor.

William
1.0 out of 5 stars Inappropriate for children
Reviewed in the United Kingdom on 17 June 2019
Verified Purchase
I felt compelled to read this (and other books by David Walliams) after some children in my class reviewed his books for World Book Day. With references to 'torrid affairs', Page 3 girls and Nuts magazine, this book is not appropriate for children and begs the question why Mr Walliams would be happy to discuss these matters with children at a book review or signing. The books are poorly written, grammatically incorrect and predictable. Michael Morpurgo he ain't.
Read more
26 people found this helpful
Report abuse

Z.F.
5.0 out of 5 stars You don't need to be a David Walliams pan to enjoy this book
Reviewed in the United Kingdom on 25 March 2019
Verified Purchase
Recommended by my nephew, who I speak to you every weekend. I like to have something that we can chat about together especially something that will make him laugh.

Billionaire Boy Is a really funny book, with morals to the story cleverly woven in so that it doesn't feel preachy, but a perceptive child with a good heart (which most of them are), will pick up on. Many of David Walliams jokes have had me laughing out loud!

Still relatable in terms of school days even in my 40s. I'd say this is definitely a book suitable for all ages, which will provide a lot of enjoyment for adults and children alike. I will no doubt read more of his books in the future, based on my experience with this one.
Read more
9 people found this helpful
Report abuse

Jo Farr
5.0 out of 5 stars Beautiful and heart warming
Reviewed in the United Kingdom on 1 January 2019
Verified Purchase
David Walliams never fails to amaze me with his moving and hilarious storylines. I love all the good messages in this incredible book and I would highly recommend. This book is all about a boy called Joe Spud. In his new life as a rich boy, he goes through all kinds of struggles, friendship, his dads awful girlfriend and money. Through this his dad is constantly showering him with money. But Joe only really wants one thing, to spend time with his dad. To find out what happens…
BUY THE BOOK
by Ramona aged 9
Read more
7 people found this helpful
Report abuse

giki
5.0 out of 5 stars brilliant
Reviewed in the United Kingdom on 22 February 2019
Verified Purchase
both my kids have read this (7+9), they loved it and fund it very very funny. They kept telling me wee stories about the things that they read - it has really fired up their imagination. David Walliams really does seem to have a knack for these kind of books. My son (9) was not that fussed about reading a few months ago - he much prefered 'screen time' but since I bought him a load of DW books it has all turned around - he reads as soon as he gets home from school and goes to bed earlier to read more. I love to see my kids wih their nose in a book.
Read more
5 people found this helpful
Report abuse
See all reviews
Back to top
Get to Know Us
Connect with Us
Make Money with Us
Let Us Help You
EnglishChoose a language for shopping.
© 1996-2021, Amazon.com, Inc. or its affiliates