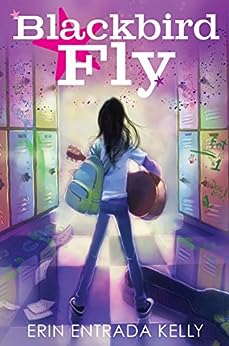 “Each character in Kelly’s debut novel . . . is portrayed with remarkable authenticity. The awkwardness and intense feelings inherent to middle school are palpable. Children’s literature has been waiting for Apple Yengko―a strong, Asian-American girl whose ethnic identity simultaneously complicates and enriches her life.” -- Kirkus Reviews (starred review)

“Will resonate with any student in middle school who has felt different and ostracized. The author has skillfully captured the various characters that populate Apple’s . . . school.” -- School Library Journal (starred review)

“[A] delightful debut . . . What sets Kelly’s book apart is the combination of a quirky narrator and details about living in a first-generation Filipino American household. . . . Through her love of music . . . Apple starts to soar like the eponymous blackbird of her favorite Beatles song.” -- Los Angeles Times Book Review

“A smart, sensitive, and resilient heroine who is authentic and relatable in her strengths and imperfections. This poignant novel would make for a particularly fine readaloud; expect visceral reactions . . . This is a must-read for those kids cringing at their own identities.” -- Bulletin of the Center for Children’s Books

“Kelly skillfully weaves together the story of misfit Apple, her love of music, and a budding romance with a new boy at school, while never losing focus on the central issue of what it is like to be the ‘other.’” -- Booklist --This text refers to an out of print or unavailable edition of this title.

Twelve-year-old Apple Yengko believes that there are at least three interesting facts about every person on Earth. Unfortunately, her three IFs make her an outcast in Chapel Spring Middle School in Chapel Spring, Louisiana:

When Apple is voted the third-ugliest girl in school, her life quickly falls apart. The boys bark at her in the halls and a rumor spreads that she eats dogs for dinner. Music is her only escape. All she needs is enough money to buy a guitar, and then she'll be able to change herself and her life forever. So what if her mother doesn't understand and thinks she's becoming too American? So what if her supposed best friends turn the other way . . .

It might be the Beatles and their music who save Apple, or Mr. Z (Chapel Spring Middle's awesome music teacher)—or it could be two unexpected friends who show her that standing out in a crowd is better than getting lost in it.​

4.7 out of 5 stars
4.7 out of 5
126 global ratings
How are ratings calculated?
To calculate the overall star rating and percentage breakdown by star, we don’t use a simple average. Instead, our system considers things like how recent a review is and if the reviewer bought the item on Amazon. It also analyses reviews to verify trustworthiness.
Top reviews

Caleb
2.0 out of 5 stars Not Really That Great
Reviewed in Canada on 9 July 2018
Verified Purchase
I was hoping to like this novel because of the blurb and the reviews. But I was sorely disappointed. I thought the idea was great to have a non-Caucasian protagonist for a change. We need to see a lot more diversity in middle grade and young adult literature and I was hoping this book would be a good addition. However, the writing style is boring. There's too much on-the-nose writing and distracting stage direction that takes readers away from the story. Plot development is poor. There's much more fluff than meat. If we take out some unnecessary descriptions that don't really add to the story, the book will probably be half its current thickness. It was difficult to turn pages because there's not much tension to keep you reading. Also, considering this is for a middle grade audience, I didn't like that the author was talking about making out/ kissing and that she used the word "stupid" one too many times. Yes, she may be projecting realism, but as a teacher, I wouldn't use this as recommended reading for young kids. It may not be the kind of book that some parents will approve of. The book had some setups that could have been explored further but fell flat. There wasn't much digging into the main character's Filipino culture besides the brief mention of pancit, kumusta ka, and atchara (an appetizer made of pickled papaya) which the author mistakenly referred to as a Filipino curse word. She could have added a bit more backstory to Apple Yengko that could have made her a unique protagonist readers can sympathize with. The novel just didn't shine for me, which is so sad as I really wanted to like this book. For those of you who are interested in middle grade books that explore themes of diversity, you're better off with Thanhha Lai's "Inside Out and Back Again" or Reyna Grande's "The Distance Between Us."
Read more
Report abuse

Ms. WB
3.0 out of 5 stars I loved the uncompromising and frequently unintentionally cruel mother
Reviewed in the United States on 15 February 2017
Verified Purchase
There were parts of Blackbird Fly that stood out and other that felt a bit leaden. I loved the uncompromising and frequently unintentionally cruel mother. Some loving mothers are like this--unaware of how cruel their words can be. I could envision this in an immigrant mother who wants what is best for her child, but might not understand the social dynamics of a new culture. I thought that was really well done. And I loved reading about Philippine food. I also liked the main character's interest in music. It felt pretty authentic. I liked elements of the girl who had previously been a friend--girl friendships at that age shift so much that this read as authentic.

What I didn't like were the supporting characters who, like Apple (the main character), are bullied at school. Or I liked them individually, but didn't buy into their grouping. Apple teams up with an unconventional boy and an obese girl--both of whom are targets for the bullies. Together they create their own little circle. It read like a cynical marketing grab aimed at Generation Z school diversity programs. I wish it didn't, but that was my take. It was too easy to group them together and none of them have anything quirks that make the friendships difficult. I also had a hard time believing that Apple would be called the various racist phrases given the current anti-bullying culture at school. It's certainly possible and I'm sure some readers can vouch for that, but kids who do this are usually ostracized pretty quickly, at least in my neck of the woods.
Read more
7 people found this helpful
Report abuse

Avery
4.0 out of 5 stars Erin Entrada Kelly back at it again
Reviewed in the United States on 7 August 2020
Verified Purchase
Blackbird Fly is an amazing book I have a history with it though. The first time I read this book was in third grade. I didn't understand that while at first because I was super young and it didn't really interest me, but read that again in fourth grade and I started to understand it. So now but I was a little older and I understand the problems of Apple it made more sense. so I'm going to tell you what I liked and disliked about this book if you want to read it. So what did I like about this book well firstly I loved that Apple loved the Beatlesbecause I like the Beatles I mean I've only listen to one of their songs but they sounded really good so another thing that I liked was like Apple told it in a great perspective. another thing was I felt really really like I was in the book and actually at one part,spoiler alert, but I during part whenever Alyssa had found Apple in mr.z swing choir auditions room when Mr.Z and the rest of the swing choir walked in and Alyssa accused Apple of stealing again I actually thought I was asking for a second if we awkward it was super weird but I was Apple and it was weird. So basically I think I was in the room with the listener cuz I was reading it when I'm reading I get really into my book and I'm just like wow I can't believe I'm in the book. And when she said Kelpto and Thief I got mad and it was an amazing experience. So overall I loved it.
Read more
One person found this helpful
Report abuse

PALH
5.0 out of 5 stars A Filipino American Kid Finds her Way in Lousiana
Reviewed in the United States on 27 August 2020
Verified Purchase
I loved that the protagonist, Apple Yenko is Filipino and at the same time so very American. She doesn't know it and feels different from her classmates in Lousiana. She is in fact, ashamed of her mother and the food she cooks. She finds her salvation in her music. Along her musical journey, she meets some really cool friends who appreciate herself. I enjoyed the book and recommend it to young adult readers.
Read more
One person found this helpful
Report abuse

Jessica Ferguson, Author, Speaker, Encourager
5.0 out of 5 stars Highly Recommended!
Reviewed in the United States on 28 May 2015
Verified Purchase
Blackbird Fly is one of the best books I've read in a long time. Erin Entrada Kelly did an amazing job capturing the cruelty youngsters inflict on each other, and showing the vulnerability of those who are "different." I highly recommend this book for your young readers--especially those who are struggling with self-esteem issues, are victims of cruel pranks, or just need encouragement. I wasn't ready to let go of these wonderful characters--especially Apple and Evan. Long live the Apples and Evans of this world! Lots of life lessons here. Fantastic positive read for youth and adults.
Read more
9 people found this helpful
Report abuse
See all reviews
Back to top
Get to Know Us
Connect with Us
Make Money with Us
Let Us Help You
EnglishChoose a language for shopping.
© 1996-2021, Amazon.com, Inc. or its affiliates