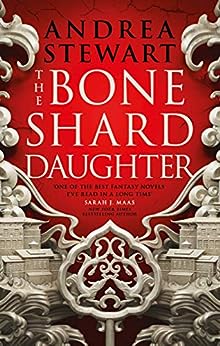 "Stewart gives us eerie, grungy bone magic that permeates through every layer of a fascinating and dangerous world."

Andrea Stewart is the daughter of immigrants and was raised in a number of places across the United States. Her parents always emphasized science and education, so she spent her childhood immersed in Star Trek and library books. When her dreams of becoming a dragon slayer didn't pan out, she instead turned to writing books. In addition to writing, she can be found herding cats, looking at birds, and falling down research rabbit holes

Natalie Naudus is a Taiwanese American actor who started out as an opera singer, with a Master of Music from the University of North Texas. She has a passion for stories and characters, and her language training has allowed her to develop a skill for accents and convincing foreign language dialogue. She excels at unique character voices and passionate storytelling. She lives in Virginia with her husband and two daughters.

Emily Woo Zeller is an Audie and Earphones Award-winning narrator, voice-over artist, actor, dancer, and choreographer. AudioFile magazine named her one of the Best Voices of 2013. Her voice-over career includes work in animated film and television in Southeast Asia.

An unmissable debut from a major new voice in fantasy, The Bone Shard Daughter is by turns intimate, epic and thrilling - a triumph of storytelling perfect for fans of City of Brass, The Poppy War and Empire of Sand --This text refers to an alternate kindle_edition edition.
Read more

4.4 out of 5 stars
4.4 out of 5
989 global ratings
How are ratings calculated?
To calculate the overall star rating and percentage breakdown by star, we don’t use a simple average. Instead, our system considers things like how recent a review is and if the reviewer bought the item on Amazon. It also analyses reviews to verify trustworthiness.
Top reviews

Gayatri Saikia - PER_FICTIONIST
5.0 out of 5 stars This fantastic atmospheric debut definitely soared to my expectations !
Reviewed in India on 23 January 2021
First and foremost, what I primarily look for a fantasy is a unique magic system that instantly grasps my attention. Well! It's a prerequisite and let's be honest fantasies are a portal to another realm so I WANT AN INTRICATE MAGICAL WORLD, thank you very much!

Now, from the sound of it, The Bone Shard Daughter already had my vote because uhmmmm magic from bone shards??? Monster like creatures called constructs built from the shards of bones of citizens are deployed and programmed to obey the commands of the tyrannical Emperor Shiyen. The magic system that Bone Shard Daughter is built upon is not only unique in every sense but also puts your brain cells to work trying to fit the story out the multiple narrators into the plot!

Lin, the emperor's daughter who is in a quest to retrieve or rather trying to solve the mystery behind her lost memories finds herself in a cut-throat competition against her foster brother Bayan for the throne.
Jovis, a smuggler who sets sail to find his longlost wife adorns the role our accidental hero quite dramatically and ohmygosh WE ARE HERE FOR IT! Oh and Mephi, Jovis's companion deserves a spinoff of his own!!
Phalue, the daughter of one of the island's governor under the Emperor's rule and next in line to be the governor finds herself questioning her father's rule under the influence of her girlfriend Ranami.
And now as the empire is in tatters with islands sinking and the Ancient Alanga civilisation returning the story takes a striking turn with secrets being bought to light , powers being revealed and alliances being formed.

Andrea makes it a compulsion for readers getting sweeped off their feet with the exhilarating drama packed in the story as it unwraps layer after layer. You would almost feel as if she is done with the twists only to be sucker punched by another ! *chef's kiss* And whatt this is only just the first part of the series? :")

This fantastic atmospheric debut definitely soared to my expectations and gave me some unforgettable characters to hold on to!
Read more
One person found this helpful
Helpful
Report abuse

Sapphire Bubble
4.0 out of 5 stars Richly imagine and wonderfully told
Reviewed in India on 16 February 2021
My Rating: 4.25 out of 5 stars

The Bone Shard Daughter shares with us an expansive world filled with magic and politics. There is a rebellion brewing in the air, a disgruntled princess, a smuggler, a governor’s heir and her love who grew up on the streets, a person with no memories of her past, and echoes of impending return of long gone empire. How all of these lives intertwined and worked as the roots of an enormous banyan tree that created the big picture was really interesting to see.

I really liked how every single character has a very distinct voice in this story. They are all very different and fun to read. Although, all of them do not get the same amount of space in the book, I found myself looking forward to each of POVs. I never felt like I was drudging through one POV to get to another character’s whose I liked more. I also like that there are no clear divides of good and evil when it comes to these characters. It is a complicated world and so are these characters as they live through it. I found myself completely engrossed in the stories of each of these characters.

The world of The Bone Shard Daughter is also extremely interesting because rather than having large swaths of land, it is covered in floating islands; some of which are being engulfed by the sea. I think, it added a very riveting element to the world in comparison to having continents or different countries because it presented certain challenges when it came to how an empire is sustained and governed.

It was very appealing to me, the way that different POVs in the book explore different aspects of human society and emotions. Lin is focused on her birthright and how that affects the lives of people in her empire, Jovis is drowning in grief and yet holding onto grief, Phalue and Ranami explore the distinctions of class, privilege and the ignorance that comes along with it, and Sand dissects the feelings of being lost in more ways than one and trying to find oneself.

To someone who sticks to YA because I find adult fantasies to be dense and have very flowery writing, this book was a swift ride with its beautiful writing that never feels suffocating or unnecessary. I also liked that rather than relying on exposition heavy chapters, the book disperses its very fascinating lore, history and magic all over the book.

However, the book does suffer from a slow pace, especially in the beginning. Although, I found those chapters to be beguiling, I was also consistently waiting for something to happen that would kick the entire book into gear rather than just certain characters. Apart from that, the book feels like a setup for the next installments of the series which left me wanting more explanations. I had seen many people call this a sapphic book (though it wasn’t the author or the publisher), it was kind of disappointing to find very less focus on the relationship between Phalue and Ranami; more so because I found their dynamic and conversations to be extremely compelling.

After finishing this book, I am certainly hungry for more. This book is a smashing adult fantasy debut that certainly filled my fantasy loving heart to the brim. I can’t wait to see more of these characters in the next book and ardently await its release. Would highly recommend this book if you are used to reading YA Fantasy and are intimidated by Adult ones. If you do not lie in that category, I would highly recommend it nonetheless.
Read more
Helpful
Report abuse
See all reviews

Manda Scott
5.0 out of 5 stars Beautiful, intricate, inspiring creation
Reviewed in the United Kingdom on 4 October 2020
Verified Purchase
Some first novels are worthy. Some are clever. Few are so beautifully written that they could be sold as literary novels and yet still have a gripping narrative and utterly absorbing characters. Lin, the Emperor’s Bone Shard Daughter is an utterly charming primary character, but Jovis, and Mephi provide an action-focused counterfoil. The magic feels smooth and real and beautifully ancient. I loved this. I’m really looking forward to the next one.
Read more
3 people found this helpful
Report abuse

Carolyn Percy
4.0 out of 5 stars Solid start to promising series
Reviewed in the United Kingdom on 13 September 2020
Verified Purchase
Thank you to NetGalley for the ARC in exchange for honest review.
An intriguing start to what looks to be an interesting high-fantasy series, with a good set ofcharacters and a great premise: shards of bone used to magically power monstrous constructs (think Frankenstein) and the people from whom these shards were taken, used as living batteries. All to keep control of an empire that is slowly but surely crumbling (in more ways than one) and where revolution is brewing, so the story really examines how a person's worth is decided.
Late in the story revelations both pull the rug out from under you (I don't want to spoil anything, but, again, think Frankenstein) and leave you wondering about developments in the next book.
Read more
One person found this helpful
Report abuse

Sarah Plant
4.0 out of 5 stars enjoyable read
Reviewed in the United Kingdom on 29 May 2021
Verified Purchase
Again would give this a 3 1/2 if that was possible. Definitely enjoyable read
Read more
Report abuse

Ms T Madden
5.0 out of 5 stars Great read.
Reviewed in the United Kingdom on 5 January 2021
Verified Purchase
This has been the first book in ages that I have thoroughly enjoyed. Great character building and plot. Thank you for creating such a fresh new fantasy world without the usual repetitive cliches and storyline.
Read more
Report abuse

Teenietinybookreview
1.0 out of 5 stars Dull as dish water
Reviewed in the United Kingdom on 19 May 2021
Verified Purchase
Great idea, dreadfully executed.
Read more
Report abuse
See all reviews
Back to top
Get to Know Us
Connect with Us
Make Money with Us
Let Us Help You
EnglishChoose a language for shopping.
© 1996-2021, Amazon.com, Inc. or its affiliates