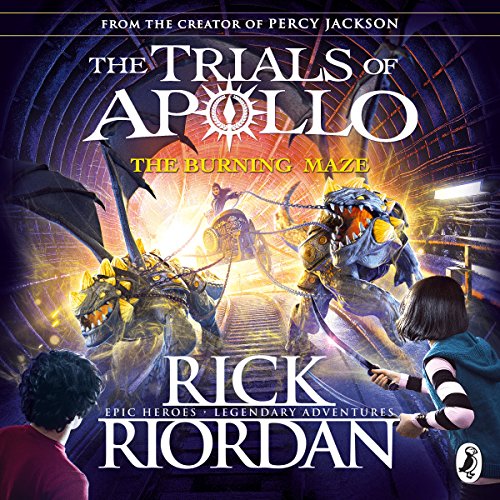 The Burning Maze: The Trials of Apollo, Book 3

By completing your purchase you agree to Audible’s Conditions Of Use Amazon's Privacy Notice.
Sold and delivered by Audible, an Amazon company
Share
4 people found this helpful
Helpful
Report abuse

Dharmendra Kumar Pandey
4.0 out of 5 stars Uncle Rick, you've done it again !
Reviewed in India on 1 June 2019
Verified Purchase
This book was @m@z1ng. Seriously,whenever I start to think that apollo might be getting a less arrogant, apollo goes and proves me wrong. To make someone scream at your character on purpose is a skill only few writers have. Uncle Rick proves himself again.
*SPOILERS*

This is your last warning. Seriously, if you haven't read the book, why are you even here?

Okay. I knew since a very long time that Jason was gonna die (see:SPOILERS). However that didn't make it any the less tear-jerking when it happened. I think his death proves as a major catalyst in apollo's character arc. I know, I just said that he is really annoying, but in the end i can't deny the fact that he is a changed person. If you'll see, in the past two books, the book ended with something like I have to do this to become a God again, or something like that. This book ended on an emotional note. 'I will remember '. This is why I love uncle Rick. He can crack a joke or make some sassy remark as easily as he can breathe and still make us cry.

I hope tyrant's tomb is even better.

I would've given this book a five star rating but the book itself was not in a good condition. Amazon has always given me books in wonderful condition. Just hope Amazon is careful next time.

Abhinav
5.0 out of 5 stars Good as Gold
Reviewed in India on 27 May 2020
Verified Purchase
I absolutely loved this book ,
it had a wonderful plot and was fun and exciting to read. i could not stop reading. No propblems occured for me in purchasing or delivery.
Spoliler :There are new characters and old yet many of them died. ;) ;) :(
Read more
One person found this helpful
Helpful
Report abuse
See all reviews

Ayela Marcuson
5.0 out of 5 stars the first book was Everyone You Love, the second was Everyone Is Gay
Reviewed in the United Kingdom on 9 May 2018
Verified Purchase
(this review contains SPOILERS apologies)
so I have noticed that each book has had a recurring theme within it: the first book was Everyone You Love, the second was Everyone Is Gay, and the third is Everyone Dies. The rate these are going, i’ll be surprised if anyone gets through the series unscathed!
However, as I said about everyone dying, Rick has grown up in his way of dealing with it. In the past books, the characters that have died have been minor, with little to no character development; or they had a Get Out Of Jail Free card *cough* Leo *cough*. In this book, when the one of the characters died, Rick honestly got the tragedy and pain spot on; i was crying my eyes out. It did not help that he chose to remind us with a coffin, later on (i started crying again). Another thing I enjoyed was that Piper had even more character development and showed that not everyone has a “happily ever after”, it was nice to see that, like real life, things don’t always go to plan, and shit happens.
Rick dedicated this book to the muse of tragedy, and, by the gods, he gave us plenty of that.
Read more
5 people found this helpful
Report abuse

Gary
4.0 out of 5 stars Another gripping book except....
Reviewed in the United Kingdom on 4 May 2018
Verified Purchase
As my title says, another gripping book by rick roirdan, the characters that return get more development (except one which i will
spoil and complain about later) and the new characters add fun depth. The villains are very good making you want to hate them, and all in all its a great page turned as always. As for why I dropped this one star though (this is the little spoiler bit next)

SPOILER the reason for the drop in star is for the treatment of Jason Grace, he is in the book for less than about 70 pages, and in that time we find out that piper dumps him, he then accidental uses lightning on someone that alerts guards, acvidently blows meg out a window and finally gets killed (and not in a heroic way in my opinion). Jason is not my favourite character but I did like him and this seemed a fairly poor way for him to go, my hope is there's some plan to bring him back or have him help in the underworld or something, cause this was honestly a bad way for the character to be treated, especially since it seems like every one else from the previous books is sorting out how they will live the rest of their lives or getting some proper send off
Read more
3 people found this helpful
Report abuse

Meike Leitsch
5.0 out of 5 stars Darker than its Predecessors
Reviewed in the United Kingdom on 12 May 2018
Verified Purchase
This book has everything I appreciate from Rick Riordan's writing: humour, action, adventure and, yes, heartbreak.
Those who have been following his many stories over the decades will find great sorrow in reading this one, but it is sorrow well deserved. In a much darker and much more mature tone than the previous books in this series, The Burning Maze raises the stakes when things spiral out of control as Apollo, his demigod master Meg McCaffrey and the satyr Grover attempt to free the third oracle from the evil triumvirate's clasp.
Read more
2 people found this helpful
Report abuse

Mr. Mark Sweeney
3.0 out of 5 stars good ig?
Reviewed in the United Kingdom on 1 September 2018
Verified Purchase
personally i love the rick riordan books and think they are all great reads, however, i found this book a little underwhelming. i couldnt seem to get as attached to the characters or fully emphasise with them as much as i have done previously. i felt that some issues were brushed over particularly when jason and piper were introduced. overall it was a good read just not as gripping as some of rr other books.
Read more
2 people found this helpful
Report abuse

W. Liu
4.0 out of 5 stars Things are getting dark...
Reviewed in the United Kingdom on 31 December 2019
Verified Purchase
This book has all the qualities of Rick's writing. This was an amazing read although I couldn't really get attached to the characters. Even tho Apollo is supposed to be whiny, sometimes I just found him annoying. Meg isn't likeable and Piper does not seem to be like a child of Aphrodite.

Sometimes I just wanted to skip a few chapters. Reading this book, I was mostly bored

Rick definetely took the "More people should die" comments seriously but <spoiler> Jason died in the worst way possible and I was crying my eyes out. Most of the characters who died in ricks books were minor or came back to life *cough* Leo *cough* but even though Leo isnt like, a main character or my favorite one his death really upset me.

Characters: 3/5 stars
Character Development: 3/5 stars
Plot: 5/5 stars
Overall: 3.5 - 4/5 stars
Read more
Report abuse
See all reviews
Back to top
Get to Know Us
Connect with Us
Make Money with Us
Let Us Help You
EnglishChoose a language for shopping.
© 1996-2021, Amazon.com, Inc. or its affiliates