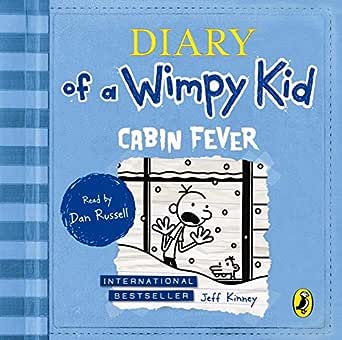 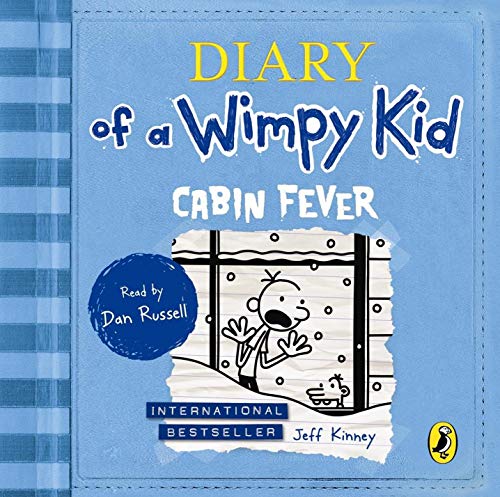 4.6 out of 5 stars
4.6 out of 5
3,221 global customer ratings
How does Amazon calculate star ratings?
Amazon calculates a product's star ratings based on a machine learned model instead of a raw data average. The model takes into account factors including the age of a rating, whether the ratings are from verified purchasers and factors that establish reviewer trustworthiness.

Amazon Customer
5.0 out of 5 stars awesome book !
Reviewed in India on 28 May 2020
Verified Purchase
Dairy of a wimpy kid cabin fever is an very awesome and cool book for kids like me (I am eight years old) Greg heffly
has many problems like he gets stuck home with no elecricity and he finds out manny did it and then he puts posters on the wall and scrubs of the marks and other stuff like that.
In the start he talks about his long lost doll,alfrando.But then in the end he actually finds the doll in the end of the book.So i like your books and my favorite book is of course the wrecking ball.I got this book a month ago and the first time I read it only it was a very good book.always read it and after the wrecking ball please write book 15.so bye and p.s your books rock.

Amazon Customer
5.0 out of 5 stars A must read for children and adults alike. Enjoyed it
Reviewed in India on 23 April 2017
Verified Purchase
A very good book. I enjoyed it even as an adult as it took me back to a lot of childhood memories. I can totally relate to this book. A good read for any age. Very funny. For an adult reader, this book will seem short as half of it is pictures. But still worth it. Very funny.
Read more
12 people found this helpful
Helpful
Comment Report abuse

SURESH MENON
5.0 out of 5 stars my favorite book
Reviewed in India on 7 September 2017
Verified Purchase
This is my favorite book and it is very useful for all the children and it is a very intresting book for me and I wish jeff kiney writes more book of wimpy kid also if I din't read all the books of wimpy kid. This is my favourite book. I love the book
Read more
10 people found this helpful
Helpful
Comment Report abuse

Amazon Customer
5.0 out of 5 stars Good book for kids
Reviewed in India on 18 May 2017
Verified Purchase
The book was in very good condition, the pages and printing both are good.
Read more
5 people found this helpful
Helpful
Comment Report abuse

SA
5.0 out of 5 stars excellent
Reviewed in India on 17 February 2016
Verified Purchase
when i brought this book 4 days i found it amazing.Great book
I wish when I another wimpy kid it should be same.
Thank you

vic
5.0 out of 5 stars Great book
Reviewed in the United Kingdom on 14 March 2020
Verified Purchase
Used book bought , really pleased thanku we will definitely be buying from you again, great book my 11 yr old don is loving it 😊
Read more
2 people found this helpful
Helpful
Sending feedback...
Thank you for your feedback.
Sorry, we failed to record your vote. Please try again
Report abuse

Call a spade a spade
5.0 out of 5 stars Reading Fever
Reviewed in the United Kingdom on 7 September 2016
Verified Purchase
Jeff Kinney is deserving of the title ‘#1 New York Times bestselling author.’ His books are perfect for pre-teens as they keep you entertained with the intriguing and hilarious situations the main character Greg finds himself getting into.

My daughter loves reading books and the Diary of a Wimpy Kids series is no exception. She has read, re-read and enjoyed every book so far without getting bored.

The originality of the comedic characters and plotlines creates a refreshing take on the overused ‘kid goes through High School’ concept. Props to Jeff Kinney for creating a series that keeps my daughter engaged and hooked. Definitely a good read that doesn’t disappoint.

Greg Heffley wants to start his own holiday bizarre, but he can't do it alone, so he drags in Rowley, so he and Rowley start to hand posters out at school. But the principal confiscates them. Greg suspects that is because Vice Principal Roy is worried that the school holiday bizarre might lose money. But this isn't going to stop Greg, but unfortunately, it gets out of hand because then, then Greg goes and does something really naughty............

Hilarious and imaginative. I love the way that Jeff Kinney has given Greg the hardest of times. I really like the way Jeff Kinney constructs his characters, especially Rowley. The way he acts like a little kid just makes me want soften up.

I also love the way Greg thinks that he can become famous just like that. He seems to think a lot of money and video games. He seems to think the world revolves around Twisted Wizard. He seems to value other people's opinion on what he looks like or what he does than his own, and that's why he is one of my all time favourite book and movie star.
Read more
One person found this helpful
Helpful
Sending feedback...
Thank you for your feedback.
Sorry, we failed to record your vote. Please try again
Report abuse

MR S D HUBBARDE
3.0 out of 5 stars okay
Reviewed in the United Kingdom on 18 August 2017
Verified Purchase
A funny book for all kids although not really a benefit in learning comes from the book! Wouldn't recommend to people who are looking for a literature benefit to reading, but would recommend to people who are trying to get their kids more involved into reading
Read more
2 people found this helpful
Helpful
Sending feedback...
Thank you for your feedback.
Sorry, we failed to record your vote. Please try again
Report abuse
See all reviews
Unlimited FREE fast delivery, video streaming & more
Prime members enjoy unlimited free, fast delivery on eligible items, video streaming, ad-free music, exclusive access to deals & more.
> Get started
Back to top
Get to Know Us
Connect with Us
Make Money with Us
Let Us Help You
EnglishChoose a language for shopping.
© 1996-2020, Amazon.com, Inc. or its affiliates