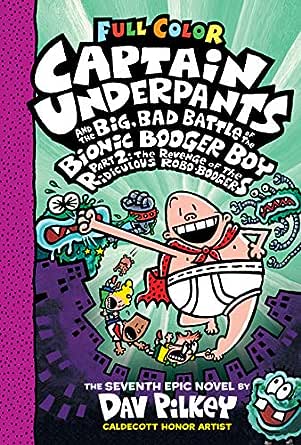 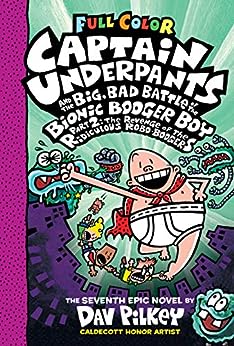 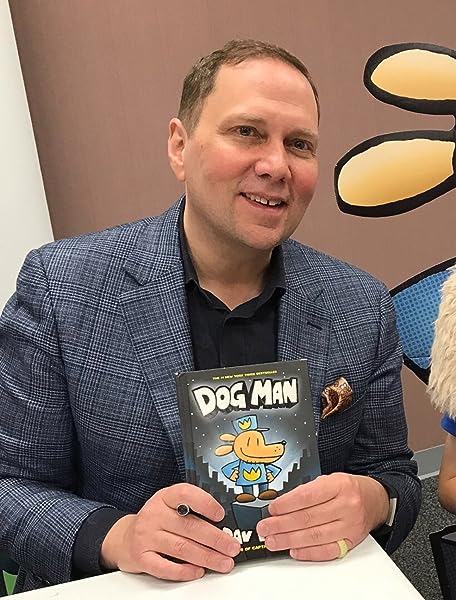 It all started in the sixth epic novel when Melvin Sneedly, a nerd, invented a "combine-o-thingy" that morphed Melvin, a robot, and (accidentally) mucus from his sneeze and created the monstrous Bionic Booger Boy. Unfortunately, in the chaos that ensues, the school principal Mr. Krupp's brain switches to Melvin's body and vice versa (making for a very unhappy school secretary). The diabolical Melvin becomes power-hungry when he realizes that he might be able to keep Mr. Krupp's Captain Underpants superpowers for himself! Can George and Harold stop Melvin from tyrannizing the school--and the world--in his new guise as principal and superhero?

The critics are CRAZY about UNDERPANTS! "Irresistible." -- Entertainment Weekly "Call Pilkey... the savior of the 'reluctant reader.'" -- USA Today "So appealing that youngsters won't notice that their vocabulary is stretching." --
School Library Journal "Pilkey's sharp humor shines, and is as much fun for parents as their young readers."
-- Parents' Choice Foundation "Combines empowerment and empathy with age-appropriate humor and action." --
Booklist "Celebrates the triumph of the good-hearted." -- The Educational Book and Media
Association --This text refers to the library edition.

Dav Pilkey has written and illustrated numerous popular, award-winning books for children, including the Captain Underpants and Dumb Bunnies series; Dog Breath, winner of the California Young Reader Medal; and The Paperboy, a Caldecott Honor Book. He lives with his wife in the Pacific Northwest. Visit him online at pilkey.com. --This text refers to the library edition.
Read more

4.9 out of 5 stars
4.9 out of 5
1,003 global ratings
How are ratings calculated?
To calculate the overall star rating and percentage breakdown by star, we don’t use a simple average. Instead, our system considers things like how recent a review is and if the reviewer bought the item on Amazon. It also analyses reviews to verify trustworthiness.

Ankur Shinde
5.0 out of 5 stars must buy
Reviewed in India on 31 March 2015
Verified Purchase
actually this book is not understandable but once you start reading these books you just get crazy and you will roll on the floor laughing,the same happened with me,these books are so cheap on amazon and they are fun.I have the complete collection of these books and they are real fun so just dont,worry go ahead and buy them.
Read more
2 people found this helpful
Helpful
Comment Report abuse

Career genii consulting pvt ltd
5.0 out of 5 stars HILARIOUS
Reviewed in India on 2 April 2018
Verified Purchase
Once you start reading one you can't stop.
I practically had to beg my mom for it
I'll give five stars to it

Koushik Pal
5.0 out of 5 stars captain underpants #7
Reviewed in India on 14 December 2017
Verified Purchase
all the captain underpant books are amazing especially this one I think this series is the best in the world. Aarush Pal.tra la laaaaa!
Read more
Helpful
Comment Report abuse

Nihir Shah
5.0 out of 5 stars Great book for small children age group 7-14
Reviewed in India on 1 September 2015
Verified Purchase
Got if for my son and he like it very much.
Read more
One person found this helpful
Helpful
Comment Report abuse
See all reviews

mrs lucy cushion
5.0 out of 5 stars Good value for money
Reviewed in the United Kingdom on 19 March 2019
Verified Purchase
My Son loves to read if he reads these books.So win,win.Great story too
Read more
Report abuse

why are you looking at the reviews?
5.0 out of 5 stars da good book
Reviewed in the United Kingdom on 29 October 2019
Verified Purchase
so it is a very good book as my child loved it. I would recommend it to anyone because why not. Also go and watch DanTDM,Chimpi chimp,maco plays12 and pewdiepie.NO T-SERIES FANS
Read more
One person found this helpful
Report abuse

Amazon Customer
3.0 out of 5 stars OK
Reviewed in the United Kingdom on 15 March 2019
Verified Purchase
Purchased as a gift.
Read more
Report abuse

claire
5.0 out of 5 stars Five Stars
Reviewed in the United Kingdom on 29 April 2018
Verified Purchase
Wonderful English in these silly and fun books. Good for expanding vocabulary and plenty of examples of alliteration
Read more
Report abuse

Kuskus
5.0 out of 5 stars for a second hand book was in excellent
Reviewed in the United Kingdom on 17 September 2016
Verified Purchase
my son finished this in 2 days! All I could here him do was laugh a lot! Has asked me to order more! for a second hand book was in excellent condition
Read more
Report abuse
See all reviews
click to open popover
Unlimited FREE fast delivery, video streaming & more
Prime members enjoy unlimited free, fast delivery on eligible items, video streaming, ad-free music, exclusive access to deals & more.
> Get started
Back to top
Get to Know Us
Connect with Us
Make Money with Us
Let Us Help You
EnglishChoose a language for shopping.
© 1996-2020, Amazon.com, Inc. or its affiliates