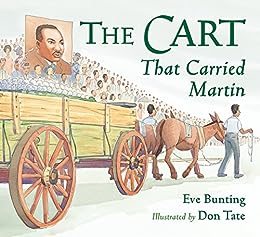 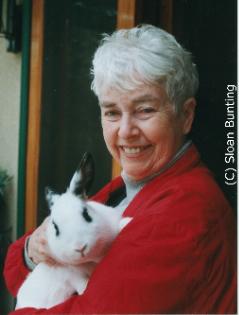 Eve Bunting has written more than two hundred books for young readers, including THE BABY SHOWER, THE WEDDING, and SMOKY NIGHT, the winner of the 1995 Caldecott Medal. Her books are often about important social issues. Born in Ireland, she now lives in California. --This text refers to the paperback edition.

The cart was old. Its paint had faded. It was for sale outside Cook's Antiques and Stuff. Nobody wanted it.
Then two men came along.
"This is exactly what we're looking for," one said. "We'll buy it."
But the store was closed.
They came by again.
The store was still closed.
"We'll borrow it," the first man said.
"We can't do that," the other replied.
"We can. We'll bring it back when he's finished with it."
A truck was brought to take away the cart. Friends painted it green.
"It's the color of grass when it rains," a woman said.
"He would like that," said a man.
The cart was moved again and parked at the Ebenezer Baptist Church. Waiting.
Two mules were hitched to the cart. The mules' names were Belle and Ada.
"Ordinary mules for an ordinary funeral," the people told one another. "That was what he wanted."
"The mule is a symbol of freedom," someone said. "Each slave got a mule and forty acres when he was freed." --This text refers to the paperback edition.

4.8 out of 5 stars
4.8 out of 5
47 global ratings
How are ratings calculated?
To calculate the overall star rating and percentage breakdown by star, we don’t use a simple average. Instead, our system considers things like how recent a review is and if the reviewer bought the item on Amazon. It also analyses reviews to verify trustworthiness.
Top reviews

Dea
5.0 out of 5 stars Fresh Take on MLK story.
Reviewed in the United States on 8 August 2021
Verified Purchase
This story offers a unique perspective on MLK. Must have for every elementary classroom library.
Read more
Report abuse

marci schwartz
4.0 out of 5 stars Good sense of history
Reviewed in the United States on 7 September 2018
Verified Purchase
Marvelous book. Good sense of history. Leads to fantastic classroom discussions in upper elementary grades
Read more
Report abuse
See all reviews
Back to top
Get to Know Us
Connect with Us
Make Money with Us
Let Us Help You
EnglishChoose a language for shopping.
© 1996-2021, Amazon.com, Inc. or its affiliates