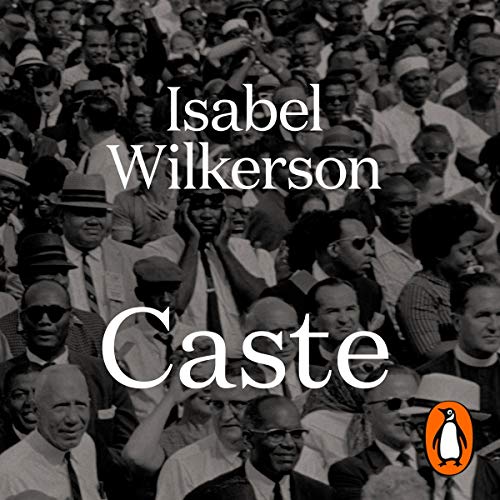 Caste: The Lies That Divide Us

By completing your purchase you agree to Audible’s Conditions Of Use Amazon's Privacy Notice.
Sold and delivered by Audible, an Amazon company
Share

J32
5.0 out of 5 stars read this book with Dr. Ambedkar's Work
Reviewed in India on 23 August 2020
Read it with Dr. B. R. Ambedkar, MA thesis at Columbia University, Castes in India: Their Mechanism, Genesis and Development and His solution to caste Problem "Annihilation Of Caste".
Read more
69 people found this helpful
Helpful
Report abuse

Amazon Customer
1.0 out of 5 stars The publisher is cheating the readers/customers
Reviewed in India on 21 October 2020
Verified Purchase
Though this is a book worth reading for every reader of comparative study of Caste and race, the publisher i.e. Penguin Random House is cheating the readers/customers by selling the same book with two different titles with huge differential in price. The first book is 'CASTE: The Lies That Divide Us', and the second book is 'CASTE: The Origin of Discontent.' Both the books are exactly the same not only in terms of contents but also the quality of printing a paper. However, the first books costs Rs. 635/ while the second book costs Rs. 2350/. The first book is published from UK and the second one from USA. This is a clear cut case of cheating and also a criminal offence which falls within the ambit of The Deceptive Trade Practice Act of 1965.
Read more
17 people found this helpful
Helpful
Report abuse

Pradeep Kumar
1.0 out of 5 stars Garbage thoughts, no facts...
Reviewed in India on 19 August 2020
I have gone through a book by Prof. M V Nadkarni on Hinduism. Taking reference from it, the vary new book on Caste by Wilkerson is absolute lie and an atempt to come on sensationalist sizzling headline. Don't support such authors and buy this book, a request from an Indian 🙏
Read more

1.0 out of 5 stars Garbage thoughts, no facts...
By Pradeep Kumar on 19 August 2020
I have gone through a book by Prof. M V Nadkarni on Hinduism. Taking reference from it, the vary new book on Caste by Wilkerson is absolute lie and an atempt to come on sensationalist sizzling headline. Don't support such authors and buy this book, a request from an Indian 🙏
Images in this review

SDas
1.0 out of 5 stars Forced effort to link Varna system of India with racism of US and Germany
Reviewed in India on 13 August 2020
Though author did a good amount of research to dig out history of racism in US. She equals caste with racism by giving example of Nazis where purity of race was considered as supreme. However, she wrongly superimposed that racism or caste system with India's ancient Varna system. It is not wrong to say after British, the caste system has been integrated into India's government and it deteriorated. However, several social reformers challenged the system.

Author is unaware about condition of upper castes in present day. So called general caste like Bramhins, Khastriyas have become untouchable in Govt. sectors. 50% reservation are given to so called SC and ST, but in spite of that author is accusing India about treatment of Dalits.

Author mentions same old Purusha Shuktam and Aryan Invasion Theory to prove the supremacy of Bramhin caste. As author accepts that she has read India's caste system within very short period of time. So, Ms.Wilkerson must read that origin of Aryan or race Aryan is a complete myth and it is abolished by latest DNA research.

Ronnie
5.0 out of 5 stars A modern epic!
Reviewed in India on 12 January 2021
Verified Purchase
A book like none other! The author strips casteism and exposes all its dirty secrets! It will give courage to those of us who suffer, the guts to stand up to the oppressors!
Read more
6 people found this helpful
Helpful
Report abuse

Manjot
5.0 out of 5 stars An uncomfortable but brilliant read
Reviewed in India on 28 December 2020
Verified Purchase
Must read book in 2020. Very well written. Only complaint is that she didn't delve deep enough into the Indian caste system (something that was expected because she brings up comparisons between the U.S. and India over and over)
Read more
3 people found this helpful
Helpful
Report abuse
See all reviews

Lori
1.0 out of 5 stars political bias at it's best
Reviewed in the United States on 4 August 2020
Verified Purchase
Wow!! I really loved her first book but I cannot say that about Caste. The first chapter is so biased towards the left it's laughable and I'm libertarian. I cannot recommend this book to anyone and if I could give it negative stars I would. How can we mend our country when you only see the speck in someone else's eye and not the log in your own. So sad.
Read more
1,517 people found this helpful
Report abuse

Kabron
5.0 out of 5 stars Tough Read for Some
Reviewed in the United States on 5 August 2020
Verified Purchase
Part One, Chapter One will be a tough read for half of the American audience. If this is you, push through - you may learn something.
Read more
1,078 people found this helpful
Report abuse

David
1.0 out of 5 stars Dangerous Sophistry
Reviewed in the United Kingdom on 24 September 2020
Verified Purchase
Nobody can dispute that race relations in the US have some distance to go before reaching an acceptable parity. Equally nobody, looking at US history since the civil war, could deny there has been huge progress.

To repeatedly compare the modern US, to Nazi Germany, is not only historical nonsense it is deeply offensive. If the case is being made that black people in the US are treated like Jewish people in Nazi germany, then it must be possible to imagine a Jewish Reichs Chancellor, Jewish people represented throughout the upper echelons of the legal profession and Jewish intellectuals, such as this lady, making a lucrative career of trotting round the world in the 1930’s criticising the German government. That is obscene.

This book’s entire premise is built on quicksand and will only exacerbate the growing racial tension being fomented by critical race theory. Real progress on race relations will be made in boring committee rooms where policy decisions are taken and laws tweaked. Those processes are set back hugely by this kind of grotesque exaggeration, which only increases polarisation.

If you want to understand the philosophy underlying this kind of tripe try Cynical Theory.
Read more
36 people found this helpful
Report abuse

Shopaholic
2.0 out of 5 stars Parochial, devoid of originality, pretentious and overstated. Misleading publisher's promotion
Reviewed in the United Kingdom on 14 October 2020
Verified Purchase
Readers lead by the publisher's notes to expect a scholarly study of the various forms in which caste divisions appear in societies, and their effects, will not find what they are looking for in this book.
Early in the introductory chapter it is made clear that "Us" in the title means Americans only. In a style irritatingly familiar to others, the author clearly assumes that should be the approach to any form of reportage, without actually stating it. So this book describes only the American caste system, something familiar to educated observers from outside the US of A, but which much of American society has a tradition of denying. There is no mention of the peculiarities of caste in Britain, and the caste conflict of Rwanda and Burundi is mentioned en passant, misrepresented as it usually is as an inter-ethnic conflict.
The author makes attempts at comparison of the American caste system, with its obsession with skin colour and ancestry, with the traditions of India, and the doctrines of the short-lived Nazi regime in Germany. She makes multiple claims to having carried out a volume of research into the subject, recounting her multiple eureka moments, yet at the same time describes how previous writers have made the same comparisons generations ago. This was more than a century in the case of comparison with Indian caste conventions, and of course it is well known that the pseudo-science beloved of the Nazi regime has had a widespread following in the USA long before the world heard of Hitler, and long after his fall. This of course is not limited to the USA.
A verbose, overly decorative and repetitive writing style, with frequent literary digressions, is something of a tradition in American reportage, but to the majority of the anglophone world these things are a pretentious distraction, which frequently disguise superficial content.
One wonders what readership this author is writing for. That she is addressing only her fellow Americans is clear enough, but educated Americans, able to look dispassionately at their society, will be familiar with this material - they have seen and heard it before - , and will likely also be offended and alienated by the extravagant and sententious overstatement. Those wedded to their tradition of denial will reject it. It might be of value to some who are less convinced that caste cannot exist in American society and are open to persuasion that it does and needs to be addressed. The book is of no conceivable interest to anyone outside this very specific demographic. Although such a heavily padded tome is unlikely to be an effective tool for this purpose, it is impossible not to wish her some success in this endeavour, and this is the reason for the second star, which comes with more than a suspicion that that may be over-generous.
Read more
20 people found this helpful
Report abuse
See all reviews
Back to top
Get to Know Us
Connect with Us
Make Money with Us
Let Us Help You
EnglishChoose a language for shopping.
© 1996-2021, Amazon.com, Inc. or its affiliates