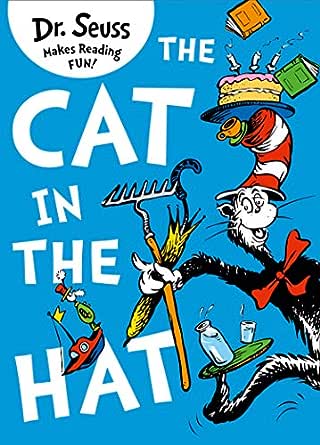 Subtotal ₹
Cart
View your cart
To add this eBook, remove any 1 eBook from your cart or buy the 25 eBooks present in the eBook cart
Review items in your cart
There was a problem adding this eBook to the cart
Kindle Edition
₹ 158.73 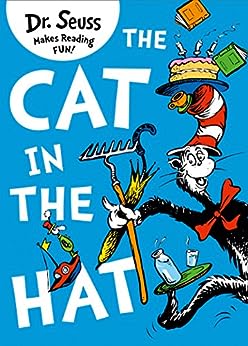 The Cat in the Hat Kindle Edition

Praise for Dr. Seuss:
“[Dr. Seuss] has…instilled a lifelong love of books, learning and reading [in children]” The Telegraph

“Dr. Seuss ignites a child’s imagination with his mischievous characters and zany verses” The Express

“The magic of Dr. Seuss, with his hilarious rhymes, belongs on the family bookshelf” Sunday Times Magazine

“The author… has filled many a childhood with unforgettable characters, stunning illustrations, and of course, glorious rhyme” The Guardian

Praise for And To Think That I Saw it On Mulberry Street:
“The cleverest book I have met with for many years. The swing and merriment of the pictures and the natural truthful simplicity of the untruthfulness.”
Beatrix Potter, author of The Tale of Peter Rabbit

Theodor Seuss Geisel – better know to millions of his fans as Dr. Seuss – was born the son of a park superintendent in Springfield, Massachusetts, in 1904. After studying at Dartmouth College, New Hampshire, and later at Oxford University in England, he became a magazine humourist and cartoonist, and an advertising man. He soon turned his many talents to writing children’s books, and his first book – And to Think That I Saw It on Mulberry Street – was published in 1937. His greatest claim to fame was The Cat in the Hat, published in 1957, the first of a hugely successful range of early learning books known as Beginner Books.

He may be an old standby, but he never lets us down. When in doubt, turn to the story of the cat that transformed a dull, rainy afternoon into a magical and just-messy-enough adventure. There's another, hidden adventure, too: this book really will help children learn to read. With his simple and often single-vowel vocabulary, the good Doctor knew what he was doing: hear it, learn it, read it--laughing all the way. The Cat in the Hat is a must for any child's library. --This text refers to an alternate kindle_edition edition.

We looked!
Then we saw him
step in on the mat!
We looked!
And we saw him!
The Cat in the Hat!

When Dr. Seuss's 'Cat in the Hat' made his flamboyant entrance in 1957 he started a revolution in the world of children's books. Here for the first time, was a book that made learning to read lots of fun. Dr. Seuss's riotous rhyming story and zany pictures were full of wit and charm and there was a surprise on every page.

'The Cat in the Hat' soon became a children's classic and has entertained generations of young readers ever since.

One unabridged cassette with music and sound effects.

The Cat in the Hat came to play one rainy, nothing-to-do afternoon--and changed the world of beginning children's literature forever. His hilarious antics are "recommended for all libraries" --School Library Journal (starred) The accompanying cassette has a listening side for nonreaders and a read-aloud side with page-turn signals for youngsters just learning to read. --This text refers to an alternate kindle_edition edition.
Read more

4.7 out of 5 stars
4.7 out of 5
6,919 global ratings
How are ratings calculated?
To calculate the overall star rating and percentage breakdown by star, we don’t use a simple average. Instead, our system considers things like how recent a review is and if the reviewer bought the item on Amazon. It also analyses reviews to verify trustworthiness.

Chinmoy
5.0 out of 5 stars I bought my niece this book and she loves it.
Reviewed in India on 21 August 2014
Verified Purchase
I have a 6 year old niece. I spent some time wondering what book would be an appropriate gift for a 6-year old and with some much required help from a friend, I zeroed in on this book.

The best thing about this book is that there are ample illustrations to keep the 6-year old mind engaged while also arousing a certain level of curiosity in them to want to read the book till the end. My sister just told me that my niece waits for my sister to get back form work and then, she reads out two pages to my sister and tells her the story. Two pages everyday.

This has been a wonderful gift, not just because it is a good book or because my niece loves it but also because it helped create memorable moments for a mother and her daughter.
Read more
15 people found this helpful
Helpful
Report abuse

anand babu
2.0 out of 5 stars buy grinch instead. or sesame street books.
Reviewed in India on 8 November 2019
Verified Purchase
was expecting something like the grinch. was expecting a story. this is a book thats more about teaching words and what to do and not to do inside a house. this may be a book for toddlers but sesame street books do not dumb down storytelling age wise.
Read more
Helpful
Report abuse

Nitya Anand
5.0 out of 5 stars What a Great Book!
Reviewed in India on 10 September 2013
Verified Purchase
I am in love with this book, and so is my three-year old son.
Dr. Seuss, that great magician, casts a spell with his words in it.

This book is a little story of two bored children, a brother and
sister duo, and a strange cat wearing a hat. Because of the cat,
a dull, wet day turns into an exciting day, full of fascinating calamities.

And all this told in an inimitable, rhyming language.

A strongly recommended book if you have a child to whom you can read
out a tale; and more so if you are just interested in English language.
Read more
One person found this helpful
Helpful
Report abuse

gunjan
5.0 out of 5 stars A great fun book for kids
Reviewed in India on 2 April 2015
Verified Purchase
My daughter loves the book and we take turns in reading as its too long for a beginning reader. Its a good book to read for a child who has done a year of phonics and knows the initial sight words, the story is too long for a child to read herself at this stage so ideally read a few pages or read to and with the child. The book quality and printing is good.
Read more
One person found this helpful
Helpful
Report abuse

Amazon Customer
5.0 out of 5 stars 5 STARS
Reviewed in India on 6 March 2020
Verified Purchase
My 4 yr old daughter just loves this book.. she keeps on asking me to read it.. after this book she have started asking me to read other books also which she never showed any interest before... so its a five star for me
Read more
Helpful
Report abuse
See all reviews

Ryan Barrett
5.0 out of 5 stars it has been beautifully designed to be read out aloud
Reviewed in the United Kingdom on 29 June 2017
Verified Purchase
I never read these as a kid. Now I'm a dad, and I needed some English-language books to read to my son (his native language is Dutch).

At first he didn't want to read The Cat In The Hat - it didn't have a monster, a tiger or a pooping dinosaur on the cover.

Thankfully papa insisted. My lad was immediately transfixed. The story has a rhythm, it has been beautifully designed to be read out aloud. It feels like it was written using a small set of fairly short words; these are then smartly combined to keep text fresh and build the rhythm.

That was about a week ago; now my son is constantly asking papa to read the Cat Hat book. What more can I say? It's a masterpiece.
Read more
17 people found this helpful
Report abuse

Home.life
5.0 out of 5 stars Rhyming Mischievous Cat
Reviewed in the United Kingdom on 29 December 2020
Verified Purchase
This story really kept my 4 years old attention... a rhyming story about a cat who visits a pair of children who have nothing to do a rainy day and the mischief he gets up to.

Also teaches them to tidy up after themselves which my son noticed so always a positive!

We purchased this after being a fan of the grinch who stole Christmas... another good book in the series to try.
Read more
2 people found this helpful
Report abuse

Manda N
5.0 out of 5 stars Beautiful book, great to read aloud
Reviewed in the United Kingdom on 5 May 2020
Verified Purchase
Chosen for a virtual lockdown read from us grandparents to 2 year old grand daughter. It’s quite a long story; 15 minutes to read but she kept attention throughout, Despite her not knowing the story previously.

sarah
5.0 out of 5 stars Brilliant book, very quick delivery
Reviewed in the United Kingdom on 10 November 2020
Verified Purchase
This is a brilliant book. Very quick delivery, and package was plain on the outside so perfect as I am using as a Xmas present. I’ve had a look inside just what I wanted lovely clear picture, I love the way the book goes it has. Good rythem. My son will love this book I can’t wait to start reading this with him.
Read more
Report abuse

A. Mather
5.0 out of 5 stars Oh My God! Is this still going? Awesome!
Reviewed in the United Kingdom on 1 July 2019
Verified Purchase
I grew up to Cat in the Hat - zany, outrageous, fun, educational... how wonderful that it's not only still going, but the #1 best-seller in children's poetry apparently! Definitely ordering a few versions for nostalgia and inspiration!
Read more
Report abuse
See all reviews
click to open popover
Unlimited FREE fast delivery, video streaming & more
Prime members enjoy unlimited free, fast delivery on eligible items, video streaming, ad-free music, exclusive access to deals & more.
> Get started
Back to top
Get to Know Us
Connect with Us
Make Money with Us
Let Us Help You
EnglishChoose a language for shopping.
© 1996-2021, Amazon.com, Inc. or its affiliates