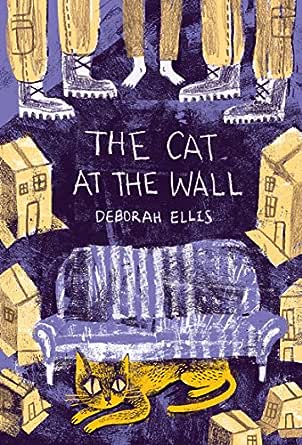 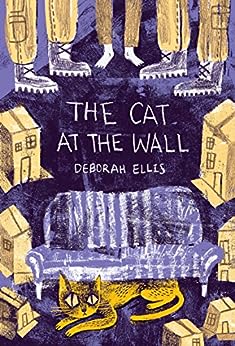 The Cat at the Wall Kindle Edition

“Without editorializing, Ellis's suspenseful and thought-provoking novel offers a touching, humane context for one of the world’s most intractable situations.” ― The New York Times --This text refers to the paperback edition.

Deborah Ellis, best known for her Breadwinner series, has donated more than $1 million in royalties to Canadian Women for Women in Afghanistan and Street Kids International. She has won many awards, including the Governor General’s Award and Sweden’s Peter Pan Prize. --This text refers to the paperback edition.

4.1 out of 5 stars
4.1 out of 5
10 global ratings
How are ratings calculated?
To calculate the overall star rating and percentage breakdown by star, we don’t use a simple average. Instead, our system considers things like how recent a review is and if the reviewer bought the item on Amazon. It also analyses reviews to verify trustworthiness.

Amazon Customer
5.0 out of 5 stars great read
Reviewed in the United Kingdom on 4 February 2019
Verified Purchase
bought this for my grand-daughter who is 10, she loved it and so did I
Read more
Report abuse

Heather Macdonald
5.0 out of 5 stars Compelling & compassionate story of life in Occupied Palestine
Reviewed in Canada on 23 August 2020
Verified Purchase
We studied this book as a possible education tool for younger teens / middle school.
We were delighted with the book's condition and contents.
The story, well and cleverly written, gave an honest, balanced perspective of life in Occupied Bethlehem.

Ali
4.0 out of 5 stars Really good book
Reviewed in Canada on 20 July 2015
Verified Purchase
This book was educational and fun to read. It's a great read and I highly recommend it to readers who like quicker reads, but still have great stories. Just wonderful.
Read more
One person found this helpful
Report abuse

Brianna
4.0 out of 5 stars OK!
Reviewed in Canada on 24 April 2016
Verified Purchase
This book was interesting but it was kind of boring at the same time through the end of the book
Read more
Report abuse

Leslie Sussan
4.0 out of 5 stars A unique perspective on the troubling Mideast conflict that gives ...
Reviewed in the United States on 21 January 2015
Verified Purchase
A unique perspective on the troubling Mideast conflict that gives both Israelis and Palestinians humanity by the device of seeing them thru the eyes of a cat. A cat that carries the reincarnation of an American teenager but somehow the matter-of-fact manner in which the perceptions of a cat and the memories of the kid makes this unlikely premise feel workable.
Read more
Report abuse
See all reviews
click to open popover
Unlimited FREE fast delivery, video streaming & more
Prime members enjoy unlimited free, fast delivery on eligible items, video streaming, ad-free music, exclusive access to deals & more.
> Get started
Back to top
Get to Know Us
Connect with Us
Make Money with Us
Let Us Help You
EnglishChoose a language for shopping.
© 1996-2021, Amazon.com, Inc. or its affiliates