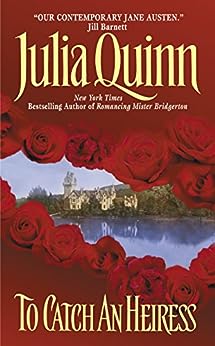 Caroline Trent is fed up with her greedy guardian, Oliver Prewitt, and his nitwit son, Percy. With only six weeks to go until she can claim her inheritance and rid herself of them, Percy attempts to forcibly seduce her. Fortunately, Caroline has a pistol at hand and she uses it--wounding the annoying man just enough to allow her to escape. Fuming, she flees the dark manor house determined to find employment and hide from her guardian for six weeks. But a bad night turns worse when a tall, dark stranger accosts her. Blake Ravenscroft thinks Caroline is a female spy, part of Oliver Prewitt's smuggling activities that include spying for Napoleon. He kidnaps Caroline, ties her to a bed at his nearby home, and grills her unsuccessfully before a friend arrives and tells Blake that he's captured the wrong woman. Caroline explains her predicament and, given what he knows of the larcenous Oliver Prewitt, Blake has no option but to offer her shelter. Caroline isn't a woman accustomed to sitting in the parlor sipping tea, especially while Blake's investigation has him involved in far more exciting, life-threatening activities. Blake isn't a man accustomed to having a woman ignore his commands. Sparks fly and passion sizzles between these two characters while a cast of endearing characters provide well-meaning assistance. To Catch an Heiress is both warm and wonderful, with witty dialogue and endearing characters. --Lois Faye Dyer --This text refers to an out of print or unavailable edition of this title.

With tens of millions of copies in print, #1 New York Times bestselling author Julia Quinn has been called “Smart, funny,” by TIME Magazine. Her novels have been translated into 35 languages and are beloved the world over. A graduate of Harvard and Radcliffe Colleges, she lives with her family in the Pacific Northwest.

Look for Bridgerton, based on her popular series of novels about the Bridgerton family, on Netflix.

The first of a funny, fast-paced, Regency-set duet from Julia Quinn, the bestselling author of the global phenomenon Bridgerton

When Caroline Trent is kidnapped by Blake Ravenscroft, she doesn't even try to elude this dangerously handsome agent of the crown. After all, she's been running from unwanted marriage proposals. Yes, Blake believes she's a notorious spy named Carlotta De Leon, but for six weeks until her twenty-first birthday, when she'll gain control of her fortune, hiding out in the titillating company of a mysterious captor is awfully convenient - and maybe just a little romantic, too.

Blake Ravenscroft's mission is to bring 'Carlotta' to justice, not to fall in love. His heart has been hardened by years of intrigue, but this little temptress proves oddly disarming and thoroughly kissable. And suddenly the unthinkable becomes possible - could this mismatched couple be destined for love?

'Light, pacy and full of feisty heroines' Guardian on the Bridgerton series

'Quinn is a master of historical romance' Entertainment Weekly

[thumbnails How to Marry a Marquis and The Duke & I]

4.4 out of 5 stars
4.4 out of 5
871 global ratings
How are ratings calculated?
To calculate the overall star rating and percentage breakdown by star, we don’t use a simple average. Instead, our system considers things like how recent a review is and if the reviewer bought the item on Amazon. It also analyses reviews to verify trustworthiness.
Top reviews

Randal
4.0 out of 5 stars Fun Read
Reviewed in the United Kingdom on 2 August 2018
Verified Purchase
With six weeks to go before her twenty-first birthday and freedom to control her own money, Caroline Trent is running away from an unwanted marriage when she's captured by dashing Blake Ravenscroft, who mistakes her for a French spy, Carlotta de Leon. She only needs a place to hide for six weeks, so, believing that she can come clean at any time, she plays along. There's a lot of quirky comedy in this book, which is good because the plot is frankly ridiculous. Blake and Caroline are engaging characters, however and James Sidwell, Marquis of Riverdale is an excellent secondary character.
Read more
One person found this helpful
Report abuse

Richard Stewart-Smith
5.0 out of 5 stars What a mixture of thoughts and ideas.
Reviewed in the United Kingdom on 10 April 2021
Verified Purchase
Julia Quinn has excelled herself in this book. The stiff upper lip of the English Male aristocracy meets with the wiles of a beautiful and delightfully deceptive woman. One of them will marry her but which one remains to be seen. So many other diversions along the way. Read on and enjoy as the pages turn beneath your fingertips.
Read more
One person found this helpful
Report abuse

little bookworm
3.0 out of 5 stars Below par for Quinn
Reviewed in the United Kingdom on 26 February 2015
Verified Purchase
Caroline Trent finds herself in rather unfortunate circumstances ahead of her twenty-first birthday, with her guardian desperate to marry her off to his son and as such secure her fortune. Her only option is to run away, unless she wishes to spend the rest of her life married to the abominable Percy that is. However, the last thing she expects when fleeing is to be captured by a rather dashing war office hero, who for some reason mistakes her identity as that of a treacherous spy. Still, as she finds herself being held at Seacrest Manor by Mr Blake Ravenscroft, Caroline wonders if this might not actually be the ideal solution to while away her time until her birthday in a few weeks; after all at least she's safe from the odious Prewitts. Blake, meanwhile, doesn't take long to realise his error; and its just as well really, for he couldn't live with himself harbouring such lecherous thoughts for a traitor. However, still grieving the loss of his former fiancée, nor is sure he can live with himself slowly and surely falling for Caroline.

Another romantic escapade from Quinn, with rather more action and adventure thrown in than most of her books. The story started off well, with Blake mistaking Caroline's identity and holding her hostage making for some amusing incidents. Unfortunately I thought the pace began to drag rather once he found out who she really was; and most of the rest of the book principally involves Blake stubbornly refusing to admit his feelings for Caroline to himself. Whilst one could understand his sense of guilt and conflict due to his dead fiancée, at the same time it did all start to seem rather repetitive and unnecessarily protracted; and I'm not how much I brought Blake as the tortured hero. Caroline makes for an amusing and generally appealing heroine; though at times I did find her a little provoking.

I liked the appearance of James, the Marquis of Riverdale, who has his own story in How to Marry a Marquis; and I have to say that James more often than not stole whatever scene he was in, his wry and light manner much more appealing than Blake's. Overall not my favourite of Quinn's books; I often found myself losing patience with the story and simply didn't find it as engaging as most of her others.

Book Gannet
4.0 out of 5 stars Ludicrous, but always funny
Reviewed in the United Kingdom on 9 May 2007
Verified Purchase
Caroline Trent is not having a good evening. Firstly her guardian's son, Percival, attacks her on his father's orders - for which she, quite rightly, shoots him in the shoulder. But no sooner has she escaped the house then she's accosted by a man who will insist on calling her Carlotta de Leon.

However, for Caroline this turn of events couldn't be more fortuitous. With just six weeks to go until she comes into her inheritance, she's more than happy to let this stranger keep her out of sight. After all, the last thing she wants is for her guardian to determine her whereabouts.

Yes, everything is going perfectly, until the Marquis of Riverdale arrives, takes one look at her and confirms that she is NOT Carlotta de Leon.

For Blake Ravenscroft, Caroline's captor, this news is both relieving and infuriating. Having worked for the War Office for nearly a decade the prospect of failing is galling in the extreme, but nowhere near as bad as being attracted to a traitor.

But Caroline is no traitor, just a young woman unconsciously tangled up by circumstance. Even so, Blake fights the attraction, because he's sworn never to marry...

The plot of this book is really quite ludicrous, and the fact that Blake is supposed to be one of the War Office's top agents never quite rings true. However, who cares, because this book is hilarious. The exchanges between Caroline and Blake veer from childishly entertaining to laugh-out-loud funny, with poor James (the Marquis) either caught in the crossfire, or doing his best to wind Blake up even further. And then there are the servants. Brilliant.

Too much of the plot remains hazy at best and unexplained (why Oliver is so desperate for Caroline's money, the traitor's plot and aftermath, etc), but to be honest it doesn't matter. Caroline is too amusing for such things to hold this book back.

Let your sense of humour loose, sit back and enjoy! (Then get hold of 'How to Marry a Marquis' because James is back, and he's wonderful.)

Kindle Customer
5.0 out of 5 stars To catch an Heiress
Reviewed in the United Kingdom on 29 March 2021
Verified Purchase
Totally different style. Kept me guessing what was going to happen all the way, I totally enjoyed the whole story couldn't stop til I got to end to find out the story end. Highly recommended this book. Bare in mind it is a 2 part book .what I mean is there are two books in this series
Read more
Report abuse
See all reviews
Back to top
Get to Know Us
Connect with Us
Make Money with Us
Let Us Help You
EnglishChoose a language for shopping.
© 1996-2021, Amazon.com, Inc. or its affiliates