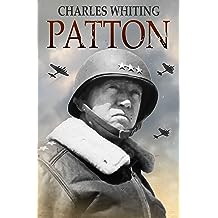 "In a cloud of thick dust, the convoy came to a halt. The tall immaculate general waited till the driver opened the door then descended slowly, his highly polished riding boots sinking into the Tunisian dust. For a long interval he eyed the scene around him. Then with an imperious slap of his riding switch against the calf of his boot, the general stalked towards the headquarters of the US II Corps. 'Old Blood an' Guts' had arrived to take command."

Charles Whiting (1926-2007) was one of Britain’s most prolific military writers, with over 300 books to his credit. He saw active service in the Second World War, serving in an armoured reconnaissance regiment attached to both the US and British armies. His books therefore possess the insight and authority of someone who, as a combat soldier, actually experienced the horrors of the Second World War.

Charles Whiting is the author of numerous history books on the Second World War. Under the pen name of Leo Kessler he also wrote a series of bestselling military thrillers featuring SS Assault Battalion Wotan, and the infamous "Dogs of War" Series.
Read more
Other Formats: Paperback
inclusive of all taxes 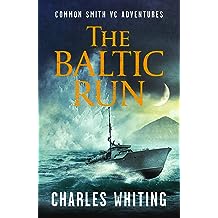 From the carnage of war a new hero is born.

1920. The slaughter of World War One is over, but already secret little wars are breaking out all over 'New Europe'.

Sub-Lieutenant de Vere Smith VC, at twenty the youngest Victoria Cross holder in the British Empire, is asked by the head of the Secret Service to help convoy arms to the Poles, under threat from Russia and Germany.

Jumping at the chance, Smith refits his old patrol boat, Swordfish and sets off for the Baltic. But enemy agents are everywhere, determined to stop Swordfish before its mission can even begin...

The first thrilling adventure in the Common Smith VC series, full of subterfuge and daring, from a master of the action novel. 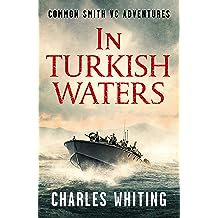 When an entire army retreats, Common Smith VC must turn the tide

Spring, 1922. The Greek army is retreating from Turkey and Kemal Ataturk, the Turkish dictator, intends to have their convoy sunk. The resulting chaos will help a defeated Germany and Russia, unless someone intervenes.

'C', the mysterious head of the British Secret Service, knows that Britain is already far too stretched, the French have their own problems, and America has retreated into isolation.

As always in such situations, he turns to young Common Smith VC and his gang on Swordfish. Against all odds, Smith must fight his way to Alexandria, where his real mission will begin...

The second instalment of Common Smith's adventures, perfect for fans of Max Hennessy and Alexander Fullerton. 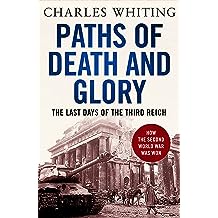 The epic story of how the Second World War was won.

On 4 January 1945, General ‘Blood and Guts’ Patton confided gloomily to his diary, ‘We can still lose the war.’ The Nazis were attacking in Eastern France, Luxembourg and Belgium. General Eisenhower’s allied armies had lost over 300,000 men in battle (with a similar number of non-battle casualties) and they were still in the same positions they had first captured three months before.

Would the German will to resist never be broken?

Veteran military historian Charles Whiting assembled individual stories from the frontline as the war entered its last bloody, but ultimately victorious phase. From material such as diaries, interviews and battalion journals he vividly builds up a picture of the soldiers and combatants. As the greatest conflict of them all came to its epic crescendo, those on the ground knew that paths that lead to glory could also lead to death… 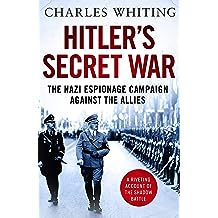 During the Second World War there was, behind the scenes, a bitter conflict was stamped ‘Top Secret’. It was a war of infiltration and misdirection, espionage and assassination. And the Nazis were determined not to let anyone best them.

Revealing the full extent of Nazi’s secret intelligence networks, bestselling author Charles Whiting takes the reader into organisations like the Abwehr, Germany’s renowned military intelligence bureau, and features interviews with key figures like such key figures as Giskes, who fooled the Americans at the Battle of the Bulge, and Ritter, who stole the highly classified US Norden bombsights. There are accounts of hubris, heroism and cowardice; stunning triumphs and excruciating defeats, all out of the public eye and revealed only decades later.

Over a period of thirty years, Whiting met and interviewed a huge number of Nazi and Allied survivors involved in what came to be known as ‘The War in the Shadows’. The result is an extraordinary and gripping story combining great cunning with staggering incompetence. 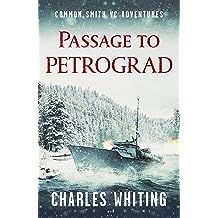 Common Smith's most dangerous mission yet...

Russia, 1924. Lenin, Communist Dictator of Russia, is dying. In the wings, his chief aides are jostling for power, and in the provinces revolution is brewing once more. Soviet Russia is on the brink of explosion...

Caught up in the turmoil is Serge, the illegitimate teenage son of Tsar Nicholas II, who was executed by the Communists in 1918. Determined to save this member of his extended family, King George V of Britain orders his rescue.

"C", the elusive head of the British Secret Service, can think of only one man for the task: Common Smith VC and the crew of Swordfish. Their orders, to smuggle Serge out of Petrograd and return to Britain.

But Serge hasn't only attracted the attention of the British. The only surviving descendent of Nicholas II, he could be a rallying point for Russians who want to reinstate the Tsar. And there are forces who will stop at nothing to ensure that doesn't happen...

A high-stakes, tension-filled adventure perfect for fans of Alex Gerlis and Max Hennessy. 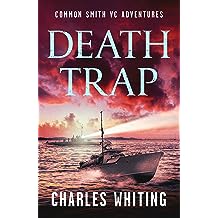 Yugoslavia, Winter 1924. The British official courier plane from Cairo to Gibraltar has been forced down in the mountains off the Yugoslavian coast by snow.

The plane was on its way to London bearing vital documents about Moscow's plans for the Balkans, including an uprising in Yugoslavia. It is vital that no one finds these plans, including the Royal Yugoslavian Secret Police, for they too have communist sympathisers in their ranks.

Now, in a race against time, Common Smith and the crew of the Swordfish must sail to the island of Vis, then up the River Dvar and smuggle themselves into the snow-bound mountains. Their mission: recover the British airmen and the sensitive documents they were carrying.

But the elements and Yugoslavian Secret Police are not the only forces Common Smith is contending with. A mysterious Communist leader is hiding out in these mountains with his men, and they know about the crash too...

A gripping, edge-of-your-seat race against time from one of the masters of military adventure fiction. 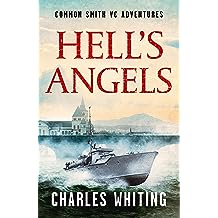 When peace plans
are threatened, Common Smith swings into action

Germany, 1929.
England, France and the USA are preparing to de-militarise the West Bank of the
Rhine. German nationalists, financed by the great industrialists, have other
ideas.

They plan a series of strikes against Allied
troops marching westwards. The Hell's Angels - barnstorming German ex-pilots
who fled to America after the war - are recalled to Germany for the final
attack.

Common Smith VC and the crew of Swordfish
must stop the Hell's Angels reaching Europe... 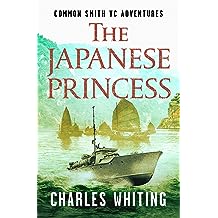 China, 1927. Communists and Nationalists are fighting each other, and bandits and warlords plague the country.

Imperial Japan is eager to provoke a war, and when Princess Sadie, a member of the Japanese royal family, is kidnapped, her life is at stake. For if she dies, the Japanese will have the excuse they need to invade.

The mission of Common Smith VC and the redoubtable crew of the Swordfish is to rescue Princess Sadie and avert calamity. It is a race against time - if they don't succeed, the results could be devastating...

The sixth Common Smith VC adventure, where both tensions and the stakes couldn't be higher. Perfect for fans of Max Hennessy and David Beaty.

Read more
Other Formats: Library Binding
inclusive of all taxes 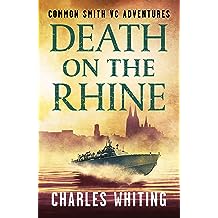 Germany, 1923. The beaten Fatherland is in turmoil, inflation is raging and millions are unemployed. Adolf Hitler is raising a right-wing traditionalist Germany to march on Berlin and Von Horn, the perverted head of the secret German Intelligence Unit, plans to murder the Commander-in-Chief of the British Army of the Rhine.

"C", head of MI6, orders Common Smith VC to sail secretly for the army HQ at Cologne and prevent the assassination. If he fails, "C" warns him, then the whole of Germany will be reunited under a fanatic, who will lead them into another terrible war against Western Europe...

The third Common Smith adventure, from one of the most prolific war fiction writers of the twentieth century. Perfect for fans of David Beaty and Alexander Fullerton. 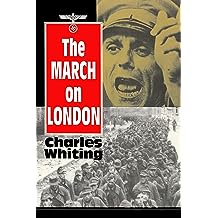 The March on London: Covert operations in the Battle of the Bulge -December 1944 6 Nov, 2018
by Charles Whiting
( 1 )
₹449.00
Another aspect of the Germans’ thorough plans was the amazing scheme, somehow transmitted to Britain, for a break by all German prisoners of war. By all odds the most Wellsian phase of the German war of nerves, it has still not been completely explained. We do know that German prisoners began organizing for a mass break; that they plotted to seize arsenals, obtain tanks and actually prepare the way for German landings in England.
Captain Robert Merriam (official historian to the US Ninth Army in the Second World War)
No escape story of the Second World War was more daring in concept, more fantastic, more ambitious, more hopelessly fanatical than that of the prisoners of Devizes. It began with a bold master-plan for a mass break-out of German POWs from prison camps in wartime Britain.
Colonel Alexander Scotland (head of the British POW Interrogation Service in the Second World War) 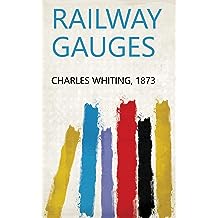 Railway Gauges 4 Sep, 2018
by 1873 Charles Whiting
₹636.44
This is a reproduction of a classic text optimised for kindle devices. We have endeavoured to create this version as close to the original artefact as possible. Although occasionally there may be certain imperfections with these old texts, we believe they deserve to be made available for future generations to enjoy.
Read more
inclusive of all taxes