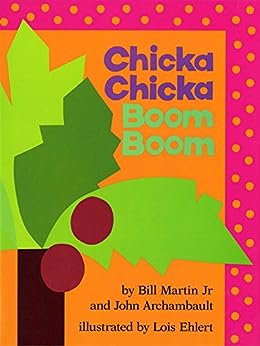 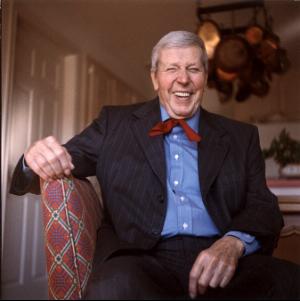 Bill Martin, Jr. (1916–2004) has been called “America’s favorite children’s author.” He wrote more than 300 books for children, including the classic texts Brown Bear, Brown Bear, What Do You See?, illustrated by Eric Carle; and Chicka Chicka Boom Boom, illustrated by Lois Ehlert.

John Archambault is a poet, journalist, and storyteller who worked with Bill Martin, Jr. on several projects. He lives in Idyllwild-Pine Cove, California.

The 26 characters in this rhythmic, rhyming baby book are a lowercase alphabet with attitude. "A told b, and b told c, 'I'll meet you at the top of the coconut tree'"--which probably seemed like a good idea until the other 23 members of the gang decided to follow suit. Lois Ehlert's chunky block illustrations show the luxuriant green palm standing straight and tall on the first page, but it begins to groan and bend under its alphabetical burden. First the coconuts fall off, then ("Chicka chicka... BOOM! BOOM!") all the letters also end up in a big heap underneath. A very simple board-book version stops there, but this original text goes on to introduce the helping hands of the 26 uppercase "mamas and papas and uncles and aunts." (Baby to preschool) --Richard Farr --This text refers to an alternate kindle_edition edition.

A told B, and B told C, I'll meet you at the top of the coconut tree. In this lively alphabet rhyme, all the letters of the alphabet race each other up the cocunut tree. Will there be enough room? Oh, no - Chicka Chicka Boom! Boom! The well-known authors of Barn Dance and Knots on a Counting Rope have created a rhythmic alphabet chant that rolls along on waves of fun. Lois Ehlert's rainbow of bright, bold, cheerful colors makes the merry parade of letters unforgettable. END --This text refers to an alternate kindle_edition edition.
Read more

4.9 out of 5 stars
4.9 out of 5
22,293 global ratings
How are ratings calculated?
To calculate the overall star rating and percentage breakdown by star, we don’t use a simple average. Instead, our system considers things like how recent a review is and if the reviewer bought the item on Amazon. It also analyses reviews to verify trustworthiness.

Tannu Suri
2.0 out of 5 stars Not for younger kids, simple paper not a board book
Reviewed in India on 24 May 2020
Verified Purchase
Ok .. the book is fine, however I just don’t it’s for smaller babies, it’s expensive to say the least and that too it’s not hard cover, my one year old would want to just tear it apart and I don’t think the book would stay out for a long time.
Do returning, for young toddlers who don’t understand that books are to be treated delicately I don’t think it’s suited.

Saswat
5.0 out of 5 stars Amazing rhyme and rhythm book
Reviewed in India on 5 August 2019
Verified Purchase
Its so much fun to read it aloud to the baby. I read it at a fast pace and my 18 month old baby loves listening to the it. Only thing is the illustrations seem quite repetitive at the first glance, but my baby slowly took to it and its one of his favourites now.
Read more
Helpful
Report abuse

Nidhi
5.0 out of 5 stars Buy without thinking
Reviewed in India on 19 August 2019
Verified Purchase
Simple and fun.
A fun and easy way to teach abcd

Must sing this in your own rhyme to the child.
The colours and illustrations are engaging.

Murshy
5.0 out of 5 stars Go for it✌🏻✌🏻
Reviewed in India on 2 March 2019
Verified Purchase
Helps ne alot to teach ma lil girl alphabets.. she is not interested in learbing alphabets.. but this book, i got review from google and purchased it here from amazon. Nice packing and timely delivery 👍🏻👍🏻 Recommend
Read more

5.0 out of 5 stars Go for it✌🏻✌🏻
By Murshy on 2 March 2019
Helps ne alot to teach ma lil girl alphabets.. she is not interested in learbing alphabets.. but this book, i got review from google and purchased it here from amazon. Nice packing and timely delivery 👍🏻👍🏻 Recommend
Images in this review

Amazon Customer
5.0 out of 5 stars Great for children just starting out
Reviewed in India on 10 June 2018
Verified Purchase
It's a lovely book and arrived in good quality. I just wish i had purchased the board book. Proves to be more sturdy with toddlers. My son loves it. Fun way to introduce them to the alphabet. 😊
Read more
Helpful
Report abuse

Acepilot
5.0 out of 5 stars 3yr olds favourite, had to read 7 times on the first day!
Reviewed in India on 13 September 2017
Verified Purchase
My 3 yr old sons absolute favourite book! The rhyming is really catchy and it's great that there are YouTube videos of the Chicka Chicka Boom Boom song to follow along with! This was the extended version which was an added bonus :)
Read more
One person found this helpful
Helpful
Report abuse

Ashish
2.0 out of 5 stars I got paperback instead of board book
Reviewed in India on 16 August 2020
Verified Purchase
the book I received is not a board book. It's paperback only which the seller transinfopreneur is selling as board book.
So avoid this seller and the book is more about rhymes and the alphabets a,b,c. Suitable for older kids only, not little babies

2.0 out of 5 stars I got paperback instead of board book
By Ashish on 16 August 2020
the book I received is not a board book. It's paperback only which the seller transinfopreneur is selling as board book.
So avoid this seller and the book is more about rhymes and the alphabets a,b,c. Suitable for older kids only, not little babies

Vishnu Kaura
3.0 out of 5 stars Poor quality book/ paper
Reviewed in India on 10 September 2020
Verified Purchase
The book is great but the paper quality is terrible. Feels like someone photocopied a book on glossy paper. Not sure if this is a genuine copy. Hope its not a fake. Quite disappointed.
Read more

3.0 out of 5 stars Poor quality book/ paper
By Vishnu Kaura on 10 September 2020
The book is great but the paper quality is terrible. Feels like someone photocopied a book on glossy paper. Not sure if this is a genuine copy. Hope its not a fake. Quite disappointed.
Images in this review

Manchester_Mum
5.0 out of 5 stars Fun, catchy rhyme but confusing.
Reviewed in the United Kingdom on 11 January 2020
Verified Purchase
Ok my 3 year old loves this book, she gets upset when the coconuts fall off the tree but loves it’s catchy rhyme. I feel it confuses her. They are taught the phonetic alphabet (ah, buh, cuh, duh) in nursery and early years so this book confuses what she’s learning with the A, B, C It’s still a fun story and it’s a regularly chosen by her for us to read but I wouldn’t count it on a learning book
Read more
4 people found this helpful
Report abuse

dlw
5.0 out of 5 stars Babies, Toddlers Love This Book
Reviewed in the United Kingdom on 17 April 2019
Verified Purchase
I live in the US, my grandson in the UK. When he was just a few months old, he visited my house for 10 days during which time we read this book over and over. He and a friend's younger grandson were both enthralled with this - probably the colors and the cadence of our voices as we read. Flash forward a few months and I'm visiting him. He's just learning to say a few words, loves to sing and to be read to. We're singing the alphabet song and suddenly he says "Boom! Boom!". He hasn't seen Chicka Chicka Boom Boom for months but when I say "A told B and B told C … I'll meet you at the top of the coconut tree. Chicka! Chicka! Boom! Boom!" his eyes lit up and he vigorously nodded yes. My daughter and I had to recite as much of the book over and over from memory as we could. I quickly purchased another copy for him to keep at his house!
Read more
4 people found this helpful
Report abuse

Jayne
5.0 out of 5 stars Different and fun
Reviewed in the United Kingdom on 20 September 2019
Verified Purchase
I bought this book based on reviews. On my first read I wasn't very impressed. However, it has really grown on all the family and I now LOVE reading/singing this book - as do both my one year old and three year.
Read more
3 people found this helpful
Report abuse

Mumbo No
5.0 out of 5 stars My son is addicted!
Reviewed in the United Kingdom on 21 April 2015
Verified Purchase
I bought this for my newborn based on the good reviews (and my love for 'Brown Bear' by Bill Martin Jr.) and really only brought it out when he was about 14 months. Sometimes we have to hide the book because he will want to read it over and over and over again; he enjoys lots of books and so the fact this is his favourite is praise indeed. I really like the bold illustrations and musical rhythm, plus the educational element of the alphabet and day/night. As a Brit, I'd say it's worth noting, there are a few bits of text that won't rhyme if you pronounce 'zed' instead of 'zee' and 'aunt' instead of 'ant' but this doesn't detract from the enjoyment of this book.
Read more
8 people found this helpful
Report abuse

Laura Elizabeth Ewing
5.0 out of 5 stars A much-loved book
Reviewed in the United Kingdom on 13 October 2019
Verified Purchase
My son loves the rhythm and rhyme of this book. Not a book I grew up with, but I enjoy reading this to him.
Read more
One person found this helpful
Report abuse
See all reviews
Back to top
Get to Know Us
Connect with Us
Make Money with Us
Let Us Help You
EnglishChoose a language for shopping.
© 1996-2021, Amazon.com, Inc. or its affiliates