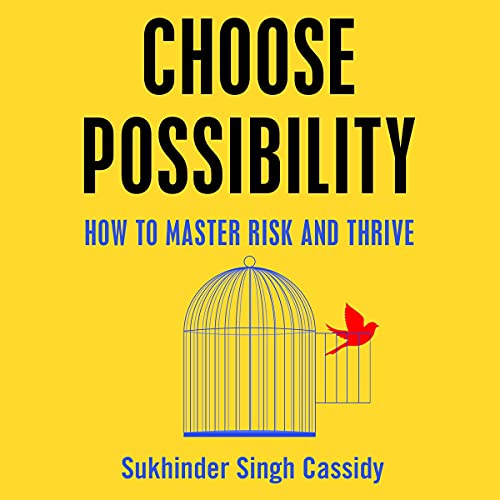 Choose Possibility: How to Master Risk and Thrive

Sukhinder Singh Cassidy (Author, Narrator), Macmillan (Publisher)
4.4 out of 5 stars 16 ratings
See all formats and editions
Sorry, there was a problem loading this page. Try again.

Learn how to take risks, thrive and build your dream career.

Each one of us dreams of possibility - in our careers and in our personal lives. But our pursuit of possibility is hamstrung by the myth of the single choice, which has led us to believe that one large choice stands between us and success, and that a single failure may topple us should we choose ‘wrongly’. Influenced by this myth, we let fear trump possibility: we become paralysed.

Sukhinder Singh Cassidy is one of the most highly regarded and well-respected tech executives in Silicon Valley, but she’ll be the first to admit that her path to success has been far from linear. While she has started three companies including theBoardlist (an organisation designed to promote and place women on corporate boards), and she just served as president of StubHub, which sold for four billion dollars, she’s also encountered failed choices, misfires, unexpected headwinds and all other types of pitfalls that she had to learn how to confront, analyse, navigate and incorporate into her new path forward.

Drawing on her own experience and those of other leaders, Sukhinder shows that when people thrive, it’s because their fear of missing out on an opportunity (FOMO) overtakes their fear of failure (FOF) and compels them to take action. Better yet, they keep acting, building a fundamental risk-taking muscle that underweighs the importance of any single choice in favour of continually ‘choosing’. In Choose Possibility, you will see that personal success does not come from making one singular ‘correct’ or ‘big’ decision. Rather, long-range success comes from tackling numerous choices that are aimed to optimise future possibilities.

PLEASE NOTE: When you purchase this title, the accompanying PDF will be available in your Audible Library along with the audio.

4.4 out of 5 stars
4.4 out of 5
16 global ratings
How are ratings calculated?
To calculate the overall star rating and percentage breakdown by star, we don’t use a simple average. Instead, our system considers things like how recent a review is and if the reviewer bought the item on Amazon. It also analyses reviews to verify trustworthiness.
Top reviews

Always Young
5.0 out of 5 stars great book to help you reflect on your career and decide on the next steps
Reviewed in the United Kingdom on 10 October 2021
Verified Purchase
I really liked the book. There are plenty of instantly applicable insights for anyone at any career point. Great examples from her and other people she met/ worked with careers.

I would highly recommend this book to everyone to help to reflect on their careers and the choices they want to make.
Read more

5.0 out of 5 stars great book to help you reflect on your career and decide on the next steps
Reviewed in the United Kingdom on 10 October 2021
I really liked the book. There are plenty of instantly applicable insights for anyone at any career point. Great examples from her and other people she met/ worked with careers.

I would highly recommend this book to everyone to help to reflect on their careers and the choices they want to make.

Jonathan Rosenberg (Author Trillion Dollar Coach and How Google Works)
5.0 out of 5 stars Terrific read for anyone but especially young people navigating the path to their career goals
Reviewed in the United States on 26 August 2021
Verified Purchase
Sukhinder's "Choose Possibility" is an absolutely terrific read and sheds clear light on how to apply an aggressive and proactively informed approach to making decisions and taking risks as one navigates his/her career. Readers will enjoy the concrete examples that Sukhinder provides as she navigated the maelstrom of challenges building a tech career in Silicon Valley. The messages will resonate with anyone who gets stuck or is held back by fear of making a decision. So many people I have worked with and coached get mired down when they focus on circumnavigating failure and it leads them to take fewer chances. This book will show you that you make your own luck and serendipity requires choosing possibilities and constantly moving forward. At Google we often preach that teams should fail fast and then do post mortems. Sukhinder puts that advice into digestible examples that will help you succeed in the long run and convert inaction into a "Grow or Go" mentality. Success is about inching your way and leaping your way towards your goals. No perfect plan will get you there but rather cyclical efforts that constantly renew as the world, life and opportunities change. Most importantly, Sukhinder walks the talk not only in sharing the path from her own career but in illuminating a path for others. The most powerful people are those who help power flow to others and Sukhinder's work demonstrates that principle. More power to Sukhinder and thanks to Sukhinder and this book, more power to you!
Read more
2 people found this helpful
Report abuse

Trish G
5.0 out of 5 stars Great book on risk, growth, and the choices we face in our careers
Reviewed in the United States on 24 August 2021
Verified Purchase
Have you ever been stuck at a crossroads unable to decide which path to take? Or so worried about making the "wrong" choice, you stayed with the status quo? Or had a career decision or job not go as planned and had feelings of regret looping over and over in your head? Or wanted proof that no one single choice or imperfect plan would define you? If you answered "yes" to any of those questions, or if not, and you're just interested in a great book on the topic of risk, Choose Possibility is a must-read.

The advice and opportunities for self-reflection in Choose Possibility are relevant and actionable regardless of your industry, geography, or where you are in your career. And the style with which Sukhinder Singh Cassidy writes is approachable and interesting - one of the few career-related books I didn't want to put down until I got to the end.
Read more
One person found this helpful
Report abuse

Anne
5.0 out of 5 stars Great Read for those Entering the Workforce or Early in their Careers
Reviewed in the United States on 18 August 2021
Verified Purchase
I very much enjoyed this book. I love the idea that it's helpful to really understand what the "cost" will be of *not* taking a chance by knocking on doors. The true cost of applying for a job opportunity and not getting it is often just personal time and some pride, although we tend to overweight our fear of rejection up front. The upside of applying can be much greater and persistence pays off. Sukhinder Singh Cassidy brings thoughtful examples and anecdotes that help to ground the frameworks introduced in the book. I hope my kids will read this book in the future when they look for their first (and second...) jobs -- reminding them of the values of casting a wide net, not being afraid of rejection, and putting oneself in the right environments to connect with opportunities are all critical. This book has many positive messages that are great for those joining the workforce, are early in their careers, or are ready for greater challenges!
Read more
Report abuse
See all reviews
Back to top
Get to Know Us
Connect with Us
Make Money with Us
Let Us Help You
EnglishChoose a language for shopping.
© 1996-2022, Amazon.com, Inc. or its affiliates