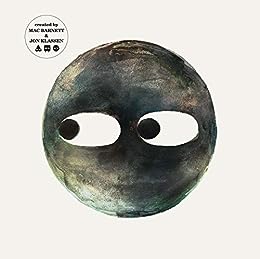 With each shapes outing Klassen outdoes himself on doing much with little; in this case, the succession of spreads that go from gloomy to inky black, with only eyes to represent the characters, sets a high-water mark of minimalism that will be hard to beat but that works effortlessly and comedically within context. The book concludes by inviting the audience to join the shape friends in imagining what the being in the cave could be. That suggestion, issued with a light touch, moves deftly on from the story’s summation without breaking the mood, so even kids resistant to more didactic entreaties may be enticed to join the characters as they wonder.
—Bulletin of the Center for Children's Books (starred review)

Square and Triangle have had their turns. Now, in the final volume of Barnett and Klassen’s shapes trilogy, Circle’s the hero...Circle’s story offers a moment of genuine fright; watching Circle consider other possibilities reminds readers that calm analysis can master fear.
—Publishers Weekly

Illustrator Klassen's watercolor, graphite, and digitally created illustrations are evocative in their muted palette and spare presentation...the implied message of the story is a vital one in this xenophobic age and its subtle delivery and imagery encourage further exploration.
—Kirkus Reviews

In typical Barnett-Klassen style, humor and light philosophical musings mingle to form a story that will entertain children and adults alike. Because much of the story takes place in darkness, readers are called upon to use their imaginations, making this oddball friendship tale an off-kilter treat...If you don't order extra copies of this dynamic duo's latest, their fans will get bent out of shape.
—Booklist

...the message is highly entertaining in its delivery, and Klassen’s understated work with light (and the absence of it), shadow, and texture carries the story full…circle.
—The Horn Book

Klassen paints a wonderfully mysterious backdrop of waterfall, concealing a dark cave behind it. His simple shapes with their stick legs and expressive eyes are full of personality. Barnett's subtle, witty text pokes gentle fun at the friends' foibles and fears in a way sure to appeal to children in the target age group.
—Buffalo News

Like Square and Triangle, Circle teaches shapes while challenging kids to think, in this case, about what they know and don't know.
—Northwest Arkansas Democrat Gazette

Offer[s] young readers plenty of opportunity to read their own ideas into the story, flex their imagination, and explore their own fear of the unfamiliar.
—New York Journal of Books

An elegant picturebook in which simple shapes and succinct story express big ideas. Here a game of hide-and-seek makes us consider, for starters, fear of strangers, the power of the imagination, being brave and standing by friends.
—The Sunday Times --This text refers to an out of print or unavailable edition of this title.

4.8 out of 5 stars
4.8 out of 5
618 global ratings
How are ratings calculated?
To calculate the overall star rating and percentage breakdown by star, we don’t use a simple average. Instead, our system considers things like how recent a review is and if the reviewer bought the item on Amazon. It also analyses reviews to verify trustworthiness.
Top reviews

millicentlyd
5.0 out of 5 stars Adored.
Reviewed in the United Kingdom on 28 March 2019
Verified Purchase
I thought that for a review I would just copy my daughter's email about our 4-year-old twins who already have and are obsessed with*Triangle* and *Square*: **Just to say that the boys were in ecstasies over the circle book and talked about it for a good half hour after lights out! X" Sent from my iPhone. ** I think that says it all. These books have transformed reading for these little ones.
Read more
4 people found this helpful
Report abuse

Q
5.0 out of 5 stars Another great shape book
Reviewed in the United Kingdom on 27 April 2019
Verified Purchase
We were delighted with the arrival of this book at nursery. My class counted down the days until it came. They love the humour of these stories. This one is great fun and has a bit of mystery and ideas to think about, as do the previous two books. My class would like to have even more of these, so we’re hoping for some more shape books in the future. These are great books, we adore the illustrations and with a bit of adult support the children can totally engage with the story.
Read more
One person found this helpful
Report abuse

Mr. D. Stewart
4.0 out of 5 stars Still got its mojo!
Reviewed in the United Kingdom on 9 March 2019
Verified Purchase
Book three in the series and still going well! 4 stars as a comparative measurement really, as its not quite to the standard of the two earlier stories: mind you, I might have given those two six stars were that possible! One of my wee ones is convinced that "rectangle" must be the next in line - as you'll see once you read it, that's not a given...
Read more
One person found this helpful
Report abuse

Vicki Broadbent
5.0 out of 5 stars Super read
Reviewed in the United Kingdom on 1 November 2020
Verified Purchase
Engaging and funny, my son has read and re-read all of the series, time and time again!
Read more
Report abuse

sproggy
5.0 out of 5 stars Amazing author
Reviewed in the United Kingdom on 24 July 2020
Verified Purchase
The circle is the best book, but you won't know that unless you read all 3 of the shapes. And so you should - amazing stories!
Read more
Report abuse
See all reviews
Back to top
Get to Know Us
Connect with Us
Make Money with Us
Let Us Help You
EnglishChoose a language for shopping.
© 1996-2021, Amazon.com, Inc. or its affiliates