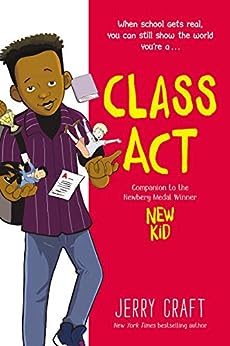 "Craft again produces a funny and appealing yet sensitive and nuanced middle grade tale of inequity and microaggressions."

"[A] visually rich, truth-telling tale for our troubled times that affirms the eternal importance of friends."

"Craft makes the story honest and believable and presents it as a powerful, if difficult to achieve, real-world possibility. Another work of resounding understanding and empathy."

-- "Booklist (starred review)" --This text refers to the audioCD edition.

Jerry Craft is the winner of the Newbery Medal for his graphic novel New Kid. He has worked on numerous picture books, graphic novels, and middle grade novels. Jerry is the creator of Mama's Boyz, an award-winning syndicated comic strip. He has won five African American Literary Awards, and he is a cofounder of the Schomburg Center's Annual Black Comic Book Festival. He received his BFA from the School of Visual Arts and now lives in Connecticut. Visit him online at www.jerrycraft.com.

Soneela Nankani, an Earphones Award-winning narrator, is a classically trained actress, voice-over artist, and singer who has had roles in film and on television. She has worked with the award-winning Sojourn Theatre, Classical Theatre of Harlem, the Oregon Shakespeare Festival, and the Kansas City Repertory Theatre.

Phoebe Strole is an actress and an Earphones Award-winning narrator who was a finalist in 2014 for the prestigious Audie Award for best narration. She graduated from New York University's Tisch School of the Arts with a BFA in drama. She has appeared on Broadway in Spring Awakening and in various films and television series, including Hamlet 2, 30 Rock, Glee, and Rescue Me.

Robin Miles, named a Golden Voice by AudioFile magazine, has twice won the prestigious Audie Award for Best Narration, an Audie Award for directing, and many Earphones Awards. Her film and television acting credits include The Last Days of Disco, Primary Colors, Law & Order: Criminal Intent, Law & Order, New York Undercover, National Geographic's Tales from the Wild, All My Children, and One Life to Live. She regularly gives seminars to members of SAG and AFTRA actors' unions, and in 2005 she started Narration Arts Workshop in New York City, offering audiobook recording classes and coaching. She holds a BA degree in theater studies from Yale University, an MFA in acting from the Yale School of Drama, and a certificate from the British American Drama Academy in England.

Dan Bittner is an actor and voice talent and winner of several AudioFile Earphones Awards for audio narration. He has starred on stage and on the screen, in movies such as Men in Black, Adventureland, and the Producers: The Movie Musical. He has also appeared onstage as Macbeth and Sherlock Holmes in the Edinburgh Fringe Festival.

4.9 out of 5 stars
4.9 out of 5
1,337 global ratings
How are ratings calculated?
To calculate the overall star rating and percentage breakdown by star, we don’t use a simple average. Instead, our system considers things like how recent a review is and if the reviewer bought the item on Amazon. It also analyses reviews to verify trustworthiness.
Top reviews

Gareth M. Hurley
1.0 out of 5 stars Beware condition of item.
Reviewed in the United Kingdom on 10 March 2021
Verified Purchase
Bought as gift. But condition is poor.
Disappointing and it seems no refund possible.
Read more

1.0 out of 5 stars Beware condition of item.
Reviewed in the United Kingdom on 10 March 2021
Bought as gift. But condition is poor.
Disappointing and it seems no refund possible.

J. W
5.0 out of 5 stars Yep. This is as good as his first book.
Reviewed in Canada on 28 May 2021
Verified Purchase
Awesome sequel to New Kid. Jerry craft has done it again. Got this book for my class and it is in high demand. His subtle jokes and funny pictures has students reading this and rereading this to catch it all. If you bought new kid. Buy this. As good as the first.
Read more
Report abuse

Lucy Loo
5.0 out of 5 stars Awesome Books
Reviewed in Canada on 11 January 2021
Verified Purchase
I try to buy books that provide my son with some diverse characters, and circumstances different than his own. This book and the other series are really well done. Engaging, and raise some important issues in a way he finds interesting. He was 9 when he read book 1, and just turned 10 when we got boom 2. He had re-read each multiple times.
Read more
Report abuse

JenP
4.0 out of 5 stars Great follow up to New Kid
Reviewed in the United States on 19 November 2020
Verified Purchase
This is the follow up book to Craft's "New Kid". This story centers around Drew, whose Grandmother has always told him that he will have to work "twice as hard to be half as good". He goes to the privledged school of Riverdale Academy, but he isn't privledged himself. He attends the academy on an academic scholarship and isn't sure how he fits in among his peers.

He is invited to his friend Liam's house for the day and finds out how wealthy his friend really is. This puts a strain on their friendship and their mutual friend Jordan tries to figure out a way to bring them back together.

My daughter and I have been really enjoying reading this middle grade graphic novels together. We enjoyed "New Kids" quite a bit, so when we discovered this book on an outing the other day, we had to have it. IT was just as good as Craft's first novel. It has a nice message, some good humor, and some good talking points. I hope he continues to write more, because we are now fans.

Amazon Customer
5.0 out of 5 stars Wonderful Author
Reviewed in the United States on 15 March 2021
Verified Purchase
My son is 12 and not an avid reader. In fact, he hates reading. Sadly, his school library does not have any books with African American illustrated characters. I wanted to find something relatable for him. I also wanted to find a book he would read to help with his Accelerated Reader points. He read this fast and shared it with a classmate when he was done. I have since purchased all books by this author and he read them all! Highly recommended!
Read more
5 people found this helpful
Report abuse
See all reviews
Back to top
Get to Know Us
Connect with Us
Make Money with Us
Let Us Help You
EnglishChoose a language for shopping.
© 1996-2021, Amazon.com, Inc. or its affiliates