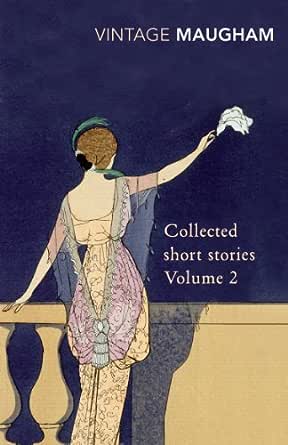 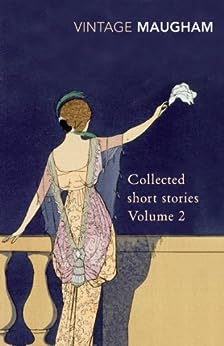 WILLIAM SOMERSET MAUGHAM, (1874 - 1965), novelist, playwright, short-story writer, and the highest paid author in the world in the 1930’s, nevertheless failed to gain the critical acclaim he so desperately wanted during his lifetime. "I have never pretended to be anything but a story teller. It has amused me to tell stories and I have told a great many. It is a misfortune for me that the telling of a story just for the sake of the story is not an activity that is in favor with the intelligentsia. I endeavor to bear my misfortunes with fortitude," he wrote. Today, he is considered one of the finest short story writers who ever lived.

NARRATOR CHARLTON GRIFFIN is one of the great readers of our time. His classical theatre training combined with his wonderful, incisive interpretations of great literature make him a unique talent. Mr.Griffin's vocal performance is vibrant, soothing, compelling, and hypnotic. He is the recipient of the Audie Award for Classic Fiction. --This text refers to the cassette edition.

No one who relishes the little ironies of life can fail to appreciate this second audio collection of Maugham's short stories. It takes us on a strange journey to far worlds where we meet unusual people: the executioner in a French penal colony; a lonely Englishman on a South Sea island; a wealthy baron who is happier defying his parents, living the life of a Jewish musician. Charlton Griffin narrates with the ease of an urbane man of the world, but recreates Maugham's strange characters with pleasure and gusto. While his narrative voice is graceful and compelling, his characterizations are acutely individual, even bizarre. Their voices linger in our memory long after the tape is off. Combined with an appropriate musical score and sound effects, this is a thoroughly satisfying package. P.E.F. © AudioFile 2002, Portland, Maine-- Copyright © AudioFile, Portland, Maine --This text refers to the cassette edition.

As clever a craftsman as the cleverest ― Observer --This text refers to the paperback edition.

The stories in this collection move from Malaya to the U.S. to England and include some of Maugham?s most famous tales: ?Flotsam and Jetsam,? the story of an old woman trapped for years in a loveless marriage in the remote rubber plantations; ?The Man with the Scar,? and notably the opening story ?The Vessel of Wrath,? a tale of the unexpected love between a devout missionary nurse and a drunken reprobate. --This text refers to the paperback edition.
Read more

4.5 out of 5 stars
4.5 out of 5
84 global ratings
How are ratings calculated?
To calculate the overall star rating and percentage breakdown by star, we don’t use a simple average. Instead, our system considers things like how recent a review is and if the reviewer bought the item on Amazon. It also analyses reviews to verify trustworthiness.

SD
1.0 out of 5 stars old copy
Reviewed in India on 27 July 2020
Verified Purchase
received such an old worn-out book. the pages are all discoloured. Had ordered as a gift but cant give this, looks like a second hand copy. Very disappointed
Read more

1.0 out of 5 stars old copy
By SD on 27 July 2020
received such an old worn-out book. the pages are all discoloured. Had ordered as a gift but cant give this, looks like a second hand copy. Very disappointed
Images in this review

Violet in Mist
5.0 out of 5 stars Five Stars
Reviewed in India on 22 January 2015
Verified Purchase
The real vintage classic with masterpieces like Man With a scar and other stories....
Read more
Helpful
Report abuse

Wiz
5.0 out of 5 stars For me, the greatest!
Reviewed in the United Kingdom on 6 March 2020
Verified Purchase
There is no author I have enjoyed more in my life. I have read and re-read his short stories many times. It was Somerset Maugham who brought me back to reading after my school days were over.

I remember buying a paperback copy of his short stories as a random choice, I knew nothing about the author or his stories, just that they were short and I could read them whilst eating a sandwich at my desk during my lunch break. I was possibly 17 or 18 at the time.

I also remember finding the first story to be far too long for me and over many lunchtimes I read a few pages and never got to the end of it. I used to keep it in the bottom drawer of my desk and I left it in there for months and months unread after the first 30 or so pages, not even finishing the first story.

Fast forward a year or more and fed up of reading airline timetables or hotel brochures or the side of the salt container, I rediscovered Somerset Maugham's short story collection in the bottom drawer and reluctantly tried a few pages.

Oh how my heart sang, the words and sentences were all different than before. Somehow the slow baking that happens in a bottom drawer had transformed the book, the words were all rearranged, they meant something to me. The drawer had turned the book into a masterpiece!

That was possibly 45 years ago, I try to read at least 30 minutes everyday for pleasure.

Oh my goodness, I owe so much to W Somerset Maugham, bless you!

Amazon Customer
3.0 out of 5 stars Fairly interesting, but a little laboured
Reviewed in the United Kingdom on 7 April 2021
Verified Purchase
A reasonably enjoyable read, but not particularly scintillating
Read more
Report abuse

janet fowell
4.0 out of 5 stars Good service
Reviewed in the United Kingdom on 29 January 2021
Verified Purchase
The service was good I received the book within just a few days.
Unfortunately I had read these stories before, but that was my fault lol.
Read more

4.0 out of 5 stars Good service
Reviewed in the United Kingdom on 29 January 2021
The service was good I received the book within just a few days.
Unfortunately I had read these stories before, but that was my fault lol.

Teddy Leicester
5.0 out of 5 stars Such insightful stories.
Reviewed in the United Kingdom on 3 July 2015
Verified Purchase
Somerset Maugham's stories capture a lost world. Read them and be astonished by his insightful observance and his knack of creating a world now long gone.
Read more
2 people found this helpful
Report abuse
See all reviews
Back to top
Get to Know Us
Connect with Us
Make Money with Us
Let Us Help You
EnglishChoose a language for shopping.
© 1996-2021, Amazon.com, Inc. or its affiliates