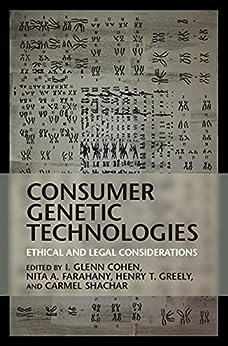 by I. Glenn Cohen (Editor), Nita A. Farahany (Editor), Henry T. Greely (Editor), Carmel Shachar (Editor) & 1 More Format: Kindle Edition
See all formats and editions
Sorry, there was a problem loading this page. Try again.
For the average person, genetic testing has two very different faces. The rise of genetic testing is often promoted as the democratization of genetics by enabling individuals to gain insights into their unique makeup. At the same time, many have raised concerns that genetic testing and sequencing reveal intensely personal and private information. As these technologies become increasingly available as consumer products, the ethical, legal, and regulatory challenges presented by genomics are ever looming. Assembling multidisciplinary experts, this volume evaluates the different models used to deliver consumer genetics and considers a number of key questions: How should we mediate privacy and other ethical concerns around genetic databases? Does aggregating data from genetic testing turn people into products by commercializing their data? How might this data reduce or exacerbate existing healthcare disparities? Contributing authors also provide guidance on protecting consumer privacy and safety while promoting innovation.
Read more
Previous page
Next page

I. Glenn Cohen is the James A. Attwood and Leslie Williams Professor of Law at Harvard Law School. He is one of the world's leading experts on the intersection of bioethics and the law, as well as health law. He is the author of more than 150 articles in venues like the New England Journal of Medicine, JAMA, Science and the Harvard Law Review, and the author, editor, or co-editor of 15 books. He has appeared on or been covered by media outlets such as PBS, NPR, ABC, CNN, MSNBC, the New York Times, and the Boston Globe. Professor Cohen has also been a Radcliffe Institute and Hastings Center Fellow.

Nita A. Farahany is Distinguished Professor of Law and Philosophy at Duke University. She is a widely published scholar on the ethical, legal, and social implications of the biosciences and emerging technologies, and a frequent commentator at international conferences including the Aspen Ideas Festival, TED, and the World Economic Forum.

Henry T. Greely is the Deane F. and Kate Edelman Johnson Professor of Law at Stanford University where he specializes in ethical, legal, and social issues arising from the biosciences. He is the author of The End of Sex and the Future of Human Reproduction (2016) and CRISPR People: The Science and Ethics of Editing Humans (2021).

Carmel Shachar is the Executive Director of the Petrie-Flom Center at Harvard Law School. Her work focuses on access to care and digital health. She is the co-editor of several other volumes including Transparency in Health Care and Disability, Law, Health, and Bioethics. --This text refers to the paperback edition.