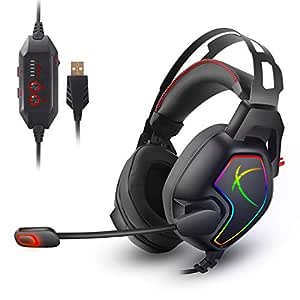 Go Pro with your gaming Audio sporting the Equinox Europa Gaming Headset on your ears! Set yourself apart with the stunning and unique Spectra RGB Software Controlled LED Lighting!

HD Quality Audio, made possible with Dual Drivers and Surround Sound Effects with an Equalizer - giving you multiple game play options, pulling your mind deeper into the game.

The Equinox Europa is aptly equipped with a braided cable to take on all those gaming twists and turns whilst enabling flawless control with the On-Cable Controller and USB Interface.

Please note that mobile sound quality and volume depends on the USB power output of the phone. We recommend using the headphone on PC for best performance.

4.0 out of 5 stars
4 out of 5
105 customer ratings
How does Amazon calculate star ratings?
Amazon calculates a product's star ratings based on a machine learned model instead of a raw data average. The model takes into account factors including the age of a rating, whether the ratings are from verified purchasers and factors that establish reviewer trustworthiness.

ankit
4.0 out of 5 stars Go for it best product
Reviewed in India on 23 October 2019
Verified Purchase
Product is fine best quality better then hyperX because hyperx chage you more then cosmic byte for the same quality you can see the review of this product on youtube search the same name on youtube
Read more

ALucard
3.0 out of 5 stars Average
Reviewed in India on 4 November 2019
Verified Purchase
I purchased this pair because my old HyperX cloud core stopped working and I was a bit low on budget. Upon reading the reviews and specs, I decided to go for it since it was a no brainer at 1899/-

1.Overall sound quality is good, there is a little too much bass at times.
2. RGB ligthting is awesome.
3. The inline controller is a bit quirky and doesnt work as expected always. It also heats up a lot.
4. Wire length is very less for a PC, but I like that its braided.
5. The software (driver) is literally pathetic. Looks like a school student coded it as a summer project. So you can expect the quality.
6. There is no 7.1 sound on this one, its virtualised and it doesnt sound great at all. I just plug it in with default settings and that's good enough for me.

All in all, its good for the price, with the rgb lighting and sound quality. Cant say anything about its durability right now but it looks kinda robust.

Vishal Sukhwani
5.0 out of 5 stars Best of all!
Reviewed in India on 27 October 2019
Verified Purchase
Best gaming headphone, nothing negative, go and direct order this, got it for Rs. 1700 in sale. Luv u all!
Read more

Pushendu Chauhan
4.0 out of 5 stars Not Exactly a core gaming headphone
Reviewed in India on 7 March 2020
Verified Purchase
This headset is good for listening to Music and it have USB connectivity only, which means you cannot connect to mobile phones. TV etc devices which support 3.5mm jack.

For gaming, this headphone is semi-recommended, the base is quiet descent, high frequency are hard to hear, i was unable to catch above 15khz frequency every time i tested.

I listen to music and play games like Dota 2, Rust, The Crew, GTA Online and many more where this headphone is fine, but i tested in CS GO and CS 1.6 where this headphone failed to deliver sharp foot steps, instead the base is making the gun fire or foot steps sound very base filled, irritrating your brain and ears, for certain games, tweaking the equalizer is suggested.

There will be few drawbacks like, you cant carry it everywhere if you don't have a computer to plug.
The headphone may make ur ears hurt after long use, in certain cases, or you might get used to it soon.
Sweating will happen in summer, even after sitting in AC room because the ears are fully covered.
Sometimes after long use, it might make your neck tired because of the weight.

Some FACTS,
The sound driver used is C-Media Audio System.
This headphone Cosmic Byte Equinox Europa is exactly same like YOTMS Y2 Gaming Headset. Kotion is also based on same C Media Audio and YOTMS too.

These are similar headphones with just different logo.

This headphone will basically not disappoint but if you are hardcore gamer, go for Sony Earphones, they are one of best for gaming where you need to hear footsteps a lot, like CS GO, Pubg.
Thanks
Read more
One person found this helpful
Helpful
Comment Report abuse

Arraya Kumar
4.0 out of 5 stars Best budget 7.1 Sound System till now.
Reviewed in India on 30 January 2020
Verified Purchase
First of all Thank YouEQUINOX for launching an affordable 7.1 Gaming headphone. Now talking about the sound and build quality, the sound quality is awesome if you compare it with other headphone in this price segment. The Bass, Mids and High are equally balance thus giving you a warm and soothing sound. Most Indians like bass so if you are a bass lover you should know that it won't give you over your head bass but you'll get a smooth thumping bass, you can feel the vibration in your ears without any distortion. You get a dual EQ too, normal mode and bass mode. The sound does feel different but not that much. Impressive bass tho with the right EQ settings.
If you want a very loud headphone then you won't be satisfied, I was surprised when I could still listen some songs even when both my phone and headphone volume was at 100%. I secretly wish they increase the loudness a little bit more but I'm equally satisfied.
Now about the noise cancellation considering it is in the ear headphone and not over the ear it is quite impressive.
The call quality is okay. Nothing impressive or nothing bad. The other side can hear me clearly and I too can hear the caller voice clearly.
Read more
One person found this helpful
Helpful
Comment Report abuse

Prathamesh Dolaskar
5.0 out of 5 stars Cosmic I s my life
Reviewed in India on 2 February 2020
Verified Purchase
Firstly I was also confuse which product want to buy mean Redgear Cosmo 7.1 or Cosmic Byte Equinox .... Soo I. Had finally decided to buy this I am buy ......
It is a decent product you can't imagine how much it is because when you touch this product then you realise how much good it is.....LOVE YOU COSMIC BYTE