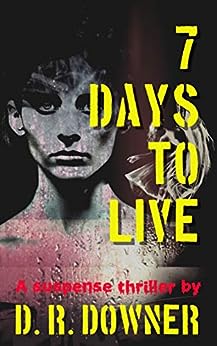 7 Days To Live: The numbers will kill you Kindle Edition

4.9 out of 5 stars
4.9 out of 5
9 global ratings
How are ratings calculated?
To calculate the overall star rating and percentage breakdown by star, we don’t use a simple average. Instead, our system considers things like how recent a review is and if the reviewer bought the item on Amazon. It also analyses reviews to verify trustworthiness.
Top reviews

@DJReviews
5.0 out of 5 stars Brilliant read - fast-paced and stunning!
Reviewed in India on 1 May 2019
Verified Purchase
Sometimes one stumbles upon a book or an author by chance. That's what happened to me when I bought this book to read. Having read 'The Secrets of Ghostwriting' from D R Downer, I also wanted to read one of his fiction. Thus started my journey with thrillers. What happens when a person knows he's going to die in 7 days? How will he trace the potential killer? These are the questions that pop up as one devours the pages. This book is brilliant with respect to the pace, the story telling, and the way the climax has been written. Maintaining suspense for readers in a non-visual medium is no mean feat; and D R Downer has mastered it. All in all, a great read, definitely deserves a five-star rating.
Read more
One person found this helpful
Helpful
Report abuse

Amazon customer
5.0 out of 5 stars Unputdownable
Reviewed in India on 18 September 2018
Verified Purchase
This is the story of Peter who had walked away from a strict father and a lower-middle-class family to fulfill his dreams. His father, while he was alive, never expressed his love for Peter, one of the primary reasons why he walked away from his family. Now that he was successful in life, he suddenly receives a message from his mother that his father was dead.
When he reaches his family home, he finds out that his father left a series of letters to him. It is evident from his letters that he loved Peter very much. This makes Peter sad and guilty that he never reconciled with his father while he was alive.
But he brings his mother back to his home, and they find happiness together when he suddenly receives a series of letters in code, which when decoded, tells him that he has just seven more days to live. Who is sending these threatening letters? Does he find out in time? Or did fate win, and he ended up dead on the seventh day, just as predicted?

This is a short and unputdownable thriller. I loved it. But at the same time, it brought tears to my eyes. Highly recommended.
Read more
One person found this helpful
Helpful
Report abuse

Aparna Nayak
5.0 out of 5 stars Unputdownable...a must read
Reviewed in India on 2 October 2018
Verified Purchase
7 days to live is a short story of an estranged son Peter who had differences with his father. But after whose demise, he realizes his folly of abandoning him and not being with him when he needed Peter the most.

This is the author's second book which I have read and I really loved his unique writing style. Fast-paced, flawless writing and unique story are all the plus points of this book. Minus points, if you ask, are none.

Looking forward to reading more works from the author.

So if you wanna read a short and fast-paced suspenseful story, this one is definitely a must read.
Read more
One person found this helpful
Helpful
Report abuse

Madhur Mehta
5.0 out of 5 stars Interesting
Reviewed in India on 5 June 2020
Verified Purchase
This story was fast paced, interesting, keeps the reader on their toes and is pretty well written. Would recommend to everyone.
Read more
Helpful
Report abuse

THELIP
4.0 out of 5 stars 7 Days To Live Or Shall The Numbers Get You By Then?
Reviewed in India on 3 September 2018
There Is Always Something Refreshingly Different & Unique In D R Downer’s Short Story Books. What Makes Him Stand Apart Is That He Does Not Hesitate To Experiment In Each Of His Tales Giving A Fresh Feel To The Readers.
This Time Around His Experiments Take The Reader On A Joyride As He Relies Heavily On Translations From Hindi To English Making It Equally Comfortable For Readers From Both Sides Of The Spectrum..It’s Anyday, Far Better Than Poorly Translated Subtitles By A Third Party That Mostly Fail To Retain The Essence Of What The Author Wants To Convey. Thus It Coming Directly From The Author Himself Is Not Short Of Godsend!!!
7 Days To Live Grabs Your Immediate Attention Right From The Very Start And There Is Absolutely No Letting Go Right Till The Very End As The Curtain Comes Down On This Edge Of The Seat Whodunnit Thriller.
The Fact That Till The Very End The Needle Of Suspicion Does Not Point Towards Any Suspect Who Is Most Likely To Benefit From This Crime Thus Keeps All Options Open On Who Would Want To Kill The Protagonist & More Importantly Why?
All Said & Done The Author D.R. Downer Does Not Disappoint This Time Too Living Up To The Expectations Of His Loyal Readers..Truly Indeed This Book Makes Compelling Reading!!!
Just Cannot Wait To Pick Up The Authors Next Offering To Be Reassured That It Shall Complete The 🎩 Trick Of Excellence In His Writings!!!
Read more
One person found this helpful
Helpful
Report abuse

Kavita R
5.0 out of 5 stars Loved it!!
Reviewed in India on 21 August 2018
Loved it!! A story that hooks you at the beginning and takes you into it!! An experience I dont regret but cherish. Having read all the kindle shorts by the author am now waiting to read a longer work by him.
Read more
2 people found this helpful
Helpful
Report abuse

Sakshi Singh
5.0 out of 5 stars Good Read on the Go!
Reviewed in India on 25 August 2018
Another interesting piece by author D. R. Downer. Now everytime I travel short distances, i prefer indulging in his books. Hope more of such stories will keep coming.
Read more
One person found this helpful
Helpful
Report abuse
See all reviews

Anneonymous
5.0 out of 5 stars Who? How? Wow! I didn’t see that coming...!
Reviewed in France on 27 October 2018
Verified Purchase
This book is hard to rate without giving away the story. However, if you are a mystery or thriller lover (or just another fellow bibliophile...) there is no way you won’t enjoy it. The protagonist Peter is every bit mysterious as Dr Jekyll and Mr Hyde... and the story intends on keeping you biting your nail!
Read more
Report abuse
See all reviews
Back to top
Get to Know Us
Connect with Us
Make Money with Us
Let Us Help You
EnglishChoose a language for shopping.
© 1996-2021, Amazon.com, Inc. or its affiliates