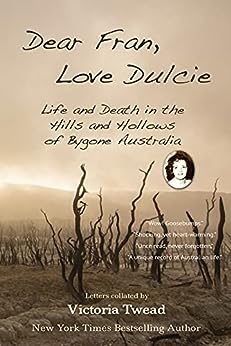 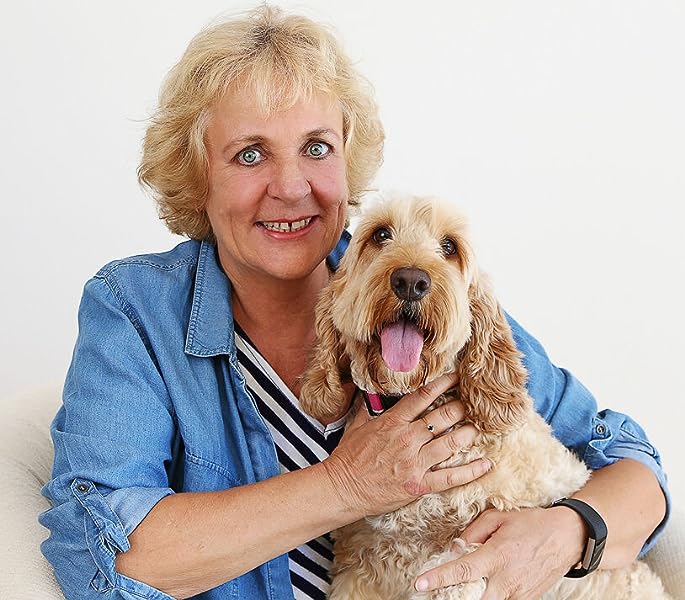 by Victoria Twead (Author) Format: Kindle Edition
See all formats and editions
Sorry, there was a problem loading this page. Try again.

Imagine a true story that unfolds in the harshness of Australia’s outback, beginning in 1957 and spanning decades. Imagine Dulcie’s battle to keep her family and animals alive in spite of bushfires, floods, cyclones, droughts, dingo attacks and terrible accidents.
The story of Dulcie, a simple Queensland pineapple farmer’s wife, has so many twists and turns that it will leave you gasping.

Each book purchased will help support Careflight, an Australian aero-medical charity that attends emergencies, however remote.

Victoria Twead is the New York Times bestselling author of Chickens, Mules and Two Old Fools and the subsequent books in the Old Fools series. After living in a remote mountain village in Spain for eleven years, and owning probably the most dangerous cockerel in Europe, Victoria and Joe retired to Australia. Another joyous life-chapter has begun. Website: www.victoriatwead.com Join her on Facebook at www.facebook.com/VictoriaTwead --This text refers to the paperback edition.

"There are no words that can do this book justice." Julie Haigh, Top 1000 Amazon reviewer.

4.9 out of 5 stars
4.9 out of 5
80 global ratings
How are ratings calculated?
To calculate the overall star rating and percentage breakdown by star, we don’t use a simple average. Instead, our system considers things like how recent a review is and if the reviewer bought the item on Amazon. It also analyses reviews to verify trustworthiness.
Top reviews

Julie Haigh
5.0 out of 5 stars Stunning. I’ve never read anything like it before.
Reviewed in the United Kingdom on 6 July 2021
Verified Purchase
I totally loved this book! It was absolutely wonderful. Not just a few sweet penfriend letters-it is so much more. Some bits are so unexpected, it totally floored me. This is a masterpiece! And I love how Victoria Twead has presented it.

Tells of a pen friend relationship between two girls, Fran and Dulcie, who lived in the USA and Australia. How wonderful that the letters had been kept. There is so much downsizing and decluttering nowadays that many people would just chuck out such treasures as these.

Fran is now 85, and, having read Victoria's 'Two Old Fools Down Under', she had asked Victoria to publish the wonderful stories the letters tell. These weren't school-age penfriends, Fran had been 21, and married with a child when she started corresponding with Dulcie. This is so well done, and a real treat and privilege to read about these ladies' lives.

It tells of laughter and tears, ups and downs; life. History, popular songs and singers of the time are mentioned, so you really get a feel of the times. It really got to my emotions; happy, nostalgic feelings, and sadness at the bad times they face.

Such an exciting opportunity to publish these precious letters. And Victoria Twead has certainly done an excellent job presenting them to us.

A fascinating book. To think all this came from just a penfriend set-up. And the ladies didn't just let it slide, they kept in contact, they shared their experiences, hardships and joys, over many years.

There are no words that can do this justice. Read it. Experience it. Something very special. Stunning. I usually start a new book as soon as I finish one. I couldn’t with this-I just had to sit and think for a bit, it was too important to just gloss past.

A unique piece of history. More than just a book. Something very special and utterly memorable.
I've never read anything like this before. A stand-out book which I’ll never forget.
Read more
2 people found this helpful
Report abuse

Rebecca H
5.0 out of 5 stars A most remarkable book.
Reviewed in the United Kingdom on 9 July 2021
Verified Purchase
Rarely have I read a book that made such an impression on me. It’s quite extraordinary that this story has come to be told. It tells of the life of Dulcie Clarke, a young Australian woman through the letters she wrote to her penfriend Fran, a young American woman living in Detroit. The letters span the decades between the late 1950’s to December 1980 and you can see the close bond between the two women grow through the years as they share details of their lives and thoughts. What an incredibly hard life Dulcie had, enduring tragedy, illness, and the never-ending backbreaking work on their land.
She was practical, stoic and accepting of all that life and nature threw at her. However, despite the harshness of her life, she took an interest in current affairs and I enjoyed reading her comments on fashion, music and even her advice to Fran. Thanks to her pen pal Fran for keeping Dulcie’s letters and recognising their importance. Thanks to Victoria Twead for her painstaking work in transcribing the letters and publishing this book. I defy anyone to read this and not be moved. I can't recommend it highly enough.
Read more
2 people found this helpful
Report abuse

Lorraine Thomas
5.0 out of 5 stars A Fascinating Book
Reviewed in the United Kingdom on 11 July 2021
Verified Purchase
Just finished reading ‘Dear Fran, love Dulce’ by Victoria Twead. I would highly recommend this book as it gives a glimpse into the lives of two women who became pen pals in the 1950s, Fran who lives in USA and Dulce who lived in the Australian Outback. Through Dulcie’s letter to Fran we get a glimpse of her extremely hard life as well as her amazing strength, courage and determination, resilience and resourcefulness. In spite of having to deal with floods, drought and bush fires on annual basis, as well as numerous other assorted problems, she remains strong and continues to be optimistic.
Read more
One person found this helpful
Report abuse

Diana D
5.0 out of 5 stars Incredible
Reviewed in the United Kingdom on 17 August 2021
Verified Purchase
The first letters are quite ordinary, but, my goodness, things soon start to happen! I loved the photos adding to the letters too. I like the fact that Dulcie still continues writing even if she does not hear from Fran for a while. How different her life was from most of us today. A lot is incredibly sad, but it is written in a matter of fact, not a depressing, way. Many things we think are current problems, were actually happening then too. Love the tales of the different animals. Interesting reading comparisons of money, produce etc, and the parcels they sent each other. Thanks for the Epilogue, which is even more extraordinary than the letters themselves.
Read more
Report abuse

Maggie
5.0 out of 5 stars A story that will keep you thinking. Full of the joys and sadness of life.
Reviewed in the United Kingdom on 28 August 2021
Verified Purchase
Fran and Dulcie are penpals and share their lives in letters over many years. This is mostly the story of Dulcie and an extraordinary story it is. I struggled at the beginning but then found the challenges of Dulcies life so compelling I had to keep reading. I found the struggles of the family the sadness they endured difficult to comprehend.
The ending of the book was very much a surprise and I had to think about whether the disclosure changed how I felt about the letters. But I enjoyed reading Dulcie and Frans story and would definitely recommend.
Victoria Twead is one of my favourite writers and she has done a wonderful job sharing this story with us.
Read more
Report abuse
See all reviews

Victoria Twead is the Amazon, New York Times and Wall Street Journal bestselling author of the Old Fools series and works in her pyjamas.

#3 Two Old Fools on a Camel

#6 Two Old Fools Down Under

A is for Abigail

B is for Bella

C is for the Captain

Victoria Twead is the New York Times bestselling author of “Chickens, Mules and Two Old Fools” and the subsequent books in the Old Fools series. After living in a remote mountain village in Spain for 11 years, and owning probably the most dangerous cockerel in Europe, Victoria and Joe retired to Australia where another joyous life-chapter has begun.

Victoria explains how 'Chickens' was hatched:

&quot;I'm famous for my lists and records. I can't help myself; I think I inherited the record-keeping gene from my father. Every day I make a note of the weather, the temperature, the first snowdrop, the day the ants fly, the exchange rate of the euro, everything. I make packing lists, holiday lists, 'To Do' lists and 'Joe, Will You Please' lists. I even make lists of lists. My nickname at work was Schindler.

Also, I have terrible difficulty throwing anything away. I find my heart racing and my fingers clamp possessively on the object in question. After all, a rusty hostess trolley, or broken watch, or a 1996 calendar, or whatever, may come in useful some day... So I rarely delete old emails and have diaries dating back years.

Both these dubious character traits of mine, for a pleasant change, proved really useful and helped 'Chickens' to hatch.

Moving to Spain was undeniably a culture shock. Every new day produced events either hilarious or heart-warming. Food suddenly tasted better, human behaviour was more fascinating, local events more interesting. It was like seeing in colour for the first time, and the book began bubbling in my head.

Of course, Joe often lost patience with me, and rightly so. 'Stop dreaming, and concentrate! Hold that ladder steady or I'm going to break a leg in a minute!' But the book was relentless. As soon as I could, I unearthed all my records, notes, old emails to friends, and began to write.

It's funny where life takes you... When I was a little girl and asked what I wanted to be when I grew up, I always answered, 'A zoo-keeper.' No, I never realised that ambition, but life in Spain has not been that far removed. Okay, I agree, chickens, mules and all the other animals (including humans) I wrote about may not be very exotic. But their behaviour was just as riveting as that of any grizzly bear or meerkat.

As I wrote, the book made me laugh and cry. I love Spain. I love the Spanish people. I love Spanish food. I hope all this shines through in my writing, even when I'm describing some of the less pleasant things that happened to us.&quot;