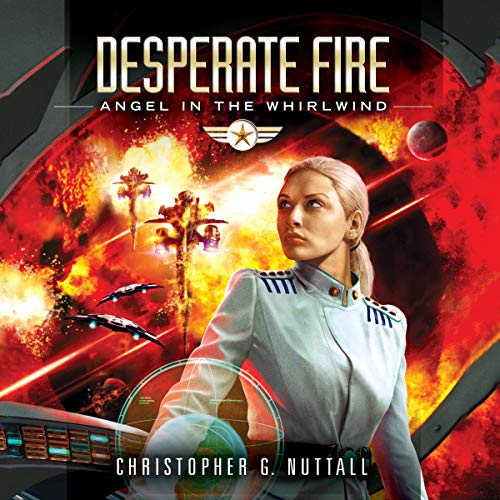 In the fourth and final book in speculative-fiction master Christopher G. Nuttall's Angel in the Whirlwind series, an epic battle pits the survival of hope against the locus of destruction.

As the Commonwealth produces more starships and increases recruits, victory begins to slip from Theocratic control. This can only make the Theocracy more desperate to win...and more dangerous to fight.

After a mission to liberate an occupied planet ends in nuclear devastation, Kat Falcone - now a commodore in command of HMS Queen Elizabeth - sees firsthand just how far the enemy will go. Suddenly dealing with the war effort and a humanitarian crisis, many in the Commonwealth want a truce. Kat wants something else: to crush the Theocracy outright - and quickly.

Kat devises Operation Hammer, an all-out assault on the enemy home planet, Ahura Mazda. It is a bold and risky plan, but the enemy has revealed there can be no middle ground. Can Kat break the galactic stalemate and deal a death blow to the Theocracy? As two empires prepare to fight the largest space battle in history, Kat must trust her instincts to save her people and avoid oblivion.

4.5 out of 5 stars
4.5 out of 5
511 global ratings
How are ratings calculated?
To calculate the overall star rating and percentage breakdown by star, we don’t use a simple average. Instead, our system considers things like how recent a review is and if the reviewer bought the item on Amazon. It also analyses reviews to verify trustworthiness.
Top reviews

Steve
3.0 out of 5 stars not as good as book 3
Reviewed in the United Kingdom on 5 February 2018
Verified Purchase
This was a good read but a little predictable. Whereas in earlier books Kat acted like Captain Kirk (rolled up her sleeves and got stuck in) this time she behaves like the person in charge of a vessel or vessel. The action happens on the ground with marines and in near space with the opposing fleets. Unlike other reviewers I didn't like the battle descriptions. Firstly, they were utterly formulaic ad secondly, although we were given an overview of the battle plans upon passing the gap, hardly any of the individual tasks were described, concentrating on Kat and Sir William (more often referred to just as William in this book for some reason).
But what really ruined this book for me was the constant repetition of the reflections, thoughts and predicted outcomes of both the goodies and baddies. It's as if the author was convinced that his readers are all a bit thick and the core messages had to be drummed in to the readers.
Read more
2 people found this helpful
Report abuse

R F Adams
3.0 out of 5 stars Very formulaic
Reviewed in the United Kingdom on 29 October 2017
Verified Purchase
I enjoyed the series and the plotting is at least consistent. The characters are paper thin we don't even know what most of the protagonists look like. Except the heroine's breasts which get an embarrassing number of mentions. Other than that everything is standard, we have an evil empire based crudely on Islam, we have a Commonwealth more or less based on the British Empire. We have a King who is there seemingly without power structure and a few of those old standbys Dukes and so forth. The author is very poor at controlling the authorial voice and keeps dropping into people's heads so we know what they are thinking directly rather than having to work things out by their utterances as you have to in real life. This gives rather a feel of a history reported by many voices and removes all possibility of mystery and means that the story has little tension and doesn't grip as well as it should...lE we know too much. The Sci Fi hardware is very out of date and lifted wholesale from books written fifty years ago. Basically the author has no original ideas at all or even interesting reworking of old ones. However this still makes the books a whole lot better than most of the junk out there and is at least entertaining.
Read more
3 people found this helpful
Report abuse

Kevin J Stace
4.0 out of 5 stars Good story but a couple of minor niggles
Reviewed in the United Kingdom on 18 July 2017
Verified Purchase
Having read the whole series to date I have to say that overall I have enjoyed it. The pretext that society is based on a capitalist class system with aristocratic status being primary in determining role seems to me fanciful and slightly out of true given our own current direction in society is outmoding such thoughts. The main bugbear I had was the constant doubts in the minds of the main characters. The author seems to me to spend an inordinate amount of column inches on this and it does become wearing after a while. Plug through it though and the ongoing story is well laid out and entertaining.
Read more
One person found this helpful
Report abuse

N. Payne
5.0 out of 5 stars Great Series
Reviewed in the United Kingdom on 20 June 2020
Verified Purchase
I only give five star ratings for Mr Nuttall because I like his stories and the characters having read quite a few of them already I'm having trouble writing a review for each book, if you like this type of sci-fi and I do, you will also.
Read more
Report abuse

crbuk...
3.0 out of 5 stars A series of 4 longwinded books . That has areas of good stuff.
Reviewed in the United Kingdom on 16 April 2019
Verified Purchase
I've read all 4 books. The story is a really good one but the amount of wasted description during the story let's it down.
That is the case for all these books.
Price was cheap though. A bit of editing could produce just 2 books instead of 4 .
Read more
One person found this helpful
Report abuse
See all reviews