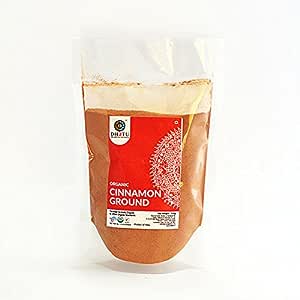 Item is in your Cart

There was a problem adding this item to Cart. Please try again later.
We do not have any recommendations at this time
Continue shopping

Amazon Delivered
Amazon directly manages delivery for this product. Order delivery tracking to your doorstep is available.
Only 2 left in stock.
Sold by Think Organic.
This is a Vegetarian product.

While we work to ensure that product information is correct, on occasion manufacturers may alter their ingredient lists. Actual product packaging and materials may contain more and/or different information than that shown on our web site. We recommend that you do not solely rely on the information presented and that you always read labels, warnings, and directions before using or consuming a product. For additional information about a product, please contact the manufacturer.

Cinnamon is powerful spices which acts as a antioxidant. It also help boasts wide range of health benefits such as antibacterial and anti-fungal properties. Cinnamon has long been used as a home remedy that will help reduce heartburn, indigestion and nausea. In Ayurveda, it is recommended for common cold, cough or congestion and sore throats. Use it in masala tea, curries, as a baking spice, in desserts, soups and pickling fruits.

3.8 out of 5 stars
3.8 out of 5
2 global ratings
How are ratings calculated?
To calculate the overall star rating and percentage breakdown by star, we don’t use a simple average. Instead, our system considers things like how recent a review is and if the reviewer bought the item on Amazon. It also analyses reviews to verify trustworthiness.