Diary Of A Wimpy Kid (Book 1) and over 2 million other books are available for Amazon Kindle . Learn more
Share <Embed>
Have one to sell? Sell on Amazon
Flip to back Flip to front
Listen Playing... Paused   You're listening to a sample of the Audible audio edition.
Learn more.
See all 6 images 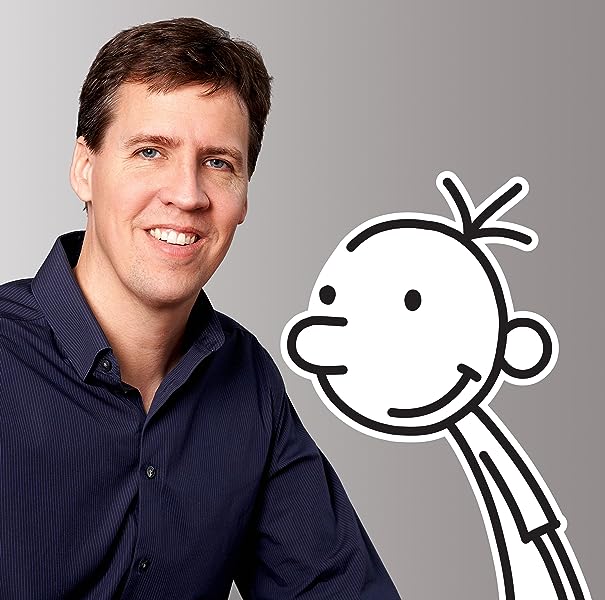 There is a newer edition of this item:

Explore our wide range of picture books that will help in broadening the horizon of your child's knowledge. Shop now
Read more Read less
click to open popover

The first year in the middle-school life of Greg Heffley is chronicled in this laugh-out-loud novel that first appeared on the Internet. Greg tells his story in a series of short, episodic chapters. Most revolve around the adolescent male curse: the need to do incredibly dumb things because they seem to be a good idea at the time. Yet, unlike some other books about kids of this age, there's no sense of a slightly condescending adult writer behind the main character. At every moment, Greg seems real, and the engrossed reader will even occasionally see the logic in some of his choices. Greatly adding to the humor are Kinney's cartoons, which appear on every page. The simple line drawings perfectly capture archetypes of growing up, such as a preschool-age little brother, out-of-touch teachers, and an assortment of class nerds. Lots of fun throughout. Todd Morning
Copyright © American Library Association. All rights reserved

Jeff Kinney was raised in Maryland, USA. In his mid 20's, Jeff Kinney decided to write a book loosely based on his childhood that would encapsulate the funniest things that happened to him and his family over the years. He had never intended to run Diary of a Wimpy Kid on the Web, but the opportunity came up to post his story on funbrain.com as he was developing it. The book launched in May 2004 and has since had over 20 million visitors. Jeff Kinney married his wife, Julie, in 1998 and the couple has two sons. He and his family now live in Plainville, Massachusetts.

Start reading Diary Of A Wimpy Kid (Book 1) on your Kindle in under a minute.

Zakir
5.0 out of 5 stars Age no matter
16 May 2017
Format: PaperbackVerified Purchase
So nice
I'm 24 and like to read this book

Nellie Bly
5.0 out of 5 stars Pleasantly surprised!
21 November 2014
Format: PaperbackVerified Purchase
Wow. The packaging was great and the product quality was great too! I really can't believe how I got this book at such a low price. Especially since it's not a pirated copy. It's the original book. When I saw the book and its price, I was wondering if it was one of those promotional Wimpy Kid notebooks. But it's not! It's the story book. And of course, the book is greatly enjoyable. :D
Read more
28 people found this helpful
Helpful
Comment Report abuse

Kiran
1.0 out of 5 stars Not suitable for 9 year old
10 July 2019
Format: PaperbackVerified Purchase
Got the book looking at the reviews for my daughter. The book description says suitable for 9 to 12 years. Don't know about 12 years, but definitely not suitable for 9 year old ( 4th grader) . Read the first four to five pages and you will understand what I mean- there are references to "hot girls", "butts" etc... Should be a good read for older kids.
Read more
2 people found this helpful
Helpful
Comment Report abuse

chiranjeevi rao
5.0 out of 5 stars cheese touch
12 October 2016
Format: PaperbackVerified Purchase
This book was osam I ever read I loved it it was about how the cheese touch came and went it simply cool.......😎😎😎
Read more
9 people found this helpful
Helpful
Comment Report abuse

Sreerag S
4.0 out of 5 stars Quick and fun read.
16 October 2019
Format: PaperbackVerified Purchase
Loved the illustrations and the fonts used.
Book is kinda funny to read even though you are an adult. It's a quick read and would be appropriate for any kid above 10.
Read more

Amazon Customer
4.0 out of 5 stars No Bookmarks
31 May 2016
Format: PaperbackVerified Purchase
Recieved book before 2 days from deadline date
Delivery is fast and quality of product is also good. But i received no bookmarks with the book which was kinda unexpected.
The book is funny and enjoyable,on first day itself i read about 50 pages at single sitting
The book is definitely addicting
Read more
4 people found this helpful
Helpful
Comment Report abuse
There are 479 customer reviews and 582 customer ratings.
See all 479 customer reviews
Write a product review

Go to Amazon.com to see all 2,434 reviews 4.6 out of 5 stars
Unlimited FREE fast delivery, video streaming & more
Prime members enjoy unlimited free, fast delivery on eligible items, video streaming, ad-free music, exclusive access to deals & more.
> Get started
Back to top
Get to Know Us
Connect with Us
Make Money with Us
Let Us Help You
EnglishChoose a language for shopping.
© 1996-2020, Amazon.com, Inc. or its affiliates