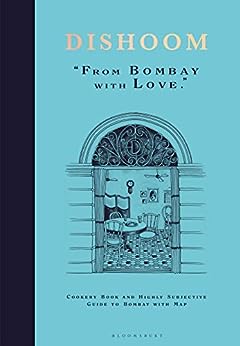 Dishoom: The first ever cookbook from the much-loved Indian restaurant Kindle Edition

A love letter to Bombay told through food and stories, including their legendary black daal

This book is a total delight. The photography, the recipes and above all, the stories. I've never read a book that has made me look so longingly at my suitcase

There are few cookbooks that immerse you in their subject so thoroughly and so lovingly as Dishoom. Part travel guide, part history, part food manual, this reads like a personal diary with a stonking recipe collection as a bonus. I could eat the Mattar Paneer every week and I probably will, with a Chilli Cheese Toast chaser

Like its carefully observed, pitch perfect restaurants, Dishoom's cookbook is a feast for all the senses, and brings the restaurant's delicious dishes into the home kitchen. Every page is begging to be pored over and cooked from, each picture leaping from the page with atmosphere and generosity. It's a gorgeous thing

The results prove worth it every time, and the book is a pleasure to read (Daily Telegraph)

Over 100 comfort food recipes - inspired by Parsi, Muslim, Hindu and Christian traditions - take you from dawn till dusk, starting with breakfast and ending with dinner and a nightcap. Given the time, I'd cook every single one of them (BBC Good Food Magazine)

Dishoom: From Bombay with Love is a delightful read. Even if you're just after the secret of the bacon naan (Caterer)

These brilliant, easy-to-follow recipes are a virtual tour of the city's best eating and drinking spots

This cookbook would be top of my Christmas list (Daily Express)

A book for the masses (Caterer)

The cookbook we've been waiting for (Women's Health)

As good as any travel book, if not better (Mail on Sunday)

It truly is a feast, not only for the stomach, but also the eyes (Sunday Post)

This splendid book is both a loving tribute to the city and a sumptuous guide to Dishoom specialties. An irresistible book for any lover of Indian food (Daily Mail)

For step-by-step recipes and fabulous traveller's tales, you'll have to buy this book (Oldie) --This text refers to the hardcover edition.

Dishoom serves a much-loved menu of Bombay comfort food and award-winning drinks in beautiful restaurants that each have a unique story. The first Dishoom opened in Covent Garden in 2010, and there are now five restaurants in London, one in Edinburgh, and one in Manchester. Dishoom breaks down barriers by bringing people together over food and drink: in its restaurants, at its events, and through charity (donating a meal for every meal, with 8 million meals donated so far).

Shamil and Kavi Thakrar are co-founders of Dishoom and Naved Nasir is Executive Chef. Shamil and Kavi grew up in London, but have spent many years becoming deeply acquainted with Bombay's flavours and quirks and falling in love with the city. Naved worked in various renowned restaurants in Bombay before moving to London to open Dishoom. This is their first cookbook.

An eccentric and charming cookbook from Dishoom, with over 100 recipes from the much-loved restaurants --This text refers to the hardcover edition.
Read more

4.8 out of 5 stars
4.8 out of 5
5,670 global ratings
How are ratings calculated?
To calculate the overall star rating and percentage breakdown by star, we don’t use a simple average. Instead, our system considers things like how recent a review is and if the reviewer bought the item on Amazon. It also analyses reviews to verify trustworthiness.

Ivan Arthur
1.0 out of 5 stars book badly damaged. Looks old and dogeared.
Reviewed in India on 25 February 2021
Verified Purchase
The book cover is damaged. It looks old. Unfortunately it arrived when I was out of station and I was not able to inspect the book on arrival. I saw the book after the return deadline Please exchange it for a new copy.
Read more
3 people found this helpful
Helpful
Report abuse

Kalesh Kumar S G
5.0 out of 5 stars I wish all cookbooks were like this
Reviewed in India on 28 October 2020
Verified Purchase
This is a fantastic book. I wish all cook books were like this. I am from the south of India, but this book makes you fall in love with South Mumbai. The photographs and the write ups - in addition to the recipes - are to be experienced. It was such a joy to read this book.
Read more
Helpful
Report abuse

Poornima N.
4.0 out of 5 stars Not a fresh copy
Reviewed in India on 5 June 2020
Verified Purchase
I was looking forward to reading this book. Alas the copy I received wasn't a new one.
Read more

4.0 out of 5 stars Not a fresh copy
By Poornima N. on 5 June 2020
I was looking forward to reading this book. Alas the copy I received wasn't a new one.
Images in this review

5.0 out of 5 stars Dishoom
By Rama Krishna Cherukuri on 8 October 2019
Excellent, unstoppable
Images in this review

Shivam
5.0 out of 5 stars The recipes are so apt
Reviewed in India on 23 June 2021
Verified Purchase
One of the finest books on Parsi cuisine and the culture of Bombay.
Read more
Helpful
Report abuse

Delia H.
1.0 out of 5 stars Damaged
Reviewed in India on 26 January 2020
Verified Purchase
The book is damaged. Can I get it replaced ? Apart from the damage a great travel cook book .looking forward to an undamaged copy
Read more
One person found this helpful
Helpful
Report abuse
See all reviews

Steve
2.0 out of 5 stars Beautifully presented - Don't believe the HYPE!
Reviewed in the United Kingdom on 26 September 2019
Verified Purchase
It is a beautifully presented book. The history and photography top draw (2 stars). However the recipes are not very good. I have made the achari paneer, the prawn molee and crispy okra. Not very good at all, a waste of time and ingredients. I love the restaurant but recipes don't translate well, I am an experienced cook. If your looking for an Indian cookbook in same style of relaxed South Indian regional cooking then I recommend Vivek Singh "Spice at Home". Rick Stein "India" is still the best all rounder. If you want recipes to work which become part of your repertoire, I would recommend you take my advice. Sorry guys at Dishoom.
Read more
193 people found this helpful
Report abuse

Only me
3.0 out of 5 stars Initial disappointment
Reviewed in the United Kingdom on 6 September 2019
Verified Purchase
I’d really looked forward to this book being published. It will probably appeal to a wide audience but I am unsure if I will keep the book. It’s part ode to Bombay, part cookbook. The first recipe is on page 36. For someone who cooks quickly, it isn’t easy to navigate through the book. Between every brief section of recipes there are multiple pages of travelogue and photos. For those interested in the history and culture of the city this will be of interested. I however just want to be able to access recipes quickly to cook family meals.
Read more
97 people found this helpful
Report abuse

Design Junkie
5.0 out of 5 stars “For something to truly succeed, it must have a little poetry at the heart of it”
Reviewed in the United Kingdom on 5 September 2019
Verified Purchase
As an avid - almost compulsive - collector of recipe books, I have to say that this is a truly wonderful book. The recipes, the stories, the illustrations, the design, the aesthetic presentation, the sheer volume of information and inspiration is astounding. Dishoom - yet again you have outdone yourselves. Fantastic. Without a doubt, Rashmi Thakrar, wherever he might be, is extremely proud.
Read more
51 people found this helpful
Report abuse

SR
5.0 out of 5 stars Very high quality book with amazing recipes
Reviewed in the United Kingdom on 18 September 2019
Verified Purchase
I dont normally write a review this quickly but honestly I am so happy with this cookbook
I absolutely love Dishoom and I'm so happy that some of my fave dishes are in this cookbook (lamb chops, vada Pau and gunpowder potatoes etc.)

For me I'm just interested in the recipes themselves and not the history behind it but if I get time I will defo check it out.

I like how I've seen that some recipes it will offer an alternative e.g. 12 fresh curry leaves OR 3tsp dried curry leaves. For me, that's helpful!

I'm Asian myself but I am absolutely cack at cooking asian dishes but these recipes are really detailed and tell you how to make everything including any spice blends they add.

OH and a nice little thing they have towards the end are menu ideas! So for Eid or Diwali etc., gives you some inspiration on what to dishes to cook which I think is nice.

I am honestly so excited to cook all my favourites, I might finally be a decent cook :) I think I'm most excited about the chops.... the fact that I can have them whenever I want.... the dream

Bookworm
5.0 out of 5 stars Wonderful recipes and stories too .
Reviewed in the United Kingdom on 5 September 2019
Verified Purchase
I received this today and love the way it has been written- it not only has recipes that make me want to head for the kitchen ,it is also a loving description of Bombay and the writers' lives . Truly exceptional .I do have one complaint ...no recipe for those beautiful cloud-soft rolls that accompany breakfast and chai .
Read more
37 people found this helpful
Report abuse
See all reviews