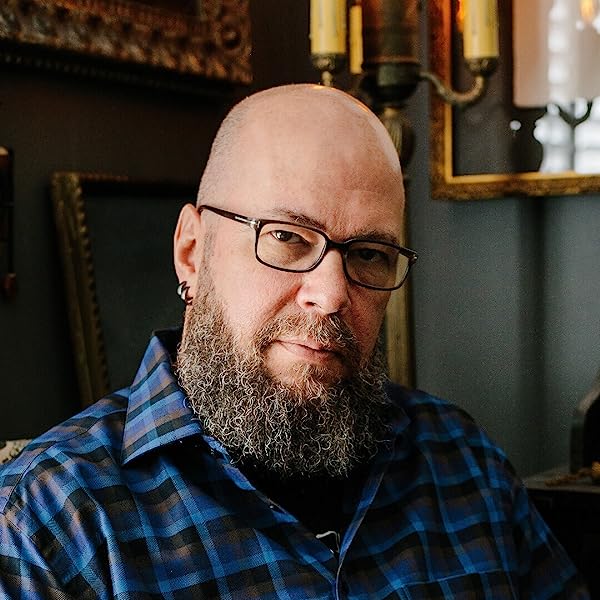 by Jason Aaron (Author), Chris Bachalo (Illustrator)
4.5 out of 5 stars 575 ratings
See all formats and editions
Sorry, there was a problem loading this page. Try again.

Who do you call when things are coming out of your dreams and trying to kill you? Or when your daughter is cursing in Latin and walking like a spider? Or when your dog keeps screaming at you to strangle your neighbors? Doctor Strange, of course. He's the only person standing between us and the forces of darkness, but has he been paying his tab? Every act of magic has a cost and Jason Aaron (THOR, ORIGINAL SIN) and Chris Bachalo (UNCANNY X-MEN) are going to put Stephen Strange through hell to even the scales.

JASON AARON is an award-winning comic book writer best known for his work with Marvel Comics, including a landmark seven-year run on THOR that will serve as the basis for the upcoming Marvel Studios film THOR: LOVE AND THUNDER. He’s also had celebrated stints writing WOLVERINE, DOCTOR STRANGE, GHOST RIDER, CONAN THE BARBARIAN and the 2015 Marvel relaunch of STAR WARS that was the best-selling American comic book in more than 20 years. Aaron is the current writer on Marvel's flagship AVENGERS book and its spinoff, AVENGERS FOREVER, along with a brand-new, character-defining PUNISHER series. His critically acclaimed creator-owned work includes the Eisner and Harvey Award-winning SOUTHERN BASTARDS from Image Comics and the New York Times best-selling crime series SCALPED from Vertigo Comics. Aaron was born and raised in Alabama and currently resides in Kansas City.

4.5 out of 5 stars
4.5 out of 5
575 global ratings
How are ratings calculated?
To calculate the overall star rating and percentage breakdown by star, we don’t use a simple average. Instead, our system considers things like how recent a review is and if the reviewer bought the item on Amazon. It also analyses reviews to verify trustworthiness.

Savio sherry
5.0 out of 5 stars Fantastic
Reviewed in India 🇮🇳 on 23 January 2021
Verified Purchase
Nice book. If you are a fan of doctor strange then go for it.
Read more
Helpful
Report abuse

Sayari Ghosh
1.0 out of 5 stars Waste of money...
Reviewed in India 🇮🇳 on 6 May 2019
Verified Purchase
The illustrations are good. However the price is too high according to its size.
Read more
One person found this helpful
Helpful
Report abuse
See all reviews

Angus Begg
5.0 out of 5 stars This is brilliant!
Reviewed in the United Kingdom 🇬🇧 on 17 May 2016
Verified Purchase
I think this is one of Marvels best titles out there right now. Granted, I've read the other reviews and if you're an old school fan and/or married to unerring narrative then it wont be perfect for you. But I'm less familiar with Doc Strange and in a rebooted marvel universe, it makes sense to me that the character should be reborn. That aside I actually find the storyline impressive, intelligent and gripping. It doesn't conform to the normative 5 issue arc, there are multiple branches emerging from what I agree feels like a prologue, but that's okay. I am fascinated by this witty and quite beautiful exploration of this quite mysterious character, and the world that Aaron is creating I think is an exciting one. I love the artwork. I've never been a fan of Chris Bachalo but his style is perfect for this and the depth and range of what's on the panels is gorgeous. Even the issue covers, in the style of classic Doctor Strange depictions is a very nice touch indeed. I think this is a charming and brilliant read and I look forward to what I hope will be a fulfilling series.
Read more
8 people found this helpful
Report abuse

PaulC
5.0 out of 5 stars Absolutely excellent take on the good doctor
Reviewed in the United Kingdom 🇬🇧 on 15 August 2016
Verified Purchase
Well, this was a real surprise. Picked this up not expecting much and was blown away. Aaron has a completely new twist on the good doctor and it works! The sublime artwork by Bachalo helps, of course, but it is the storyline, the way in which Strange's relationship with the mystical world around us is handled and the whole really unique ethos applied to a jaded character that makes this so good. Not since Steve Ditko's work on portraying other dimensions have I seen anything to compare with Bachalo's take on the other dimensions.

Bart
5.0 out of 5 stars Loved it!
Reviewed in the United Kingdom 🇬🇧 on 3 July 2020
Verified Purchase
Love the story and art! Doctor Strange is one of my favourite Marvel characters so it was a must to have it!
Read more
One person found this helpful
Report abuse

Kindle Customer
5.0 out of 5 stars My first foray in to the great doctor's work
Reviewed in the United Kingdom 🇬🇧 on 7 November 2016
Verified Purchase
The graphics need a decent screen resolution tablet to view, the zoom in mode works well. Great story introducing the character and his troubling dilemma. Doesn't overly clash with the recent movie. To think that I wanted to be magic once....
Read more
Report abuse
See all reviews