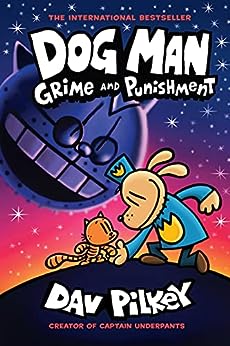 * "Readers (of any age) will be giggling from start to finish." -- Publishers Weekly, starred review

* "Action-oriented cartoons... Laffs aplenty." -- Kirkus Reviews, starred review
--This text refers to an out of print or unavailable edition of this title.

The Adventures of Super Diaper Baby, published in 2002, was the first complete graphic novel spin-off from the Captain Underpants series and appeared at #6 on the USA Today bestseller list for all books, both adult and children's, and was also a New York Times bestseller. It was followed by Super Diaper Baby 2: The Invasion of the Potty Snatchers, also a USA Today bestseller. The unconventional style of these graphic novels is intended to encourage uninhibited creativity in kids.

His stories are semi-autobiographical and explore universal themes that celebrate friendship, tolerance, and the triumph of the good-hearted.

Dav loves to kayak in the Pacific Northwest with his wife.

4.6 out of 5 stars
4.6 out of 5
1,961 global ratings
How are ratings calculated?
To calculate the overall star rating and percentage breakdown by star, we don’t use a simple average. Instead, our system considers things like how recent a review is and if the reviewer bought the item on Amazon. It also analyses reviews to verify trustworthiness.
Top reviews

Abraham Jose
5.0 out of 5 stars amazing
Reviewed in India on 19 June 2021
Verified Purchase
the person who said its a book for 7 year olds and not for 10 or 11 year old then SHAME ON YOU FOR SAYING THAT!How dare you?!the author took hard work on making this and its rlly good.And what have you made?i bet whatever you made is nothing close to being better than this.and also this book can be read by anyone.You dont deserve to read this book.there is no law saying that only 7 yr olds can read this and not 10.you should be rlly ashamed of yourself.what a disrespectful jerk.even a 7 yr old is better than you.and plus its a good thing he made pictures because it helps us know how the character looks.
Read more
One person found this helpful
Helpful
Report abuse

anusha vinod kumar
5.0 out of 5 stars BEST BOOK EVER!!!
Reviewed in India on 18 September 2020
Verified Purchase
So awesome book!You should buy this book!!but one thing,why did the chief make Dog Man a evil cat??I was thinking that was the mayor a villian in the book!when those two cops said"Get lost and don't ever come back!!!"If Dog Man was a pro,he will write in a paper"Shut up!!!"and go away.but its still very emotional,I almost cried by reading the chapter"The saddest chapter ever written"and why did the mayor fire him for destroying the flower garden??at the final chapter,why did the mayor accuse Dog Man for his teddy bear??so the mayor was kind of a bad guy.I also downloaded Home Base™ on Google play and it took me 605 mb for the whole game.Don't install Home Base™.It eats a lot of mb!!!
Read more
Helpful
Report abuse

Abhishek A.
5.0 out of 5 stars to good
Reviewed in India on 1 September 2020
Verified Purchase
why is it to good? because it is funny;) buy it whatever price it is!! and am you best fan:) don't listen to the ones that don't like u!
Read more
One person found this helpful
Helpful
Report abuse

Anonymous
5.0 out of 5 stars 8t bes book in my opinion
Reviewed in India on 15 April 2021
Verified Purchase
amazing its sad and funny but if u are scared with the orice wait a week or 2 an they reduce the price to 100 to 250 price range so i suggst u buy it at that time but esides that i enjoy this very much an also it very popular i suggest u to buy this book
Read more
Helpful
Report abuse

Aparna
5.0 out of 5 stars Very creative
Reviewed in India on 3 September 2020
Verified Purchase
This was Very creative and emotional. It taught us so many thing Susan as love and forgiveness. I love this book and recommend it to everyone and their kids.
Read more
Helpful
Report abuse

Amazon Customer
5.0 out of 5 stars B lokeshwar
Reviewed in India on 30 September 2020
Verified Purchase
I think this is the best book in dog man series and petey was very very sweet to cat kid. I dont know why chief told to be bad cat man
Read more
Helpful
Report abuse

Saikat Gupta
5.0 out of 5 stars Wonderful. My 7 years kid liked it so much
Reviewed in India on 5 October 2020
Verified Purchase
My kid liked it very much.
Read more
Helpful
Report abuse
See all reviews

Peggy
5.0 out of 5 stars :P
Reviewed in the United Kingdom on 6 September 2020
Verified Purchase
really nice book love it so heart warming and funny 110% kid suitable :> its a pity that you had to wait a ouple months for it :/. but it was worth the wait :D!!
Read more
7 people found this helpful
Report abuse

Julie Lenihan
5.0 out of 5 stars Wow - another great book
Reviewed in the United Kingdom on 1 September 2020
Verified Purchase
A page turner - my kids couldn’t stop reading and laughing out loud x
Amazing yet again, just waiting for the next one

Twirlgirl679
3.0 out of 5 stars i mean…
Reviewed in the United Kingdom on 3 February 2021
Verified Purchase
welcome back to my reviws(well its the first official one)
i mean yeah dog man is so funny! the author has a really good idea on what kids seem to like.A lot of authours dont so well done dav! :)

BUT tgere us one thing i mean like yeah dog man is funny but its going downhill :( i mean yeah it was funny in some bits but fetch 22 is better.I mean im not tryna be negitive but its jokes are going dkwnhill :( also some parents would think dog man is rude because t has violence and rude jokes

Iknow this is long but thanks for reading :D

Monika L
5.0 out of 5 stars FABULOUS
Reviewed in the United Kingdom on 13 March 2021
Verified Purchase
This is an amazing book and there is no such thing as 40 dog-man books. It is so good it is my favourite dog-man book. I will also do all the other reviews. I have got every single dog-man book there is to have. Enjoy thisbook a lot because if you like comics then you're up. It has a chapter 'the saddest capter ever written' but then its ok again. So long now I've got other reviews to write.

CaptMac
3.0 out of 5 stars Your average Dav Pilkey book
Reviewed in the United Kingdom on 7 February 2021
Verified Purchase
Yeah this book is neet,nothing special but probaly worth a read if your a fan of Dav Pilkey.Neet storyline,funny jokes and fun charecters including!Snug Joey's powerful form remindinds mme of cupcake man Joey,Grampa is Petes Grampa not the best but of course...neet mostly dissapionting because of being a meh villan with meh homor.This book is nt perfect but nice.
Read more
Report abuse
See all reviews
Back to top
Get to Know Us
Connect with Us
Make Money with Us
Let Us Help You
EnglishChoose a language for shopping.
© 1996-2021, Amazon.com, Inc. or its affiliates